Wildflower of the Year 2000 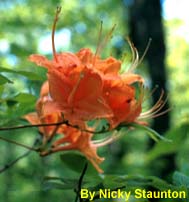 The generic name, Rhododendron, is Greek for “rose-tree.” All azaleas and rhododendrons, deciduous or evergreen, belong to this genus. The specific name, calendulaceum, means Calendula-colored, obviously referring to the flowers. Calendula is a common house and garden annual of the Aster Family. The early French botanist Andre Michaux, who botanized in North America in the late 1700s, discovered and first named this plant, describing it as new to science. The vernacular name, “flame” azalea, derives from not only the fiery color of the flowers but also the expanded, unopened buds, which suggest the flame of a candle.

Flame azalea, Rhododendron calendulaceum, is one of the most spectacular flowering shrubs of the Appalachian Mountains. A deciduous shrub up to 10 feet high and 15 feet wide with clusters of large yellow to orange flowers, this unusually colored azalea lights up woodland or wayside like a bush afire. Virginia can offer no finer native wildflower to usher in the Year 2000 than this striking highland beauty.

Rhododendron belongs to the cosmopolitan Heath Family, Ericaceae, which comprises about 100 genera and 3000 species, mostly shrubs. More than 200 species in over 30 genera are native or naturalized in the continental United States and Canada, including many other well known wildflowers such as heather, mountain-laurel, trailing-arbutus, and wintergreen. Numerous species of Rhododendron and other genera, notably Vaccinium (cranberries and blueberries), are economically important.

Rhododendron is a huge, worldwide genus of about 1200 species found principally in the north temperate zone, especially in eastern Asia. Flame azalea is one of about 30 azaleas and rhododendrons indigenous to North America. At least a dozen of these occur in the east, nine or ten in Virginia.

Flame azalea is an erect shrub with numerous spreading branches. The slender gray-brown twigs are hairy. The buds and deciduous leaves are alternate on the twigs but, as is typical of azaleas, may be crowded in a whorl near the tip of the twig. The buds have several yellowish-green scales with brown margins. The ovoid terminal buds, which are two or three times larger than the lateral leaf buds, produce the clusters of flowers. The leaves are oval or oblong to narrowly obovate or oblanceolate and up to 4 inches long and 2 inches wide, with hairs at least on the lower side. The leaf tip is acute, the base tapered.

The showy terminal clusters of 5-15 large flowers unfold with or before the expanding leaves. The blooms, which lack fragrance, vary in hue from pale yellow to flaming orange, often suffused with pink, but may be pink-to-scarlet, deep red, even white. Hybridization with other species does occur in nature, and the great spectrum in color is probably due in part to natural hybridization. The corolla is a funnel-shaped tube up to an inch long that flares at the top into five wide and showy, scarcely recurved lobes, which equal the tube in length. The open flower may be 2 inches across. It has sticky hairs on the outside. The five ruddy-colored stamens conspicuously burst from the corolla tube and project well beyond it. The dry fruit ripening from the single pistil is a five-celled, hairy capsule that may persist on the plant until the next growing season. Azaleas often carry clusters of these telltale fruits in winter.

Flame azalea is said to be the most widely cultivated native American species of azalea. It can be grown in Zones 5-8. This species is one of the parents of the well known Ghent Hybrids and Exbury Hybrids. In pure or hybrid form, this species provides an unusual accent showpiece in the garden. It is a cold-lover, and many of its propagated forms do well in the cooler parts of Virginia. In warmer places such as the Tidewater area, protection from the afternoon sun may be needed.

In nature the flame azalea grows in open deciduous woods, along woodland edges, and in fields under conditions of part shade or full sun. Nature’s conditions should be mimicked

Azaleas are shallow-rooted and transplant easily in spring or early fall if well balled with soil. The flame azalea thrives in acidic (pH 4-6.0), moist, well drained, sandy or loamy soil rich in organic matter, in habitats protected from winter’s harshest weather. A good mulch is recommended.

Although planting nursery stock is the easiest way to grow flame azalea, the species can be propagated by cuttings, layering, or seeds. Cuttings and separated layers cannot be set out until the second year. Seeds should be sown in shallow sandy peat, covered lightly with sand or peat, and kept moist at all times. For any of these methods, consult gardening books for specialized instructions on azalea propagation.

Rhododendron species are poisonous. There are no known medicinal uses.

Flame azalea grows in the mountains in open woods, waysides, grassy balds, and pastures from southeastern Ohio and West Virginia to Georgia and west to Kentucky, Tennessee, and Mississippi. It once was native to southwestern Pennsylvania and Alabama but apparently has been extirpated there. Across its range it flowers from March in the south to early July in the north.

It is indigenous to nearly all the mountain counties of central and southwestern Virginia, but widely cultivated (especially cultivars and hybrid forms) elsewhere in the state (see native distribution inAtlas of the Virginia Flora, III, 1992). In Virginia it usually blooms in June and early July. Look for it southward along the Blue Ridge Parkway.

Caution to gardeners
Gardeners should not collect flame azalea in the wild and should be certain that azalea and other native plants purchased for home gardens are nursery-propagated, not wild-collected. For a list of retail sources of nursery-propagated plants and responsibly collected seeds, send a self-addressed, stamped envelope to:
Text slightly expanded from 2000 Virginia Wildflower of the Year brochure.  Edited for the Web by Stanwyn G. Shetler, Dec. 20, 1999