Wildflower of the Year 1991

Derivation of Latin, the genus name, Lobelia, honors a Flemish herbalist, Matthias de L’Obel. The specific name, cardinalis, comes from a pre-Linnaean name for the genus, which means “of the Cardinal,” because the color and shape suggested a Roman Catholic Cardinal’s miter and robes; hence, also the common name, cardinal-flower.

Cardinal-flower is among Virginia’s most stunning native plants. The color of the flowers, one of the richest reds in nature, their unusual form, and their appearance in cool riparian habitats where their color is as unexpected as it is brilliant contribute to their startling impact.

The flowers also have a velvety texture and a complicated form that never fails to delight. Growing in dense racemes on 2-5′ stems, the irregular tubular flowers each have two lips; the upper lip splits into two lobes; the lower lip is deeply cleft into three. A long filament tube, formed of the flower’s stamens united around the style, projects through the slit in the upper lip and extends out beyond the corolla.. Each blossom is about 2″ long.

Cardinal-flower grows from basal rosettes, and its stems are usually unbranched. The lance-shaped to oblong leaves that alternate up these stems are 2-6″ long and have irregularly toothed edges. These deep green leaves often have a bronzy tint.

Other familiar members of the genus include the great blue lobelia (Lobelia siphilitica), the pale-spike or spiked lobelia (L. spicata). and Indian-tobacco (L. inflata). The cardinal-flower is the only red lobelia. And, strangely enough, lobelias are members of the Bluebell Family, Campanulaceae, although some put them in their own family, Lobeliaceae.

Discovering cardinal-flower in the wild during late summer is always a source of surprise and delight. Not only do the flowers stand out like spotlights in their wetland habitats, but their brilliance often shines across long distances. Water between the cardinal-flower and its admirer often makes a close approach impossible and adds to the plant’s allure in the wild.

Crossing a marsh. wet meadow, or stream to reach a cardinal-flower is no problem for the flower’s chief pollinators — hummingbirds. Attracted to the flowers, hummingbirds hover near them to probe with their long beaks for nectar at the base. The flower is so constructed that its shape assures service from the hummingbirds: pollen-bearing anthers at the end of the flower’s long filament tube baptize the head of the visiting hummingbird with pollen which it carries to the next flower. 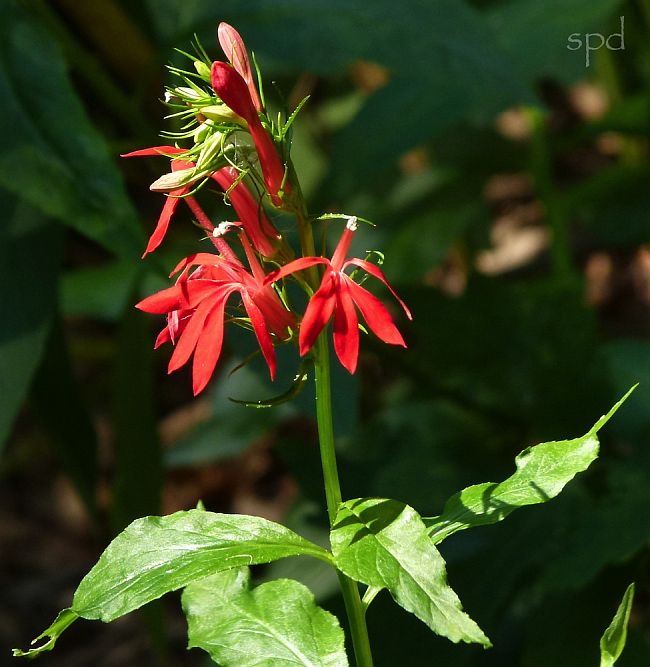 Cardinal-flower spreads both by perennial offshoots from the parent plant and by tiny seeds held in small round capsules along the stalk. Now and then a pink- or (rarely) a white-flowering form of the plant appears in the wild from these self– sown seeds. Other native plants that may occupy the same habitats cardinal-flower enjoys include jewelweed, turtlehead, Joe-pye-weed, and green-headed coneflower. Cardinal-flower is often found blooming alone, however.

Even in habitats congenial to it, cardinal-flower is seldom abundant, and it should never be picked or dug in the wild. Clearing, draining. and disturbing its wetland habitats are also serious threats. Protecting the habitats where cardinal-flower grows will ensure that this fascinating plant continues to surprise and delight in the wild.

Whether it’s planted in a damp area similar to its native habitat or in a traditional garden setting, cardinal-flower is one of the most spectacular natives we can grow in our gardens. Blooming in late July and into September, it’s a perfect choice for naturalizing in damp meadows and along streams and ponds with skunk-cabbage, jewelweed, turtlehead and Joe-pye-weed. The 2-5′ vivid red spires are equally lovely growing near a small garden pool or in a pot sunk into the water.

In a sunny bed or border where the soil has been amended with organic matter and stays fairly moist, it is striking with numerous native perennials including black-eyed Susan and boltonia. Plant it near outdoor sitting areas or in containers on a deck or patio to entice hummingbirds in for close-up viewing. Remember that the more sun cardinal-flower gets, the more water it needs.

A single clump of cardinal-flower is dramatic when used as an accent among low growing plants at the edge of a woodland or at the end of a shady path. In high, open shade or with just morning sun, it holds its color better than when grown in full sun. Good woodland companions are ferns, white wood aster, blue-stemmed goldenrod, hostas and astilbes.

Cardinal-flower’s evergreen basal leaves need exposure to the sun for continued photosynthesis through the winter. A mulch can be tucked underneath the leaves to protect the shallow roots through winter, but the plant may die if the basal rosettes are covered with leaves or mulch.

Plants may be short-lived, but cardinal-flower produces abundant seed, and seedlings will often be found near mature plants. The seeds germinate better after a two-month cold period and can be sown in an outdoor seed bed in the fall for spring germination or stored in the refrigerator and started indoors in late winter. Seedlings grow rather quickly, and a few may bloom the first year.

Medicinal uses of lobelias included treatment for syphilis and baldness.

You’ll find cardinal-flower blooming from late July into early September along streams and rivers and in low woods, marshes, and wet meadows. Its range extends from New Brunswick south to Florida and west to eastern Texas.

Where to See It in Virginia

In Virginia, according to the Atlas of the Virginia Flora (1992), cardinal-flower can be found in every county. Don’t expect to find large drifts of these wildflowers, however. It may be a solitary raceme that offers you a first glimpse of this dramatic native plant.

Gardeners should be sure that cardinal-flower and other native plants purchased for home gardens are nursery-propagated plants, not wild-collected.

For a list of retail sources of nursery-propagated plants and responsibly collected seed, visit our Plant Nursery Page.

Text from 1991 Virginia Wildflower of the Year brochure