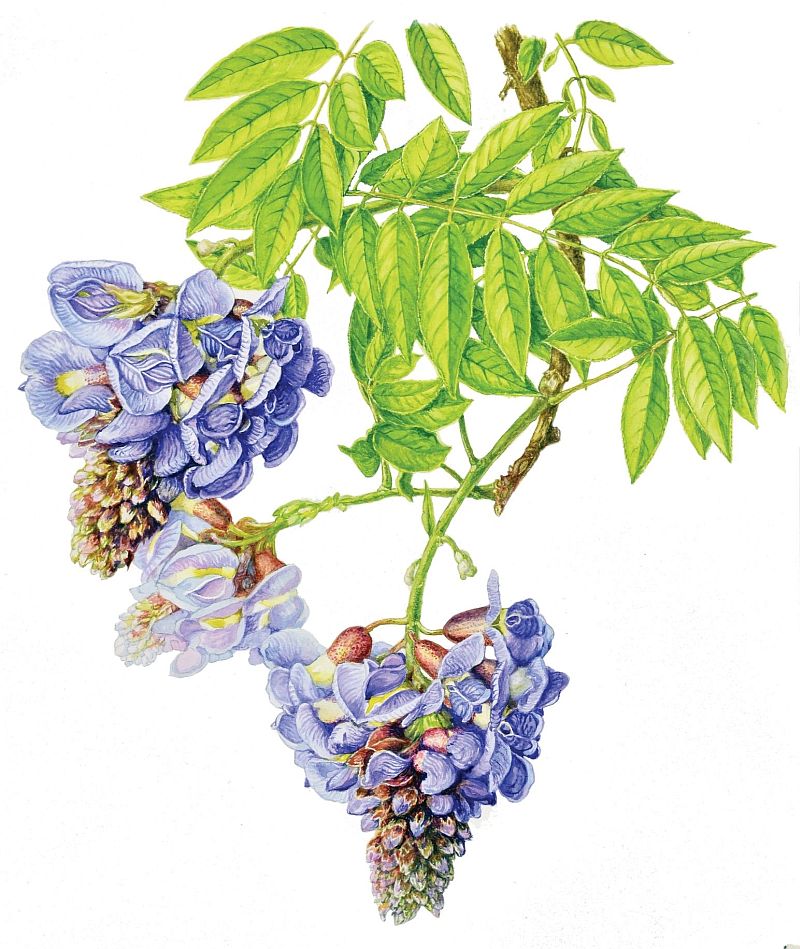 Wisteria frutescens is a woody liana, potentially growing to heights of 15 m; young stems are smooth or covered with small hairs pressed tightly to the stem surface. Stems climb by twining around supports in a clockwise direction. Leaves are alternate and odd-pinnately compound, 10—30 cm long. Leaves may have from 5 to 15 leaflets that are elliptic to lance-ovate in shape with acute to acuminate tips; leaflets are pubescent upon emergence in spring but become hairless as the season progresses. Densely flowered terminal racemes appear in late spring well after the appearance of leaves and sporadically throughout the summer; racemes range from 3 to 15 cm in length.

Flowers conform with the general pattern of papillionoid legumes, however, since the racemes are pendulous, individual flowers appear upside down relative to most such legumes. Sepals are fused into a cup-like calyx 5—7 mm long, the rim of which is irregularly and shallowly lobed. There is a single standard petal that reflexes backward and forms a broad semicircle 1.5 to 2 cm in diameter; paired wing petals are obovate and converge at their tips; two keel petals curve downward and terminate under the tips of the wing petals. Flower colors are subtly variable, but generally range through shades of violet and blue, with stronger reddish tones in the calyx and newly opened petals, and darker petal veins; further, standard petals bear a triangular yellowish central zone; white-flowered variants are known. Stamens are fully enclosed by the paired keel petals; nine of the ten stamens have filaments fused tube-like with the tenth stamen separate from the rest. Ovaries are solitary per flower, enclosed by the keel petals, and surrounded by staminal filaments; ovaries are stalked at the base and bear numerous ovules. Fruits (“legumes”) are elongate, linear, smooth, capsules bearing multiple reniform seeds. 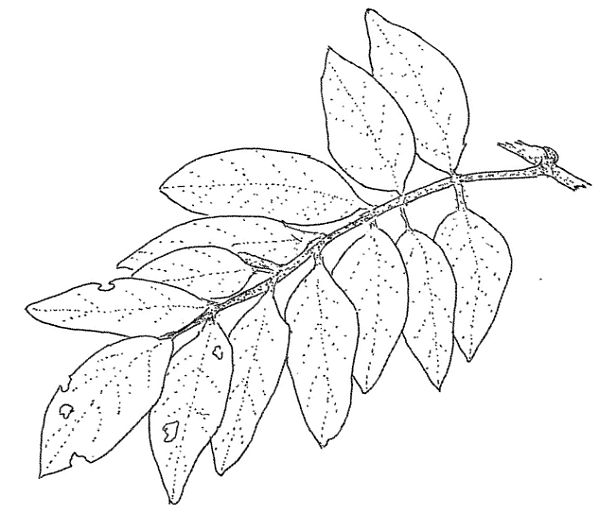 Wisteria species are members of the large and diverse family known as legumes (Fabaceae). American Wisteria is the first species of the genus to receive a formal scientific name, Glycine frutescens, in the 1753 Species Plantarum of Linnaeus. In 1818, Thomas Nuttall recognized this woody liana as distinct from Soybeans; Nuttall’s genus name, Wisteria, commemorates Caspar Wistar, late 18th/early 19th C physician and anatomist from Philadelphia. The species portion of the scientific name, frutescens, means shrubby. There are seven or eight species classified in the genus Wisteria; two species are native to eastern North America; the remainder are from eastern Asia. 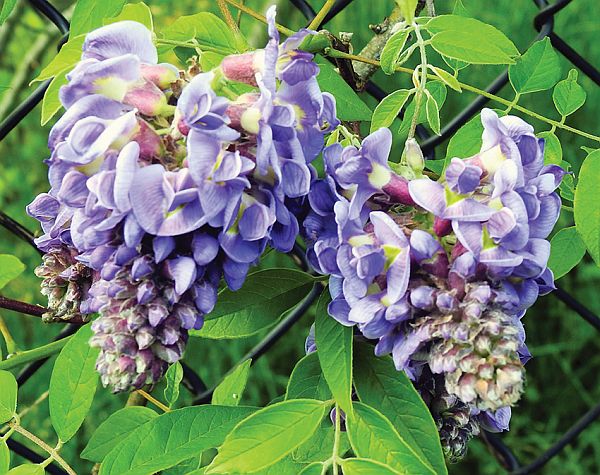 American Wisteria is a plant of easy garden culture; for best results provide a location in full or nearly full sun and water regularly during dry spells; it is hardy in USDA zones 5 through 9. It can be grown to flowering size in containers if provided with a trellis for support. Regular pruning is recommended to control long whip-like branches that develop by late summer. Wisteria frutescens is often recommended as a native substitute for commonly cultivated Asian species: Chinese Wisteria (W. sinensis), Japanese Wisteria (W. floribunda) or their all-too-frequently encountered spontaneous hybrid, W. x formosa; these Asian Wisterias are widely considered to be aggressively invasive. Wisteria frutescens can be propagated by seeds sown in fall or spring with no special pre-treatment needed, or by means of softwood cuttings taken in the spring. The most readily available cultivar is ‘Amethyst Falls,” selected from a wild source and noted for its vivid lavender flowers and reliable flower production in young plants. 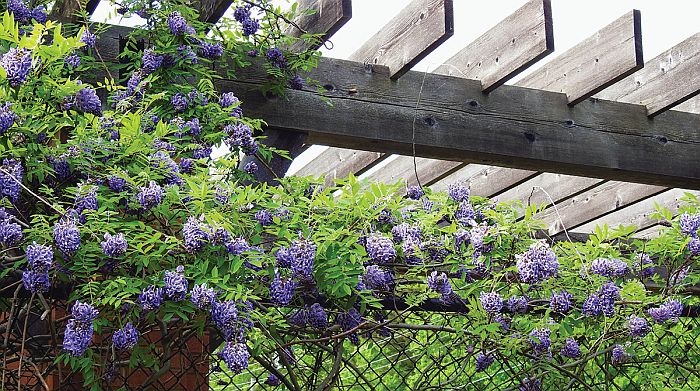 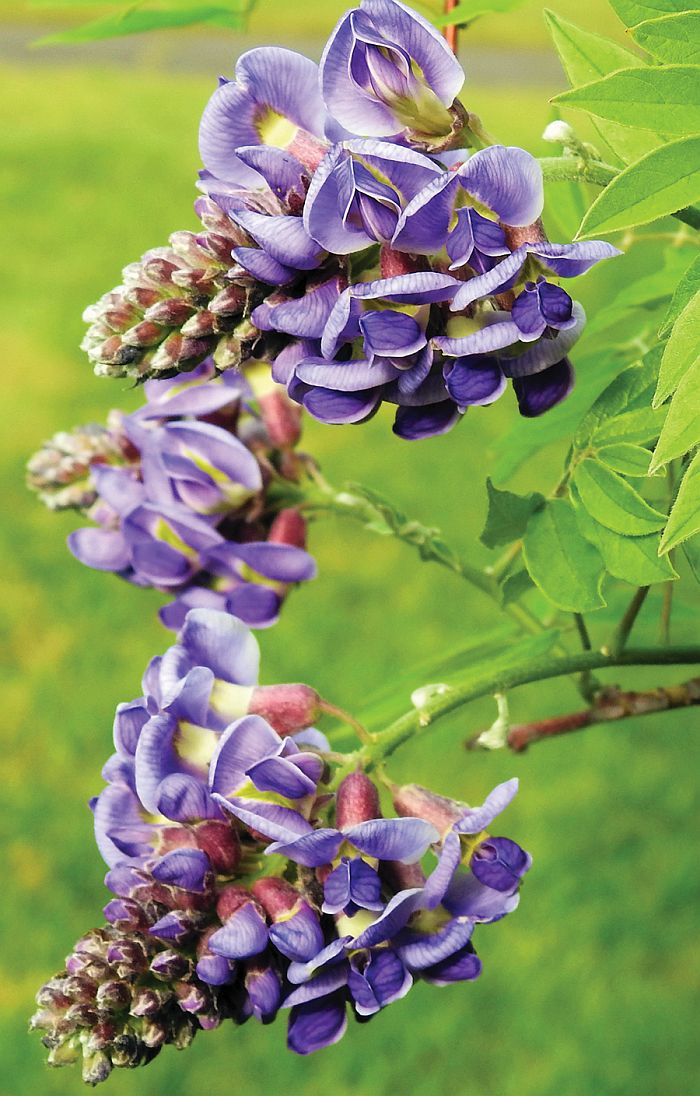 Numerous sources suggest eating Wisteria flowers in salads or extracting them via cold water to produce a cooling beverage. Caution, however, is advised because Wisteria species do contain several known toxins. Roots, bark, branches, fruits, and seeds contain triterpene-based saponins that will cause gastro-intestinal distress. Seeds also contain canavanine, a molecule that, if ingested, can disrupt the synthesis of proteins, resulting in impairment of multiple life processes.

The Virginia Division of Natural Heritage characterizes conservation status of Wisteria frutescens as G5, S1, meaning that the species is considered secure given its abundance throughout its entire geographic range, but critically imperiled in Virginia where the species occurs at the northern fringe of that range.

Where to see it

Aside from cultivated specimens which can be found in many public and private gardens, wild plants of Wisteria frutescens occur in scattered localities found in just nine counties of southeast Virginia.

Gardeners should not collect American Wisteria in the wild and should be certain that all native plants purchased for home gardens have been nursery-propagated, not wild-collected. For a list of retail sources of nursery-propagated plants and responsibly collected seeds, visit https://vnps.org, email info@vnps.org, or call 540-837-1600.
To see and learn more about interesting species of plants native to Virginia, visit https://vnps.org and contact your local chapter of VNPS (https://vnps.org/chapters) for times and dates of programs and wildflower walks in your area.