Wildflower of the Year 1998

Aquilegia is a Latin word of uncertain origin; probably, it was derived from aquilegus, meaning “water collector,” in allusion to the fluid at the base of the petal’s spur, but perhaps from aquila, an eagle, because the spurs suggested the talons of an eagle to Linnaeus. “Columbine” comes from the Latin for dove (columba), the spurred petals perhaps having suggested a ring of doves around a fountain.

Few spring wildflowers possess such poetic beauty or evoke such sentiment as wild columbine (Aquilegia canadensis). Its flowers, as one writer puts it, have airy grace and ornamental poise, dancing, as another says, in red and yellow petticoats to the rhythm of the breeze along rock ledges. In the wild or in the garden, this widely distributed, singular beauty of rocky woodlands and cliffs ranks high in Virginia’s treasury of native wildflowers.

Aquilegia is a genus of the buttercup family, the Ranunculaceae, comprising worldwide about 60 genera and 2500 species. In the United States and Canada, 18 genera and over 250 species are indigenous; especially notable genera are Anemone (anemones and windflowers), Aquilegia (columbines), Clematis, Delphinium (larkspurs), Ranunculus (buttercups), and Thalictrum (meadow-rues). The distribution of the family is centered in the cooler temperate regions of the northern hemisphere. Most species are herbaceous perennials; a few are shrubs or vines. The buttercup family is important for its many ornamentals, including anemones, buttercups, clematises, columbines, globeflowers, hellebores, larkspurs, and peonies.

A circumboreal group of about 70 species, the genus is represented in North America by 20 native species. Nearly every state has at least one species. Many Eurasian species and hybrids are cultivated in North America, but only the European A. vulgaris, which has many horticultural varieties and hybrids, escapes sometimes from cultivation and naturalizes here. Columbines are highly variable, and even the most distantly related species hybridize freely in nature as well as in the garden, making it difficult to delimit the species within the genus. Wild columbine is the only species native to eastern North America and the only species in Virginia, native or naturalized.

Wild columbine is a delicate but hardy perennial herb with thin, woody rhizomes and slender, much-branched stems. The plants typically grow 1-2 feet tall, but may reach 3 feet or more. The delicate leaves are both basal and alternate on the stem and 1-3 times compound, with each division in threes. The leaves at the base and on the lower stem are large (to a foot long) with long primary and secondary stalks but become much reduced upward. The small leaflets, in threes, are more or less oval with rounded teeth or lobes.

The showy, spurred flowers, nodding at the tips of slender branches with the spurs pointing upward, are 1-2 inches long and bright red to pinkish with yellow insides. The flower consists of five tubular, red petals with yellow lips alternating with five flat, reddish sepals; numerous yellow stamens, projecting downward like a golden tassel well beyond the petals and sepals; and five green pistils with long thin styles, surrounded by the stamens. The distinctive petals, which look like tiny cornucopias, Columbine Flowers extend backward into long hollow spurs ending in nectar-filled knobs. Not all of the stamens are fertile. The five erect, long-beaked fruits that mature from the pistils are dry pods, called follicles, which split along the inner side to shed their numerous, shiny black seeds.

As the long, nectar-bearing spurs indicate, the flower is adapted to long-tongued nectar-feeders, notably hawk moths and hummingbirds. The constriction in the funnel-shaped spur just below the secreting bulbous tip undoubtedly prevents small bees from getting at the nectar. The association between wild columbine and the eastern North American ruby-throated hummingbird, which is attracted to red flowers, is well known. Wherever there is a colony of columbines, the hummingbird is likely to be seen regularly, as, in the words of one person, it “flashes like thought” among the flowers, draining all the inverted cornucopias. The yellow inside the petal may serve as a guide to the nectar. 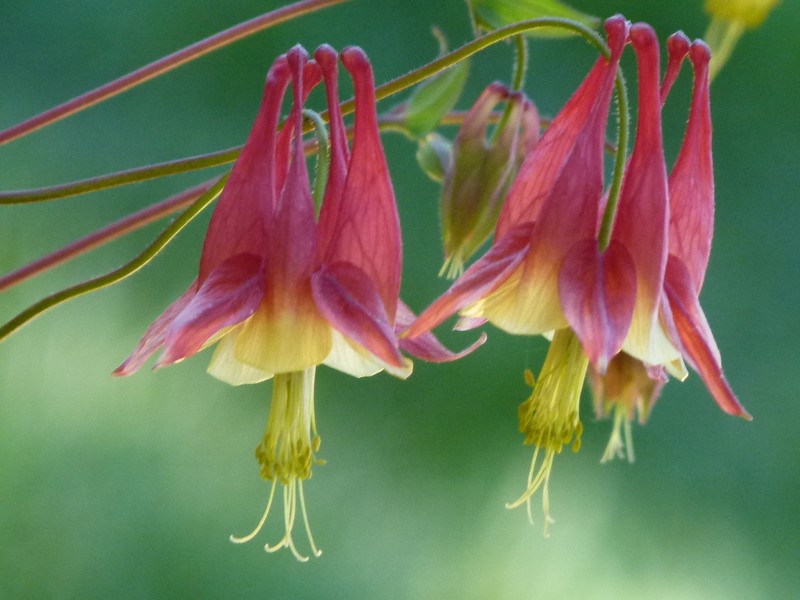 Nectar-feeding visitors and bees visiting for the pollen are the agents of cross- pollination. The flower is adapted to prevent self-pollination. The stamens mature first, starting from the outside ring and moving toward the center, shedding all their pollen before the styles emerge at the mouth of the flower and spread their feathery stigmas to receive pollen. Even if the male and female phases overlap briefly, pollen cannot fall upward from the longer stamens onto the shorter styles in the hanging flowers.

Wild columbine is an old-fashioned garden plant, cultivated in Europe and America since the mid-1600s. It’s easy to grow from seeds or from divisions of rootstocks in the spring. It prefers a moist, well drained, slightly acid, sandy loam with organic matter but will grow in a wide range of soils, including clays, especially if they drain well and have organic matter added. It does best in light shade but will tolerate full sun if daytime temperatures are not too hot. Sow seeds from spring to early summer or in flats during winter for transplanting outdoors in spring. Newly ripened seeds will germinate without treatment if sown outdoors in seedbeds or flats. Nursery stock should be set out in the spring or in the fall when dormant. Seedlings do not flower the first season.

With its dainty leaves and floral bells, it is the perfect complement to a creviced wall or rock garden, a must in the hummingbird garden, and a graceful highlight to a perennial border, where its airy, understated elegance contrasts starkly with the loud, robust beauty of the garden columbine, A. vulgaris.

Although in nature individual plants may persist for years, under garden conditions individuals may last only a few years. Wild columbine readily seeds itself, however, and new plants spread rapidly in the garden. Several cultivars are available in the nursery trade.

Native Americans used infusions from different parts of the plant for a variety of ailments from heart trouble to fever and even as a wash for poison-ivy. When pulverized, the seeds, a commodity of intertribal commerce, were rubbed on the hands by men as a love charm and also used in some tribes as a man’s perfume.

The chief threats to wild columbine, which is still common and not in imminent danger of extirpation in Virginia, are habitat destruction and collecting in the wild. For the wildflower gardening enthusiast or dealer, it is a charmer and a temptation whenever it is found, and some of its favorite habitats are the unprepossessing waysides so little cherished and often destroyed.

Its native range is from Quebec to Saskatchewan south to Florida and Texas.

Wild columbine is a plant of wooded or open, rocky or sandy ground, dry slopes, exposed rock ledges and crevices, and even peat bogs. Typically blooming in April and May or, at higher elevations, in June, it may continue to produce flowers well into July. It occurs throughout Virginia, with the exception of the Eastern Shore and several southern counties (see Atlas of the Virginia Flora, III, 1992).

Gardeners should be sure that wild columbine and other native plants purchased for home gardens are nursery-propagated plants, not wild-collected.