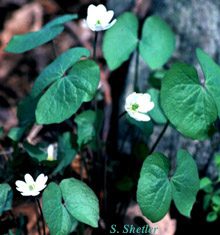 Jeffersonia honors Thomas Jefferson for his knowledge of natural history. Linnaeus, who first named this plant, called it Podophyllum diphyllum, thus making it a sister species of the mayapple. He did this on the basis of plants collected in Virginia. Forty years later, American botanist Benjamin Smith Barton saw the twinleaf growing in the garden of fellow Pennsylvania botanist/gardener William Bartram. He recognized its distinctiveness and renamed the plant Jeffersonia diphylla, the diphylla for the two-parted leaf that superficially appears to be two leaves. Jefferson, Virginia’s already famous statesman, was at the time George Washington’s Secretary of State and would soon become the nation’s third president.

Twinleaf, Jeffersonia diphylla to botanists, is among the earliest of the ephemeral floral gems that dot the forest floor in spring. It is a little plant with anemone-like, fleeting, white flowers and distinctive, deeply two-parted leaves. Superficially resembling bloodroot, which blooms about the same time, it is less showy and brilliantly white, though more stately. Twinleaf surely is one of Virginia’s woodland aristocrats and true heritage wildflowers.

Jeffersonia belongs to the barberry family, Berberidaceae, which, with 15 genera and about 650 species, is widespread in the north temperate zone. Of these, 8 genera and 33 species are indigenous to the continental United States and Canada, including such well known plants as blue cohosh, mayapple, Oregon-grape, and umbrella-leaf. The species of this family are perennial herbs or shrubs. Species of Berberis (barberries, Oregon-grapes [Mahonia]), Epimedium, Nandina, and Podophyllum are commonly cultivated. Twinleaf, found only in eastern North America, is one of only two species of Jeffersonia in the world. The other one, J. dubia, occurs only in Manchuria.

Two other genera of the family, as well as genera of other plant families, display this type of disjunct, eastern American-eastern Asian pattern of distribution, which has long intrigued botanists. Twinleaf is a dainty but hardy perennial with a knobby, yellowish-brown, horizontal rhizome (rootstock) and moplike fibrous roots; several, erect, long-stemmed leaves; and one, long, leafless flower stalk topped by a single white bloom. Both the leaf and flower stalks attach to the base of the plant. The plant is 6-8 inches high at flowering time but reaches up to 18 inches as the pear-shaped capsule with a hinged, helmet-like lid matures and the stalk elongates in early summer.

The unique leaf blade, like a butterfly with wings spread, is so deeply parted lengthwise into angular, oval halves as to suggest two blades. These leaflets are 4-6 inches long, 1-2 inches wide, smooth, bluish-green above, and whitened beneath. The delicate white flowers are about an inch across and usually have eight narrowly elliptical petals and four shorter, petal-like sepals that soon fall. There are eight stamens and one pistil that ripens into a leathery, capsule-like fruit with many seeds. The flowering time passes so quickly that only the most vigilant observers catch this early wildflower in bloom. The capsule lid pops up once the seeds are ripe.

The seeds, having jagged, fleshy outgrowths called elaiosomes, are adapted for attracting ants and facilitating ant dispersal. Ants carry the seeds back to their nests to feed their larvae the oil-rich elaiosomes, leaving the seeds proper unaffected and ready to germinate in the warm, moist soil of the nests. In this manner, they spread twinleaf through the woodland gradually over time.

The plants also spread vegetatively, forming clones by means of the underground rhizomes.

Jeffersonia is ideal for a lightly shaded rock or deciduous woodland garden of native wildflowers in Zones 4-8. It is a delight in large clumps and will spread naturally by rhizome or seed once established. Its ephemeral white flowers, among the first to brighten the garden in spring, and its interesting leaves and capsules, which persist well into summer, not to mention its heritage especially for Virginians, always stimulate conversation. The long-stemmed, pip-elike pods are a novelty to most in show-and-tells among gardeners.

The plant is relatively easy to grow in moist, sandy garden soil liberally supplied with well decayed organic matter (leaf mold, peat moss, other) and perhaps some lime. In nature, it thrives under a range of pH conditions (4.5-7) but seems to prefer calcareous soil. Yet pioneer wildflower gardening authorities Clarence and Eleanor Birdseye found that it did best in their garden in acidic (pH ca. 4.5), humus-rich soil. Other authorities recommend a neutral soil. Cover with leaves in winter.

Propagation is best done by dividing rhizomes in the fall or early spring. Sowing freshly ripened seeds in the fall in a cold frame or cool greenhouse may or may not work. The elaiosomes should be removed to prevent ants from carrying off the seeds. New seedlings should be set out, well spaced, in early spring or fall. Allow at least three years from seed to flower. The plant is relatively pest- and disease-free. It can also be grown in pots in a cool greenhouse.

The rhizome, harvested in the fall, has been used medicinally to treat various ailments including rheumatism, as suggested by one of its vernacular names, rheumatism-root. Native Americans, according to author D. E. Moerman, used this plant to treat a range of ailments, from dropsy to urinary problems and diarrhea, and applied it as a poultice for sores and ulcers.

The chief threats to twinleaf, which is still widespread, locally common, and not in imminent danger of extirpation in Virginia, are habitat destruction and collecting in the wild. For the wildflower gardening enthusiast or dealer, it is a novelty and a temptation whenever it is found.

It is native from western New York and southern Ontario to Minnesota and south to Alabama and Georgia.

Twinleaf grows in moist, deciduous woods or on partially exposed rocky slopes and outcrops, typically on calcareous substrates at relatively low elevations.In Virginia, it is indigenous over much of the western two-thirds of the state, but absent from the coastal plain. It flowers in late March and early April in Virginia southward and late April to early May in the more northern parts of its range (seeAtlas of the Virginia Flora, III, 1992).

Gardeners should not collect twinleaf in the wild and should be certain that twinleaf and other native plants purchased for home gardens are nursery-propagated, not wild-collected.

Text slightly expanded from 1999 Virginia Wildflower of the Year brochure edited for the Web by Stanwyn G. Shetler, March 5, 1999