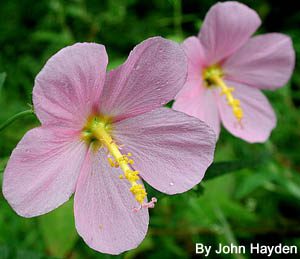 Seashore mallow lights up the salt and brackish marshes of the Atlantic and Chesapeake Bay shores of Virginia in summer with its rosy pink parade of 2-3-inch blooms from July to September or even October. It is one of the commonest of the wildflowers that decorate the otherwise relentless summer green of grasses, rushes, and sedges across the vast expanses of marsh. Identifiable even from a speeding car, it cannot be missed in season and brightens the way of all who dare to slog through the muck of the marshes. So attractive and characteristic of the native coastal flora is the seashore mallow that it was selected by the South Hampton Roads chapter of VNPS as their floral logo.

Kosteletzkya virginica (“Virginian”) was first described by Linnaeus in 1753 as a species ofHibiscus, but in 1835 the Czech physician-botanist Carl Presl transferred it to the new genus Kosteletzkya, named for the Bohemian medical botanist Vincenz Franz Kosteletzky (1801-1887). Other vernacular names used for the seashore mallow are seaside mallow, marsh mallow, pink mallow, salt-marsh mallow, and Virginia salt-marsh mallow. Marsh mallow, marsh-mallow, and marshmallow–it’s all the same name, as with salt marsh, salt-marsh, and saltmarsh, usage depending on author, editor, or context. 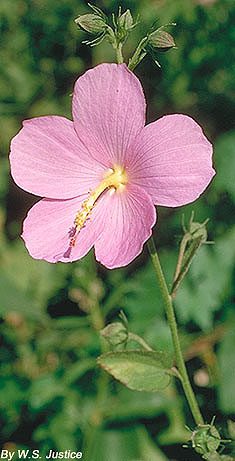 The seashore mallow belongs to the cotton family, Malvaceae, a cosmopolitan family of about 80 genera and over 1000 species concentrated in the American tropics and absent only from the world’s coldest regions. It includes herbs, shrubs, and trees. Hibiscus, with about 300 species, is the largest genus, which includes ornamentals and the famous gumbo vegetable, okra – the young fruit ofH. esculentus. The European marsh mallow,Althaea officinalis, has a mucilaginous root that was the original source of the paste used to make the namesake confection “marshmallow.” Apart from food plants and many popular garden flowers, by far the most important contribution of the family is cotton (Gossypium).

A wildflower of southeastern Virginia, seashore mallow is found in the Atlantic coastal and tidewater counties of the state, up the Potomac as far as Prince William County.(see plot of county distribution in Atlas of the Virginia Flora, III, 1992). It blooms mainly from July to September.