Wildflower of the Year 1997

The literal translation of the generic name, Chionanthus, which is latinized Greek, is snow flower, a reference to the graceful appearance of the snow-white flowers. The specific name, virginicus, means “of Virginia.”

The ethereal spring bloom of the fringe-tree qualifies this plant as one of North America’s most beautiful small flowering trees. Fringe-tree’s showy bloom delights any who visit this plant’s native habitats along streams, small rivers, and in drier sites at higher elevations throughout Virginia. Its unique natural beauty, long-standing use in horticultural settings, widespread distribution throughout the Commonwealth, and distinctive biology have earned the fringe-tree recognition as the Wildflower of the Year for 1997.

The genus Chionanthus is a member of the Olive Family, the Oleaceae, consisting of 29 genera and about 600 species of trees and shrubs, which are most common in southeastern Asia and Australasia. Economically important members of this genus include the edible olive, ashes used for lumber, and ornamental plants, including forsythia, gardenia, and privets. North American relatives of Chionanthus virginicus include the many ashes in the genus Fraxinus, the less well known devilwood, Osmanthus americanus, and four species of Forestiera, some of which bear the common name privet. The privets grown in gardens are members of the genus Ligustrum, none of which is native to North America.

There are only two species of fringe-tree: Chionanthus virginicus, found in eastern North America, and Chionanthus retusus, native to China. This unusual biogeographic pattern, with different species within a genus found only in eastern North America and eastern Asia and separated by several thousand miles, is a product of major geologic events including mountain building and the effects of glaciation. Familiar plants exhibiting this pattern include tulip-poplar (Liriodendron) tupelo or sour gum (Nyssa) and the witch-hazels (Hamamelis).

Fringe-tree grows as a large shrub or small tree from 10 to 18 feet and occasionally to 35. The plant is open in habit with the spread often exceeding its height. The trunk, which can reach 8- 10 inches in diameter, is short, with branches forming close to the ground. The bark is gray to light brown and smooth on new branches but becomes narrowly ridged at maturity. 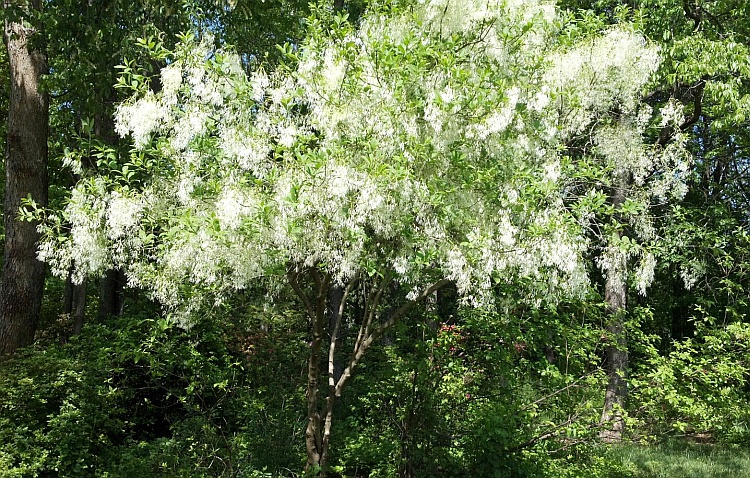 The young branches and branchlets are stout and often thickened between the nodes. Ranging from green to buff to brown and being smooth or hairy, the slightly squarish stems produce a thin outer layer that can peel, sometimes giving them an onion-skin effect. The stems are marked by semicircular leaf scars and dark pores called lenticels that allow carbon dioxide and oxygen exchange between the plant and the environment. The buds are oval and possess three pairs of sharp-pointed, keeled scales. The buds and leaves are opposite one another on the stem.

The leaves are dark green on the upper surface and paler and somewhat hairy beneath, particularly along the veins. The leaves measure 4-8 inches in length and generally are uniform in their width of 1-4 inches, while the tips of the leaves are pointed to long-pointed. The margins are entire, meaning without teeth, and are often wavy. In fall, the leaves turn a yellowish color, but fall color can vary from plant to plant and can range from greenish to brown to a good yellow.

The plant’s crowning feature is its abundant production of 4-8-inch-long clusters of delicate flowers in spring, contemporaneous with early leaf production. In northern Virginia, plants reliably flower near Mother’s Day. The flowers are white, fringe-like and effectively dioecious, meaning that they are either staminate (male, pollen-bearing) or pistillate (female, capable of setting seeds). The individual flowers consist of a minute calyx and a long-lobed corolla of 0.6-1.2-inch-long petals and a single pistil, in “female” flowers, or two stamens, in “male” flowers. Reportedly, plants bearing male flowers are more ornamental in spring than those with female flowers, due to the larger size of the male compared with the female flowers. Occasionally, both male and female flowers are found on the same tree.

The fruits ripen in late summer or early fall. The dark blue to nearly black, egg-shaped fruits are marked by a white, powdery bloom and contain a single seed. The fruits are 0.6 to 1 inch long and are borne in clusters that may be hidden by leaves. The fruits are attractive to a variety of wildlife, including many songbirds, white-tailed deer, quail, and turkeys. Male plants must be in the vicinity of females to allow abundant fruit set.

Introduced into cultivation in 1736, fringe-tree is considered by many horticulturists to be one of the finest North American specimen trees, but it also functions well when planted in groups. Primarily enjoyed for its abundant spring bloom, it is also desired for its fall display of fruit and value in attracting wildlife.

Propagation of Chionanthus virginicus from seeds requires patience since they possess a double dormancy. A warm period of 3-5 months at room temperature allows production of a root unit, while the shoot remains dormant; a cold treatment of 41 degrees F for one or more months overcomes shoot dormancy. If seeds are sown outdoors in fall, germination takes place in the second spring.

The lack of available cultivars can be attributed to the difficulty in propagating this plant from cuttings. This difficulty in asexual propagation may be attributed to the plants early loss of juvenility. Plant sex can only be determined after flowering, which may happen within as few as three years in cultivated plants. Cultivars based on plant sex or other important ornamental features are not available.

Fringe-tree can grow in a variety of environments both in and out of its natural range and reportedly performs well in USDA zones 3-9. It prefers a sunny location and deep acid soils but can tolerate a range of soil conditions. It should be transplanted balled and burlapped. While it has a reputation among some growers for being difficult to transplant, others maintain that it can be planted without problems. Plants need little pruning once established, and they are remarkably free from pests and diseases.

Traditionally, a tonic was produced from the bark, and it was used as a diuretic and to reduce fevers. While the wood is hard, close-grained, and moderately heavy, it was never used commercially.

Its native range is from New Jersey south to Florida and west to Missouri, Oklahoma, and Texas.

Fringe-tree grows commonly along stream drainages, near swamps, and in drier upland woods in sandy to deep rich soils in most counties in Virginia (see Atlas of the Virginia Flora, 1992).

Gardeners should be sure that fringe-tree and other native plants purchased for home gardens are nursery-propagated plants, not wild-collected.

Text from 1997 Virginia Wildflower of the Year brochure