The showy white flowers of Flowering Dogwood grace our yards and our woodlands!

The flowering dogwood is a small understory forest tree attaining heights of 5–15 m. Bark of older trees forms a checkered pattern. Twigs are smooth and range from green to purplish-red. Leaves are opposite, mostly ovate to wide-elliptic, and 6–13 cm long; bases may be rounded or tapered, if the latter, often unequally so; apices are acute to acuminate; vein pattern is pinnate with 4–6 secondary veins on each side of the midvein; secondary veins approaching the leaf margin curve toward the apex; upper and lower leaf surfaces range from glabrous to finely pubescent. Inflorescence is a tight, sessile, cluster of 10–20 flowers borne on stem tip; inflorescence buds form late in the season and overwinter as distinct turnip-shaped structures covered by two pairs of bud scales. Shortly before flowering, winter bud scales undergo intercalary growth, enlarging to form four white (sometimes pink) bracts that subtend the flower clusters; bract veins converge at a small apical necrotic spot representing the overwintered portion of the bract. Flowers appear before the leaves in early spring and are perfect (bisexual). There are four scalelike sepals and four greenish-yellow, short, straplike petals; four stamens alternate with the petals; ovary is inferior, capped with a nectar-bearing disk and a short style with a capitate stigma. Fruits are short-cylindrical red drupes, 8–18 mm long, bearing remnants of sepals apically; rarely, yellow fruits can be found. 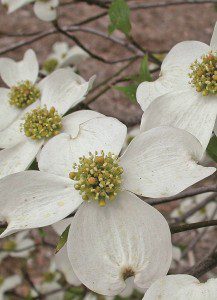 Without doubt, the most widespread current use of flowering dogwood is in ornamental horticulture. In the past, Cornus florida was used to produce ink and scarlet dye. The hard, dense wood has been used for golf-club heads, mallets, tool handles, and butcher’s blocks. Leaf, bark, and root contain tannins, the astringent properties of which once served medicinal purposes, including use as a substitute for quinine in the treatment of malaria. VNPS makes no recommendation concerning medicinal use of flowering dogwood. Small twigs can be frayed at the end and used as a tooth stick, or natural toothbrush.

Flowering dogwood from Virginia had been cultivated in Europe since the early 1700s, so it was well known to Carolus Linnaeus when he established its scientific binomial, Cornus florida, in his seminal Species Plantarum, published in 1753. The genus name is derived from cornu, Latin for horn, in reference to the hardness of the wood; florida refers to the prominent flower clusters. The common name dogwood is a modern derivative of dagwood, a name applied to European species of the genus referencing its hard wood used in making daggers, arrows, and skewers. The plant is also known as American dogwood, but numerous other species of Cornus are, of course, found in North America. The genus Cornus, interpreted broadly, consists of about 60 species, found mainly in the north-temperate zone. 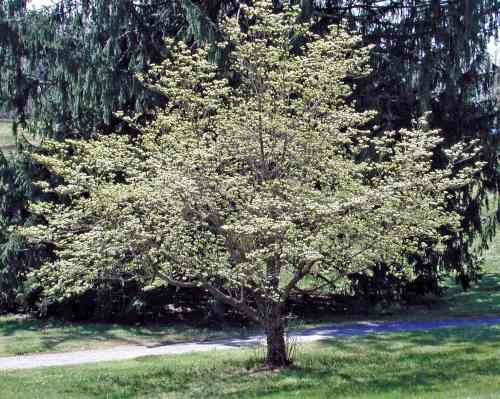 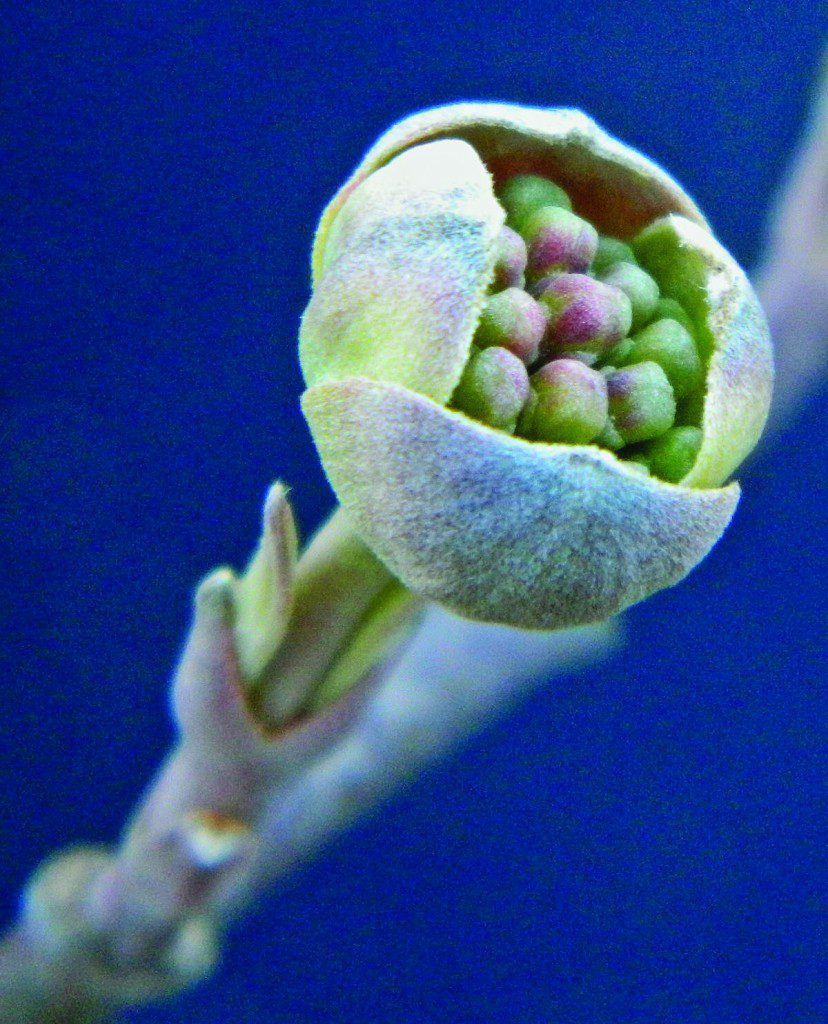 Cornus florida is a prominent subcanopy element in a variety of eastern forests. It can be found in association with species of oak, Black Gum, Sweetgum, Tulip-tree, and Red Maple, as well as diverse species of pines and Canada Hemlock. Associated understory species include Redbud and Shadbush or Serviceberry (Amelanchier spp.). Flowers are visited by a variety of bees, beetles, and flies. Fruits are consumed by many species of birds and small mammals. 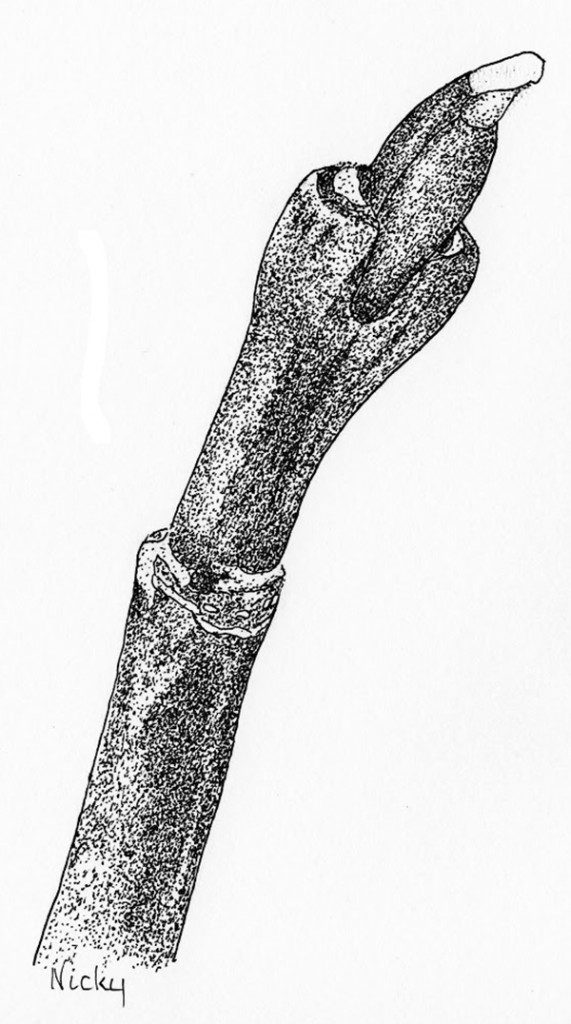 Flowering dogwood is a popular ornamental tree; its moderate size makes it adaptable for yards, parks, and roadsides, where the plants provide attractive spring flowers and brilliant fall color. The trees thrive in rich mesic soils but also tolerate drier, less fertile sites; their shallow root systems, however, make them susceptible to leaf scorch during long droughts. Flowering dogwood can be propagated by seed. As soon as fruits are mature, pulp should be removed before sowing in a protected outdoor spot; seeds handled this way will germinate the following spring. Artificial cold stratification for three to four months will also stimulate germination. Tip cuttings taken any time between flowering and the onset of summer heat root readily. Flowering dogwood also responds well to layering and grafting. Numerous cultivars exist, most featuring variations in color, shape, or number of floral bracts, color of fruit, or degree of resistance to dogwood blight. 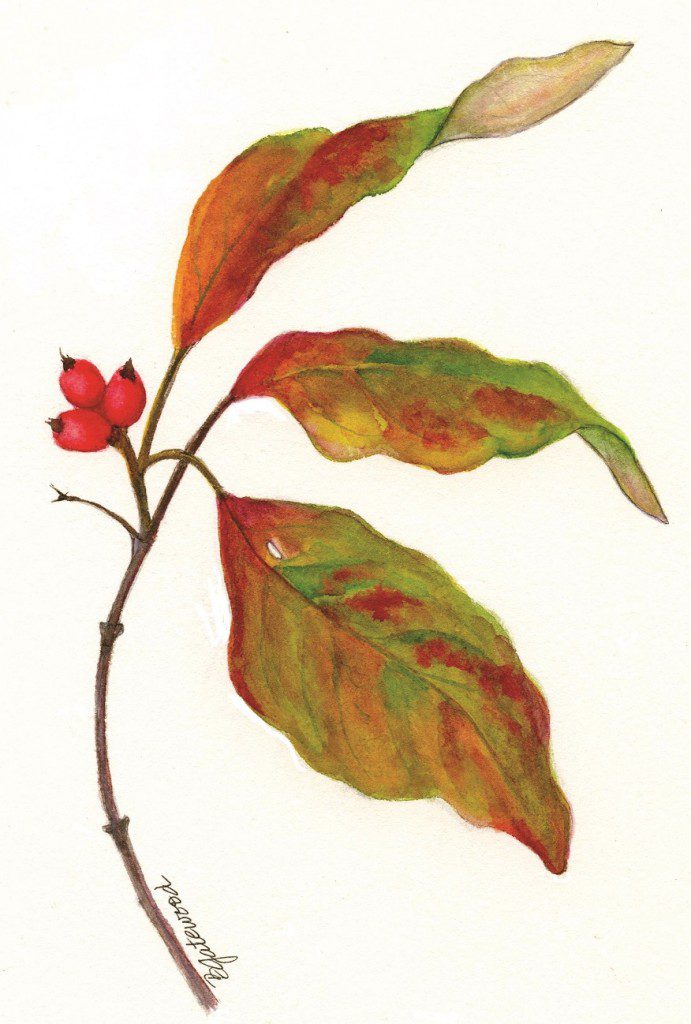 Flowering dogwood is common throughout much of its range. But in states at the northern fringe of its range it is recognized as a species of conservation concern. Imported Dogwood Blight (Discula destructiva) in extreme cases can be lethal; the long-term negative impact of this invasive disease-causing fungus on flowering dogwood in the wild and in cultivation remains to be seen.

Cornus florida can be found throughout Virginia. It is widespread in eastern North America, from southern New England to southern Michigan, eastern Oklahoma and Texas, and the northern half of Florida. 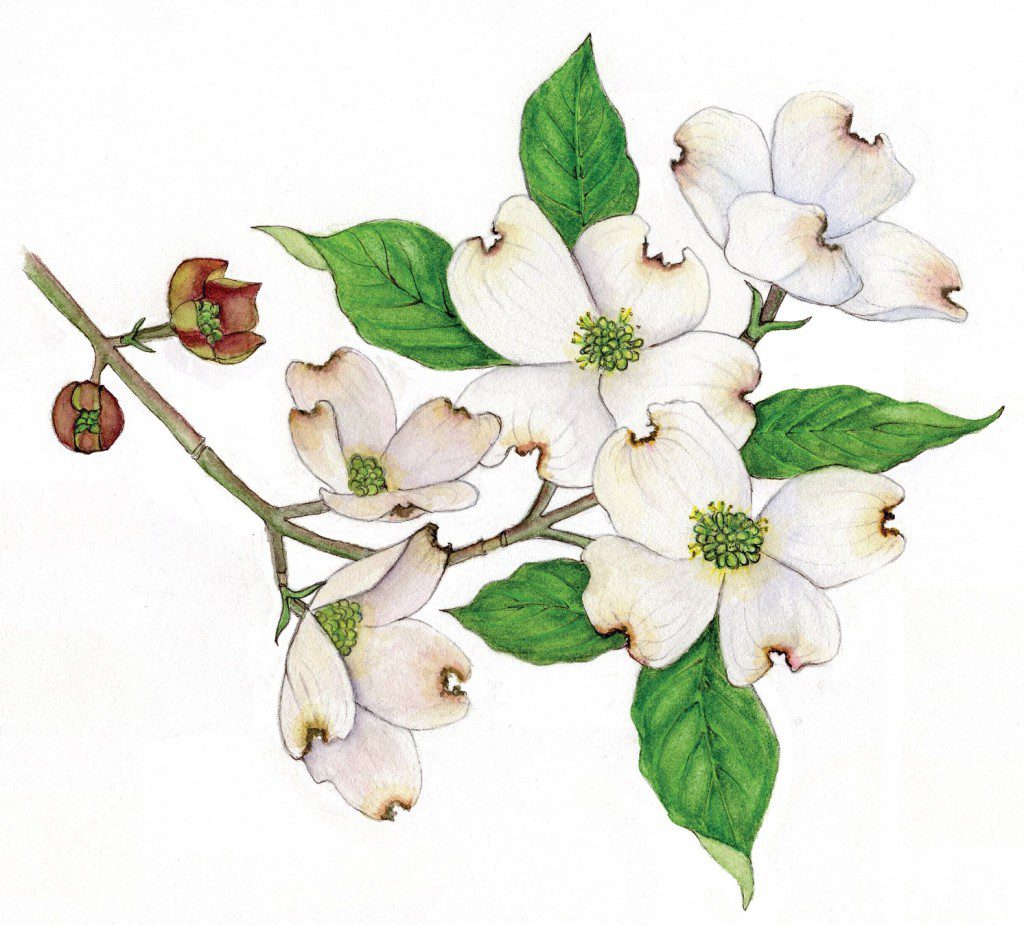 Gardeners should not collect flowering dogwood in the wild and should be certain that all native plants purchased for home gardens have been nursery-propagated, not wild-collected.

To see and learn more about interesting species of plants native to Virginia, visit www.vnps.org and contact your chapter of VNPS (details on the website) for times and dates of programs and wildflower walks in your area.