Wildflower of the Year 1994 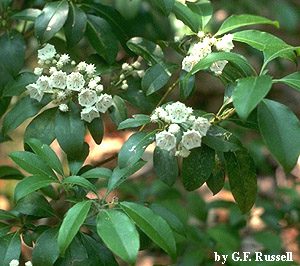 Kalmia was named for Peter Kalm, a Finnish botanist and student of Linnaeus sent by him to the New World to collect plants. Kalm was the first to study the genus, and the teacher named it for his student. The specific name, latifolia, means “wide leaf,” a character that differentiates this from five other species of Kalmia, all residents of the New World.

An evergreen shrub with a dense rounded crown and crooked branches, mountain-laurel is a member of the Heath family (Ericaceae). The dark brown bark tinged with red becomes flaky in long strips on the older stems, but is smooth on newer wood. New growth, both twigs and leaves, is usually fuzzy. The mature leaves are alternate (rarely in threes), leathery, oblong, about 3 to 4 inches long, with smooth margins tapering to both tip and short petiole. The upper surface is dark green and very glossy with a yellow midrib, while the lower surface is a lighter yellow-green.

L. kalmia The name “Calico-bush” comes from the pink-trimmed waxy white blossoms. The flowers are borne on one-inch pedicels and produced in terminal clusters or corymbs four to six inches across. The buds are conical, fluted and deeper pink. When the campanulate flowers open, the corollas appear as five-sided, white, inverted parasols about an inch across with pink dots and a wavy pink line in the center. The ten stamens in each flower have anthers buried in individual “pockets” in the corolla completing the illusion of parasols with dainty ribs.

Mark Catesby discovered mountain-laurel during his travels in the Carolinas and Virginia and introduced it to Europe in 1726. It was Kalm who discovered the poisonous properties of the foliage when some sheep belonging to the expedition in which he travelled almost died after browsing the leaves, hence the name “lambkill.” Horses are susceptible, but deer seem not to be so seriously affected. However, deer do not appear to prefer it, browsing this only when little else is available. Honey made from mountain-laurel is also believed to be poisonous.

To find mountain-laurel in the wild, watch for the distinctive shiny evergreen foliage under hardwoods on the coastal plain, along the rivers in cool, acid but well-drained areas, especially along the Blue Ridge or westward. Along openings created by trails and roads and in the interstate medians, these plants often form a glossy green wall at the edge of the forest. Usually six to ten feet high, these handsome shrubs may reach 20-30 feet in height and form tangled patches so dense that they are difficult to walk or even crawl through. That characteristic plus the shiny smooth appearance of large patches earned them the names “laurel hell” and “laurel slick” from early settlers. Where lumbering operations or fires removed the canopy trees, the mountain-laurel often forms almost pure stands. In bloom, the “laurel slicks” of the highlands become “pink beds.”

The plants tolerate a range of soils from sandy areas to shallow, rocky, mountain soil, and can tolerate generally dry sites. On richer sites, the plants will be more robust and taller. Where winter wind and ice effects are severe, plants may be shorter with many multi-branched stems. Picking the flowers for bouquets will not work well unless the stems can be placed in water immediately. Branches are sometimes cut to use as Christmas decorations, though this practice is discouraged in the wild. Finding dry capsules in the winter, split like orange sections, is fun for children. Watching for bees to trigger the stamens or trying to produce this effect is amusing, also. Small seed-eating birds perch precariously on small stems and retrieve seeds. In winter bouquets, branches with dry capsules may provide both textural contrast and color.

Mountain-laurel is a superb landscape plant with year-round interest. Propagation difficulties have kept this wonderful native shrub out of our gardens, but that is changing as a result of recent breeding programs at universities and nurseries. Nurseries are beginning to carry cultivars such as “Sara,” with dark pink flowers, and “Bullseye,” with deep purple buds opening to white flowers with a cinnamon purple band. Washington Evergreen Nursery (P.O. Box 388, Leicester, NC 28748, catalog for small charge) carries almost thirty cultivars and selections.

Like other members of the family Ericaceae, mountain-laurel needs acid soil and excellent drainage. Though it grows naturally in sites ranging from dry, rocky slopes to moist stream banks, these locations are always well-drained. Pine bark is a good soil amendment and can also be used for a mulch to keep the shallow roots slightly moist and cool. Plants will grow in shade, but flowering will be better with at least three or four hours of sun.

Under cultivation, mountain-laurel stays around six to ten feet tall and is an excellent broadleaf evergreen for both formal and naturalistic settings. Several plants can be massed to provide a dense hedge or screen. Single plants are attractive accents in shrub bonders, or it can be mixed with ferns and wildflowers in woodland gardens. Mountain-laurel is a fine low-maintenance plant for a naturalistic garden where it can grow unchecked into the picturesque form associated with plants in the wild. In formal or structured gardens, it can be kept compact with light pruning after flowering. Plants that have become tall and leggy can be severely pruned to stimulate dense new growth. Remove dead blossoms before seed forms for better flowering the following year.

Because of the poisonous properties, no part of the plant should be used for internal medicinal purposes nor should the leaves or stems be chewed. The powdered leaves mixed with lard have historically been used to treat skin rashes and infections.

Plants are not easily transplanted and should not be dug from the wild, but obtained from readily available nursery stock.

Its range extends throughout the East, from Southeastern Maine south along the coastal plain and in the mountains to Florida, Louisiana and Mississippi.

You’ll find mountain-laurel blooming in uplands throughout most of Virginia from May well into June along trails, roadsides, at the edges of fields and pas- tures, and all along power lines and railroad rights-of-way. According to the Atlas of the Virginia Flora (1992), mountain-laurel may be found in the Commonwealth in all but a few counties of the lower Piedmont.

Gardeners should be aware that wild-collected mountain-laurel is still showing up in nurseries. Plants are usually balled and burlapped with trunks that have been sawed off to stimulate new growth. Don’t buy them! Inform the nurseryman that these plants have been illegally collected and encourage him to stock nursery-propagated plants.

Text from 1994 Virginia Wildflower of the Year brochure
Catharine Tucker and Nancy Arrington, Authors
Edited for the Web by Stanwyn G. Shetler, Dec. 15, 1997