The Rosebay Rhododendron Community was the first Native Plant Site added to the VNPS Registry.

This unique ecological area at an elevation of 580-620 ft. includes a microclimate that has provided suitable growing conditions for several species of native plants that are not usually found in this part of the state. Century-old shrubs of Rhododendron maximum, rosebay rhododendron, which is usually found in the mountains, grow here along a creek. 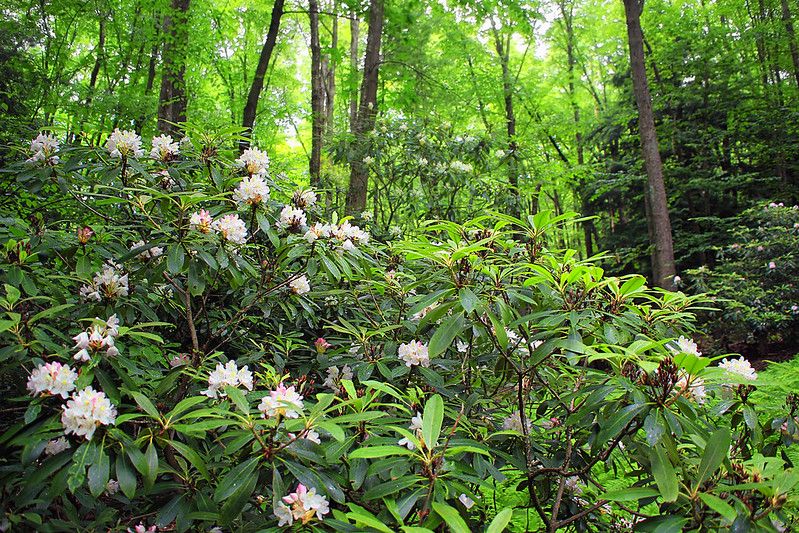 A proposed sewer line in Altavista would have destroyed much of the rhododendron site, but recognition as a VNPS Registry Site led to the choice of an alternate route.

Among the disjunct species here are Woodwardia aerolata, netted chain fern, which is common on the Coastal Plain, and Stenanthium gramineum, featherbells, which is found mostly in the Alleghenies.

From the November, 1994 edition of the VNPS Bulletin:

The Rosebay Rhododendron Site, registered by the Blue Ridge Wildflower Society, in Campbell County, was the first site to be registered in 1994. This rhododendron community occupies a ravine that extends along a creek for more than an eighth of a mile and here the microclimate bordering the stream supports several rare and interesting plants that generally occur outside the area. Here the rosebay rhododendron, Rhododendron maximum, is at its eastern-most distribution as it is normally a plant of the Blue Ridge Mountains. Among the plants of interest are a population of featherbeds, Stenanthium gramineum; the chain fern, Lorinseria areolata; the goldenrod, Solidago patula; and the gentian, Gentiana saponaria. All of these are seldom found on the Piedmont and by occurring here are disjunct from their usual geographical range. A plaque honoring Mr. and Mrs. Frank Knight, owners of this unique community, was presented in a brief ceremony on the lawn in front of their home May 24, 1994.

The Rosebay Rhododendron Community is near Altavista, south of Lynchburg.