Manassas National Battlefield Park (MNBP), the second PWWS Registry site, is administered by the National Park Service. This rich Civil War historic site of the First and Second Battles of Manassas provides a wide array of natural habitats with good plant species diversity. This Park is a multiuse Park with facilities and trails for hiking, horseback riding, and picnicking and is enjoyed by visitors from the local area as well as from around the country and abroad. The Park is 26 miles southwest of Washington, DC, and straddles VA Route 234 and US Route 29 just north of Interstate Route 66. As development of the Manassas area continues, this provides one of the last significantly sized undeveloped tracts of land in the area.

There are a number of diverse sites within the Park designated in the VNPS Registry Agreement. Three are of particular interest and readily accessible to the public: Stone Bridge, Deep Cut, and the Unfinished Railroad.

The Stone Bridge site located on the banks of Bull Run River is at its flowering peak in mid-April to mid-May before the overhead canopy of oaks and sycamores leaf out. The show of Virginia bluebells (Mertensia virginica) along the banks of Bull Run is spectacular. In addition, the troutlilies (Erythronium americanum), Dutchman’s breeches (Dicentra cucullaria), Mayapple (Podophyllum peltatum), spring beauty (Claytonia virginica), and several violet (Viola spp.) species add to the spectacular show of spring wildflowers. This site is located off Rt. 29 as one drives east from the center of the Park. 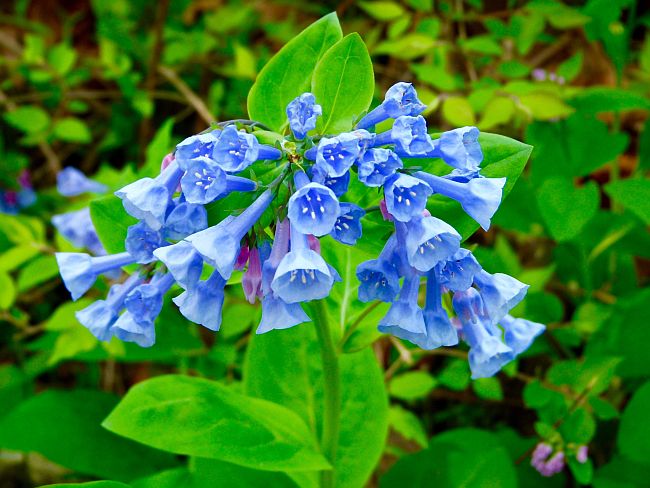 As old field/meadow sites, Deep Cut and the Unfinished Railroad show their greatest plant diversity summer into fall. These sites are located near each other on Featherbed Lane, which is reached from Rt. 29 going west towards Gainesville. They include many native species that would have been present in old fields of the area at the time of the Civil War.

Marion Lobstein and other members of PWWS as well as members of the Piedmont Chapter have surveyed Deep Cut each year since the early 1990s. They have noted changes in the composition of plant species identified over the years. The rarer milkweeds such as whorled milkweed (Asclepias verticillata) and green-flowered milkweed (A. viridiflora) have become less frequent. The ragged fringed orchid (Platanthera lacera), found in early surveys, has not been seen in over 18 years. Also rose pink (Sabatia angularis) has not been seen in many years. There is concern that alien species such as compass plant or prickly lettuce (Lactuca scariola) and grasses such as arthraxon (Arthraxon hispidus) and stilt grass (Microstegium vimineum) are becoming more invasive.

Many of these species can be found at the Unfinished Railroad site but the discovery of blue hearts (Buchnera americana) made during a fieldtrip to that site at the 1993 VNPS annual meeting, is an exciting addition to species that can be observed at the MNBP but has not been found again in recent years.

The main concern in working with MNBP staff and administrators to preserve these species diverse sites is to coordinate mowing schedules at the Deep Cut and Unfinished Railroad sites. There have been some challenges with this coordination over the years but with the renewal of the Registry agreement in 2011 with MNBP staff and a review with the new MNBP Superintendent this year, this relationship has been improved. There is concern that the introduction of additional plants of big blue stem has crowded out other native plants.

In late August 2014 Marion Lobstein led a walk for Potowmack, PWWS and Piedmont VNPS chapters. During the walk Jerri and Carl Taylor found several plants of quillwort (Isoetes appalachiana) that had not been identified in previous surveys. In addition the Potowmack Chapter’s Grass Bunch looked at grasses and added a number of species to the checklist of plants for Deep Cut, including prairie three-awn (Aristida oligantha), witch grass (Panicum capillare) and, unfortunately, Johnson grass (Sorghum halapense).

This article was adapted from the original by Marion Lobstein which appeared in the Winter 2015 edition of the Potowmack News, the newsletter of the VNPS Potowmack Chapter.