Hosting the VNPS Annual Meeting at the Frontier Culture Museum was a great choice. If you haven’t been to the museum, it consists of about twelve exhibits of typical homesteads, (houses, barns, fields, etc.), of the people who originally inhabited North America, including the American Indians and those people who immigrated to the Atlantic coast during the period of about 1700 – 1850: West Africans, Irish, English, and Germans, predominantly.

A 1700s Irish farm at the Frontier Culture Museum in Staunton. Photo used with their permission.

Friday was a beautiful early fall day, so during the afternoon board meeting which my wife attended, I visited all of the homestead plots. The ingenious and practical ways that people solved everyday problems were inspiring. People are so clever, or at least they are really good at adopting the clever inventions of their neighbors.

Not only was the Frontier Museum site amenable, the hospitality of the social hour and the quality of the food was rather remarkable. We talked to one of the chefs later, and she was so proud of how she had pounded, filled with spinach, and flash-cooked the flank steak. And it showed; all of the food was very good.

Of course the highlight was the plant walks themselves. The leaders were, as expected,  expert at plant identification, but they were also very well-versed in the big picture of the ecology of the areas we visited and took delight in telling us how the jewelweed and coverweed took over as soon as the evil autumn olive and oriental bittersweet were removed. Very hard work, by the way, and a good job they did. My only warning to newbies is to watch out for the Ailanthus, (also known as both Tree of Heaven and Stinking Sumac). When my guide had me smell a crushed leaf with the admonition that “I would never forget it!”  She was right! 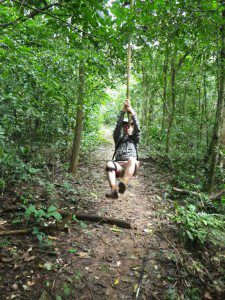 Editor’s note: Thanks, Mac, for responding to the plea for hearing more of “your” experiences! We’d love to hear from more of you – things you loved, learned, laughed at or loathed on your native plant/native garden/native program forays! Just email them to: vnpswebmaster@gmail.org
Happy Trails!