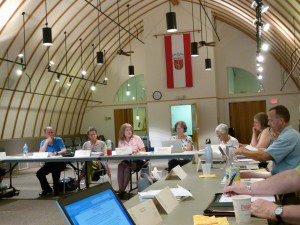 Nancy Vehrs (Pink VNPS shirt) leads quarterly in dairy barn – milked for all it was worth!

In the unusual setting of a dairy barn, VNPS President, Nancy Vehrs, opened the 2015 Annual Meeting in Staunton with the quarterly gathering of the Board. After the traditional business session, (the nuts and bolts that keep VNPS running), Rod Walker, from the Blue Ridge Partnership for Regional Invasive Species Management (PRISM) was on hand to explain in detail how that organization works.

Rod’s own journey into the understanding of invasive plants came from owning a large tract in Virginia while he lived out of state. Noticing pretty berries on the margins of his woods, he picked them to use as holiday decorations in Illinois. (Uh oh . . .) Fifteen years later, looking to move to his Virginia location, he had to bring in bulldozers to penetrate the monoculture of oriental bittersweet that had taken over his forest. PRISM is a stand-alone, cooperative agency focused on educating about and assisting with, the control of invasive plants. After hearing his presentation (more later), the Board voted to sign the General Agreement and become a contributing member of PRISM.

The Board also voted to be an active contributor to the dialog leading to introduction of legislation to change Virginia’s Noxious Weed Law. Right now no changes to the law that prohibits the sale of plants can be made for any plants currently ‘widely disseminated.’ This of course is a Catch 22 for all those plants like barberry, (Berberis thunbergii), already banned in other states but  still legal to sell here, despite their increasingly detailed negative effects, including the promotion of Lyme disease. 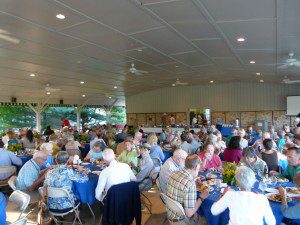 Dinner at the Annual Meeting.

A social hour and registration followed this lively meeting, and The Natural Garden was on hand to sell plants and, of course, to talk about natives. The setting for the social hour and dinner was a semi-outdoor pavillion decorated beautifully with native wildflowers. Part of the fun of these gatherings is meeting new people and re-connecting with old friends from other parts of the state.

Dinner was followed by two brief but powerful presentations. Lynn Cameron spoke about the efforts of The Friends of Shenandoah Mountain to obtain a more permanent and comprehensive protected status for a central area of the mountain that is the most truly wild. 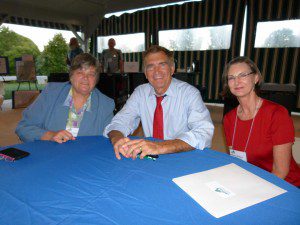 Our own Nancy Sorrells spoke passionately and with great understanding about the perils of the four pipelines that are seeking approval for crossing our state, with a focus on the biggest one, the Atlantic Coast Pipeline. Nancy reported that the National Forest Service has been active in voicing its concerns.  More later, for sure. State Senator, Emmett Hangar, came to support Nancy’s efforts.

Each one of the above items deserves it’s own blog post, but for now, field trips are calling. Will we or won’t we? The weather report is not exactly fantastic – 80% chance of rain, but we will make the most of it, whatever it is!