From the age of 9, I grew up as Marion Louise Coble in Stanley, NC from 1955 through 1968. As a child I explored the woods about my home on North Peterson Street. An intersecting street was East Poplar where I found a woody plant with very large leaves. I even pressed some of the smaller leaves of this tree for my Girl Scout “Tree” merit badge. All of us children in the neighborhood called this plant “Elephant Ears.” 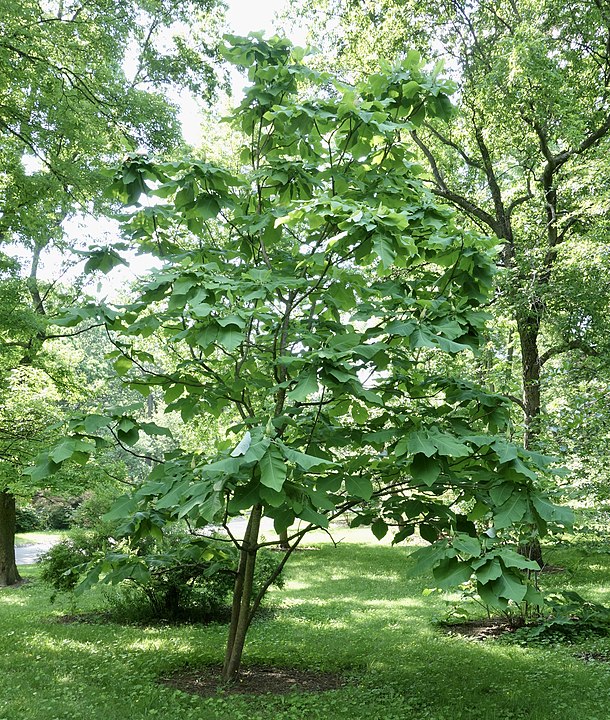 When I majored in Biology at Western Carolina University (WCU) from 1964-1968 I became increasingly interested in Botany, especially plant identification. In 1966, I participated in a Regional Flora class where I was inspired by Dr. Jim Horton, who taught this class, to continue my interest in plant identification using the Guide to the Vascular Flora of the Carolinas. After graduating from WCU in 1968, I lived in Chapel Hill, NC where I worked as a research technician at the National Institute of Environmental Health Sciences. During this time, I also earned my Masters of Art in Teaching, with a concentration in Botany, from the University of North Carolina-Chapel Hill (UNC). While at UNC, I had the opportunity to participate in Dr. Ritchie Bell’s graduate Plant Taxonomy course using his Manual of the Vascular Flora of the Carolinas.

In 1974, I moved to Northern Virginia, and began teaching at Northern Virginia Community College (NVCC) Loudoun Campus, where I set up, taught, and wrote labs. I also started a small herbarium collection for the campus. I began to ask if there were a flora for the state of Virginia, as I continued to identify plants using the Carolina flora. In 1976, I began teaching as a faculty member at the Manassas Campus of NVCC, where I taught General Biology, Plant Identification, Introductory Botany, Wetland Plant Identification, Wetland Plant Ecology, Human Anatomy and Physiology, and Microbiology.

In 1977, I became active in the Virginia Academy of Science (VAS). While participating with the Botany Section of VAS, I learned about VAS’s effort to develop a modern flora for Virginia. The Academy supported the development of the Atlas of the Virginia Flora which documented the distribution of vascular plant species in the counties of Virginia. (An atlas is often the first step in developing a guide to that type of flora, before a full flora is developed.)

Part I of the Virginia Atlas that covered Monocots was published was published in 1977. In 1981, Part II covering Dicots was published and Magnolia macrophylla (Elephant Ears) from my childhood was included as documented in Lee County, the most Southwestern county of Virginia. Unfortunately, after the publication of these two Atlas sections, efforts to develop a flora manual stalled. In 1999, I learned there was, again, another opportunity to restart the efforts to develop a flora manual. I procured a grant from the Academy to explore the steps to seek this goal. 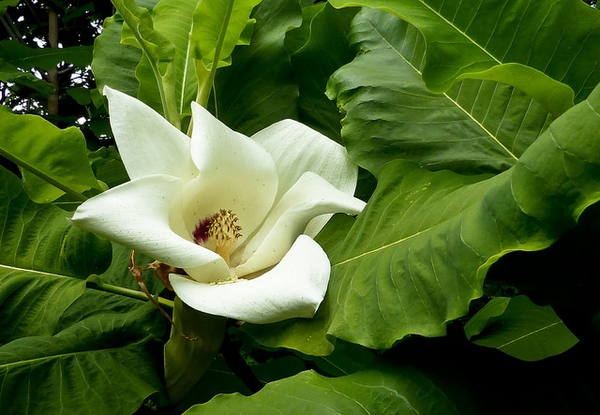 In 1999 I met with Dr. Alan Weakley, now curator of the University of North Carolina Herbarium, and he expressed support for a new flora manual for Virginia. Alan eventually became the first author of the Flora of Virginia. In 2000, I  met with Chris Ludwig, a biologist with the Virginia Natural Heritage Program, and Chris also agreed to be part of our efforts. In 2001, the Foundation of the Flora of Virginia Project (FFVP) was created, became a 501(c)(3) non-profit organization and established a Board of Directors. Chris became the Director of FFVP and the second author of the Flora; Johnny Townsend, botanist with the Virginia Division of Natural Heritage, eventually became the third author. I was an active member of the FFVP board and served as vice-president in the second and now current board. I retired from NVCC in 2011, giving me even more time to help with the Flora Project.

In 2012, the first print edition of the Flora of Virginia was published. Magnolia macrophylla (Bigleaf Magnolia), my childhood “Elephant Ears”, was now included in the Flora. In 2017, the Flora of Virginia Mobile App for iOS and Android cell was made available. This digital App has had a number of updates and will provide the ability to add new species, update taxonomy, and other information, besides being a great tool for identification of plant species. 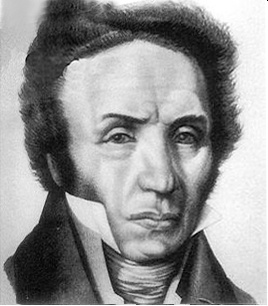 In the early 2000s, I received a copy of the book Journeys through Paradise: Pioneering Naturalists in the Southeast by Gail Fishman. As I read this fascinating account that traces the journeys of early naturalists though the Southeast, I learned André Michaux (1746-1802) had discovered Magnolia macrophylla near Stanley, NC. A man named Charlie Williams was mentioned in the same chapter — Charlie was the person who led Gail Fishman to the location of Michaux’s original discovery. Charlie Williams was a Charlotte, NC librarian who had become interested in Michaux’s discovery and the documentation of Magnolia macrophylla.

In 2005, I had the great pleasure of meeting Charlie Williams at a book signing and reception for a new edition of Wildflowers of North Carolina by Ritchie Bell and his wife Anne Lindsey. When Charlie learned I had grown up in Stanley and had known the Magnolia macrophylla as a child, he offered to meet me in Stanley sometime and show me the site of Michaux’s discovery. Later that year when I was visiting family near Stanley, Charlie met me and took me to see the site of Michaux’s discovery. I was obviously thrilled to see the site and learn more details of Michaux’s exploration from Charlie. In 2007, I took my 7 and 10 year-old nieces to see the marvelous “Elephant Ears” leaves in the woods where I had played with them growing up. This is a photo of that “introduction.” 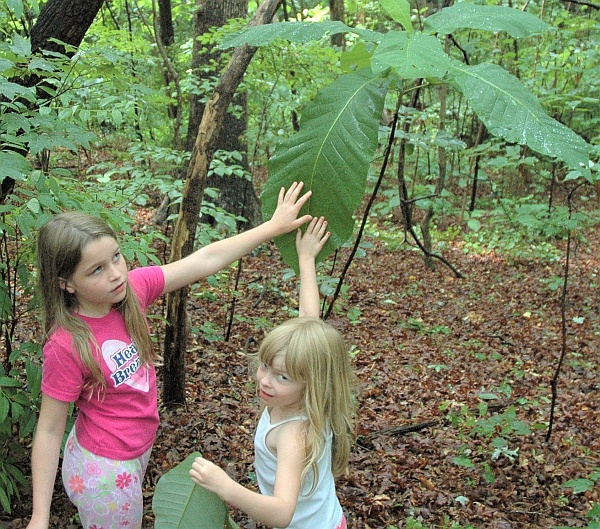 Emily Grace Coble at left and Gabby Coble at right “meeting” Magnolia macrophylla in 2007.
Photo by the author.

In late April 2020, I received an email that reminded me of meeting with Charlie Williams and taking my nieces to see the “Elephant Ears.” Less than a week later, I received an email from Charlie about the recent publication of a new book he had co-authored: André Michaux in North America: Journals and Letters, 1785-1797.  A few days later, Charlie and I talked and caught up on our respective lives — Charlie’s with his new book and my continuing involvement with the Flora of Virginia Project. 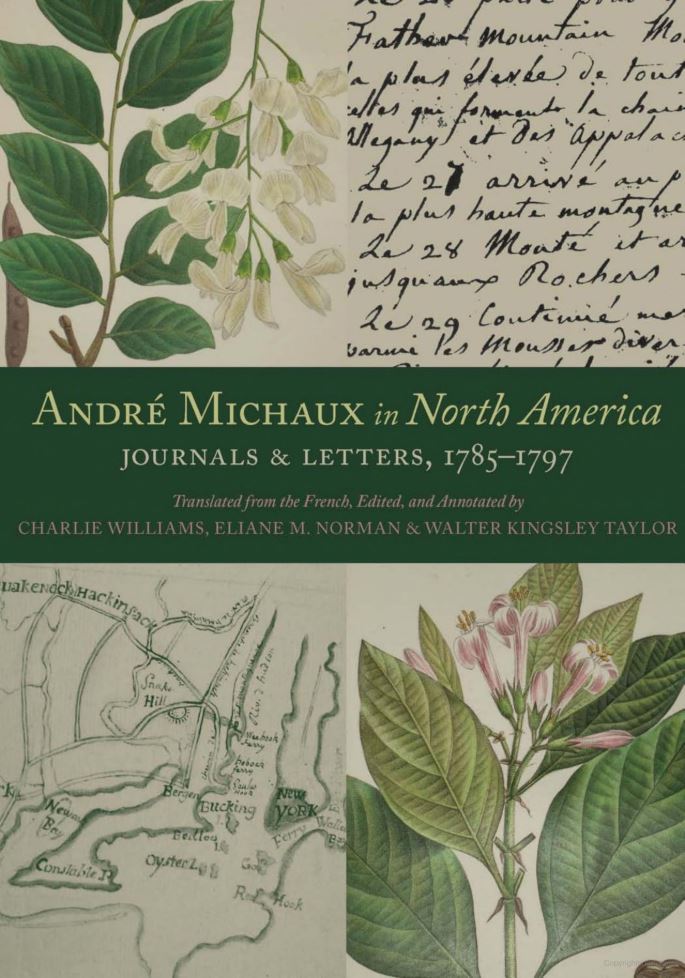 Charlie has since sent me a discount coupon below that can be used to order the new André Michaux book at a discounted price. The book can also be ordered from Amazon. If ordered before September 2020, by calling the University of Alabama warehouse at 800-621-2736 and using the coupon code WMT30, the book’s cost will be $38.00 + shipping and handling.

I have just ordered copies of this book and look forward to reading it and finding out more about the discovery of my childhood “Elephant Ears” and many other facts about André Michaux, one of the Southeast’s most important and interesting botanical explorers.

The author wishes to thank Linda Wilcox and Charlie Williams for their editing assistance.