Chris Ludwig, botanist, zoologist, and general all-arounder with the Virginia Natural Heritage Program, is off to greener pastures after 30 very busy years in the conservation community. And I do mean actual pastures right now since, as I write, Chris and his wife, Jolie, are staring out across the Serengeti as wildebeest swarm and ﬂocks of new birds come into view. For those of you who know Chris, this is exactly the sort of place you knew he would head to for his real retirement party. For those of you who don’t know him, Chris is a person whose intense interest in the natural world will always pull him toward the wild, the new, the novel, or the blank spot on the map. 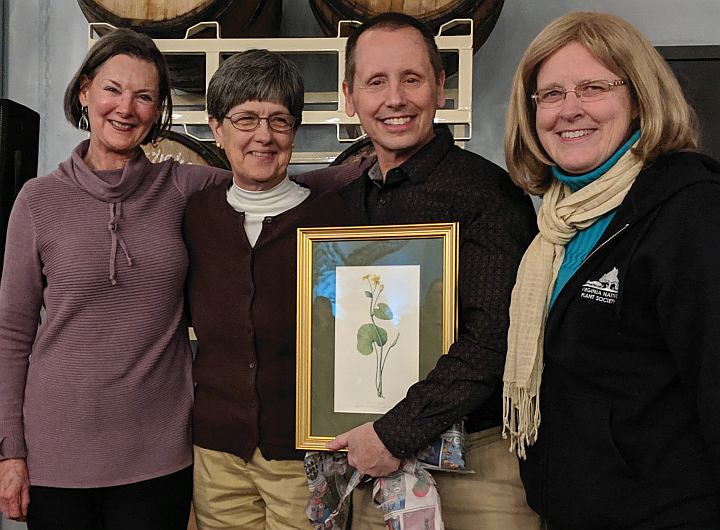 This spirit of inquiry has resulted in numerous biological discoveries through his roles with the Heritage Network, but, much more importantly to Chris and to the benefit of all of us, it has led to the conservation of thousands of acres of land in the Commonwealth. That, he has always emphatically declared, is what he is most proud of. Starting in the late 1980s, Chris led the botanical charge at the Virginia Natural Heritage Program as he combed the state for our rarest plants and the signiﬁcant habitats on which they depend. When he needed more of a challenge (!), he set about learning the moths—a complex task for an inquisitive mind.

When I arrived as botanist with Natural Heritage in 2001, I knew immediately that we shared the same kind of enthusiasm and felt the same push to discover new territory, new species, and an ever more intimate knowledge of the natural world. Chris also knew that we hadn’t even gotten around to properly documenting what was known botanically in Virginia. It was not too surprising, then, that Chris began his push toward what became the Flora of Virginia, a landmark work long sought by the Virginia botanical community and heavily supported by the Virginia Native Plant Society. I was lucky enough to be involved with Chris on this venture, one that would need his sustained efforts over more than a decade to complete. Typical of Chris, he served in numerous capacities, the role of author being just one. Organizing such a large, long-term project with so many moving parts, people, and technical challenges turned out to be just his sort of thing. But being able to enjoy the outdoors is not terribly compatible with the demands of managing a staff of biologists and wrangling money, so it is not at all surprising he temporarily ﬂed to Africa.

Here’s hoping Chris can manage to spend many more days in the ﬁeld, doing what got him here in the ﬁrst place. Please tell him congratulations when you see him!

—By Johnny Townsend, the Staff Botanist with the Virginia Department of Conservation and Recreation Division of Natural Heritage.

This article first appeared in the Spring 2019 Sempervirens, the quarterly newsletter of the Virginia Native Plant Society.