Our evergreen Wax Myrtle or Southern Bayberry (Myrica cerifera) is handsome in every season of the year but it particularly sparkles in the winter after the leaves of deciduous trees have fallen leaving a gray and brown landscape. Not only are Wax Myrtles a beautiful native evergreen (large shrub or small tree depending on how you prune it) but they are also tremendously adaptable and easy to grow. They offer a handsome fine-textured, billowy habit growing quickly to about 10 to 15’ in height but are capable of reaching 25’. All parts of the shrub are delightfully aromatic, with a strong bayberry fragrance. The narrow wedge-shaped leaves are a lustrous olive green and if you look closely, you can see they are dotted on both the upper and lower surface with yellow and brownish resin glands that yield the spicy bayberry aroma when rubbed or crushed (hmmm, that wonderful smell). In fall the females produce small round pewter-gray fruits that are densely clustered along the branches. These persist throughout the winter providing beauty for our landscapes and food for all our wintering songbirds. The berries are covered in a thick whitish waxy coating from which bayberry candles are made. 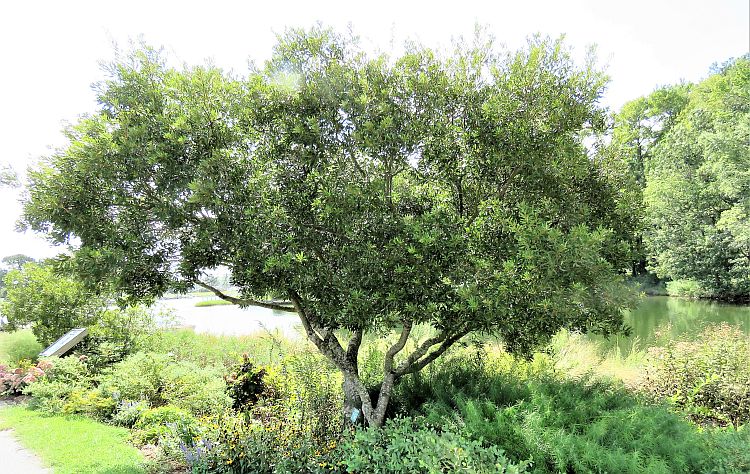 Wax Myrtles are usually dioecious meaning they have separate male and female plants; only female plants produce the fragrant fruit, but occasional populations produce both female and male flowers on the same plants, rather unusual but a useful adaptation. You will need both to insure the handsome fruit. 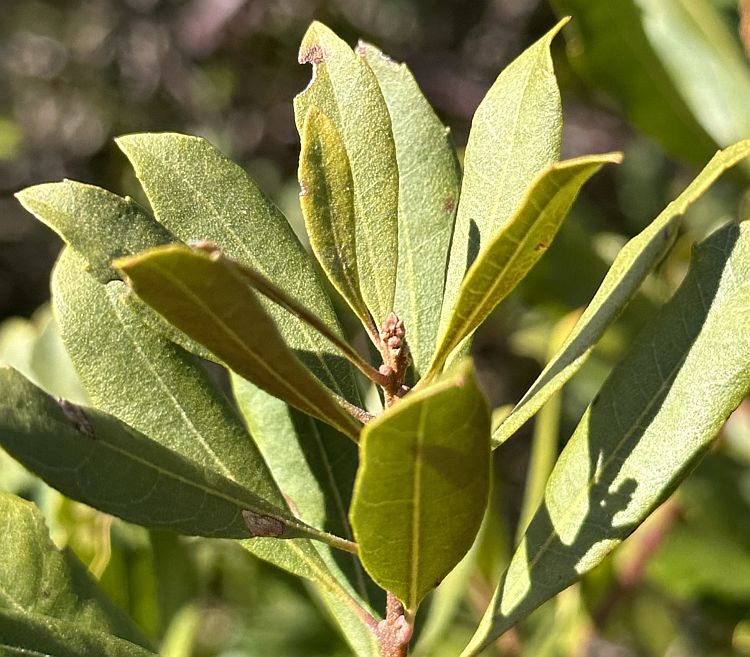 Native from southern New Jersey and Delaware south to Florida and Texas, Wax Myrtle or Southern Bayberry is a southern species, hardy only to zone 7. A closely related species, Northern Bayberry (Morella pensylvanica), occurs along the northern coastal plain from Newfoundland south to North Carolina but differs in its smaller size and its semi-evergreen to deciduous foliage. This Northern Bayberry is common along Virginia’s outer Coastal Plain on Eastern Shore and near Virginia Beach but otherwise is rare in the inner Coastal Plain where the Wax Myrtle (Southern Bayberry) is widespread. The Wax Myrtle is found in a wide variety of Coastal Plain habitats from the upper dunes and interdune swales to maritime swamps and forests to tidal marshes and swamps to successional pine-hardwood forests. 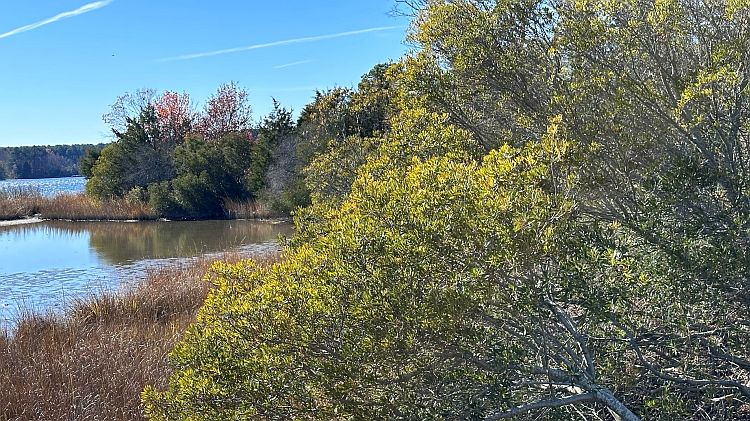 Wax Myrtles are adaptable shrubs tolerant of poor sterile soils, high winds, waterlogged soils, salt and salt spray and can grow in sun or part shade. Their roots contain nitrogen fixing bacteria producing the needed nitrogen to allow the Wax Myrtle to thrive in extremely poor, infertile soils. Tolerance of salt and salt spray makes them an excellent plant for use near the coast and Chesapeake Bay. They prefer acidic soils but will prosper in sandy, loam and even heavy clay soil. Their ability to sucker into colonies is ideal for bank or shoreline stabilization and they are quite useful in wetland restoration gardens and riparian buffer plantings. They are perfect for naturalizing but are also at home in more formal landscapes where they can be pruned into a handsome evergreen hedge as in the Herb Garden at the National Arboretum in Washington, D.C. or they can be limbed up into a handsome small evergreen tree, revealing the smooth gray, almost white bark. 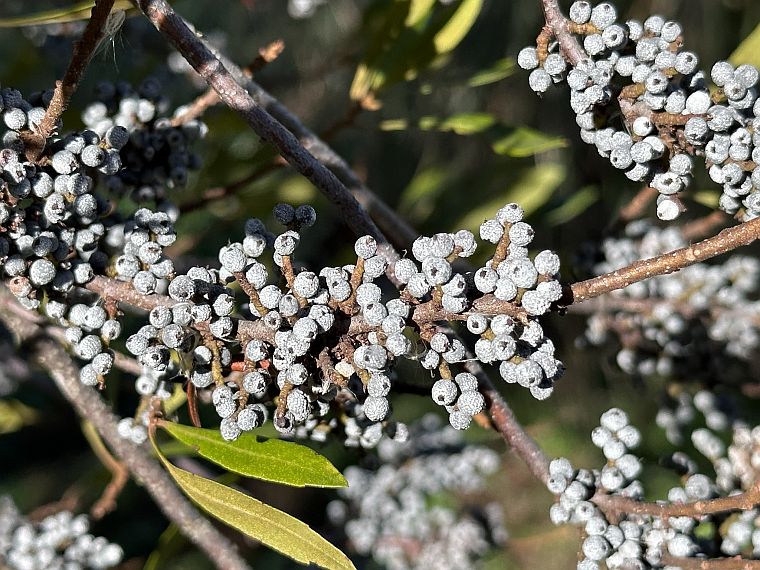 The persistent fruit of Wax Myrtles provide critical food for a variety of songbirds through the winter months. In fact, the beautiful Yellow-rumped Warblers, once named Myrtle Warbler for their affinity for this shrub, are already busy cruising the Wax Myrtles near my shoreline feeding on the fruit . Other songbirds that relish the fruit include tree swallows, bluebirds, catbirds, kingbirds, Carolina wrens, and a variety of sparrows and woodpeckers. Wax Myrtles also provide critical shelter for a variety of wildlife at other times of year as well as being a host for the Red-banded Hairstreak butterfly. 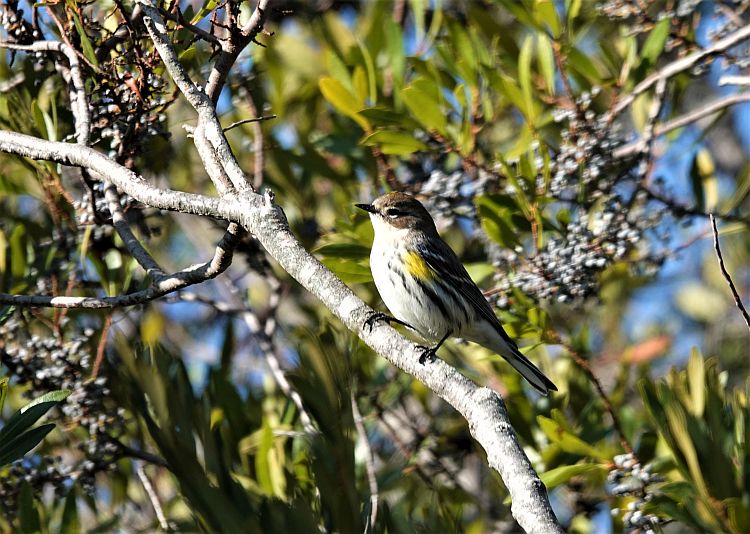 Humans have long used the fruit of this species for medicinal purposes and to make bayberry candles, soaps, and sealing wax. Colonists made delightfully fragrant bayberry candle wax from the berries by picking and boiling up to 15 pounds of berries to make just 1 pound of wax. Considering that the abundant berries are only 1/8” in diameter, that’s a lot of berry picking! Colonial folklore states that if you light a new bayberry candle on Christmas Eve, you’ll have health, wealth, and prosperity in the coming year.

Plant this aromatic and tough shrub in your garden or along your shoreline and light a bayberry candle this Christmas Eve or Winter Solstice and enjoy the wealth of life and the benefits this beautiful shrub will bring to your garden.