Driving into the Nature Conservancy’s Fraser Preserve on a warm July morning is like entering a sanctuary. The hustle and bustle of the Beltways is left behind as I head west on Georgetown Pike, watching the houses get further and further apart. A few more turns and dips and I start wondering if I’m lost. This place is really off the beaten path. Finally, a small sign at what looks like the end of the road tells me I’ve made it, and I’m relieved that I won’t be late for the morning’s activity. I drive into the forest and the road immediately gets rougher, forcing me to tear my attention away from the quiet copses and rushing streams. The number of cars parked at the entrance attests that this is a popular weekend getaway, but I’m here for a different reason. Aldo Leopold famously said

“One of the penalties of an ecological education is that one lives alone in a world of wounds.”

As a plant ecologist and professor at Towson University I can definitely relate. I’m headed to meet a group of volunteers from the Potowmack Chapter of the Virginia Native Plant Society to map one of the newest wounds to this wooded oasis, wavyleaf basketgrass (Oplismenus undulatifolius). 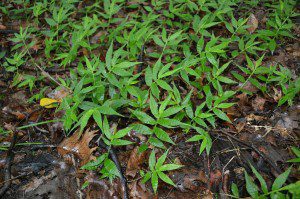 Invasive species are nothing new to this area. As defined by the USDA, an invasive species is a “non-native [species] …whose introduction causes or is likely to cause economic or environmental harm or harm to human health”, and wavyleaf basketgrass is just the newest in a parade of invasive plant species that exist in our local forests. The uninitiated see lush green vegetation and a beautiful setting for a hike. Those in the know see garlic mustard, Japanese barberry, stiltgrass, oriental bittersweet, wineberry (among others) and now wavyleaf basketgrass. 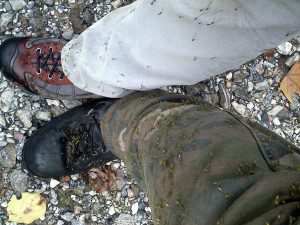 Seeds of wavyleaf basketgrass hitch a ride on just about anything

Wavyleaf basketgrass was first discovered in Maryland in 1996 in Patapsco Valley State Park, near Baltimore MD. It has since spread through Maryland and Virginia, showing many of the qualities of a successful and damaging invasive species. In some areas this shade-tolerant grass completely carpets the forest floor, leaving little room for native species. Its perennial life style enables it to emerge, year after year, through thick leaf litter; allowing it to colonize vast areas of forest inaccessible to annual invasive grasses like stiltgrass. Its insidious dispersal method of offering dozens of goo-covered seeds atop a spikey inflorescence ensures it hitches a ride on nearly anything mobile that brushes past: people, dogs and deer, definitely; small mammals and birds, probably. Also, nothing appears to eat it. Imagine the ecological consequences of large swaths of forest monopolized by an inedible understory. 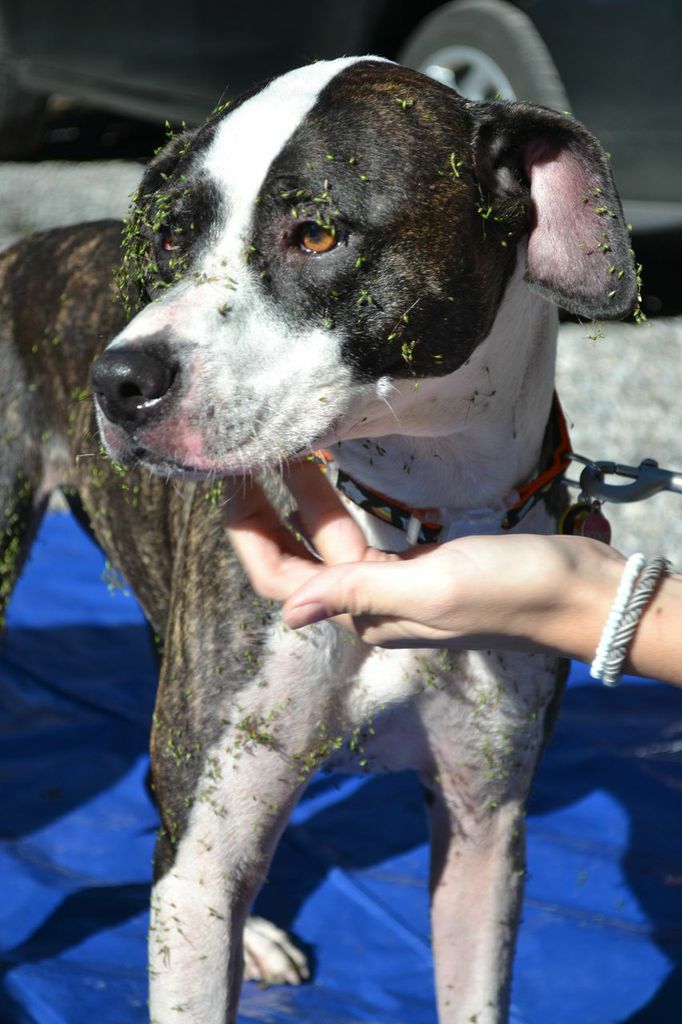 When trying to determine the potential impact of a new invasive species and raise public awareness as well as funding to study and control it, one of the most important pieces of information is also one of the hardest to gather. Just how much of it is there and how fast it is spreading? For wavyleaf basketgrass, the answer is – we have no idea. We have reports from many parks and natural areas throughout central Maryland and there have been multiple sightings along the Appalachian Trail in Virginia, including Shenandoah National Park. But my sense is that this is a vast underestimate. Which is why I’ve driven 70 miles and two Beltways to meet a crowd of people on a Saturday morning in Fraser Preserve.

The volunteers awaiting my arrival are the newest participants in Project Wavyleaf, a citizen science initiative to map wavyleaf basketgrass. The concept is simple:

The first and second steps of this process have been accomplished thanks to a grant from the School of Emerging Technologies at Towson University. With my colleagues in the Department of Computer and Information Sciences, we’ve developed a cell phone app for Android and iPhone that is freely available for download. The app allows users to submit both presence and absence points, data on infestation size and control measures taken, as well as photos and notes. The system is set up to take information at a single point (your yard or favorite picnic lunch spot) or to remind you to take a series of points was you hike your favorite trail. 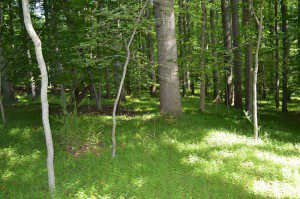 The third step of this process continues today. My group at Fraser is one of the most inquisitive I’ve presented to. We talk about the history of the invasion, the potential threats posed by this species and the goals for the project. One great question that comes from the audience is “Why this species?” The botanists in the group know that if you walked outside the room where we’re meeting and threw a rock into the forest, your chances of hitting an invasive species are much, much better than average. Not so much a pristine sanctuary but a world of wounds.

So why spend energy on wavyleaf basketgrass while there are so many others clamoring for attention? The answer is simple. In the grand scheme of things, this species hasn’t been here that long. If we can get the word out fast enough, if we can really document how much of a problem it is, and if we can figure out how much of it we’re dealing with and where, we may still be able to beat it. With vigilance we can quickly eradicate it from areas where it invades. With funding we can start to tackle it in areas where it has become established. When wavyleaf basketgrass was first found in Fraser Preserve in 2008, it had already expanded to a 20-30 acre patch. Clearly it had been here for a least a few years before, but no one was looking.

Today I’m training a group of volunteers how to look. It’s one of about a dozen training sessions I’ve held 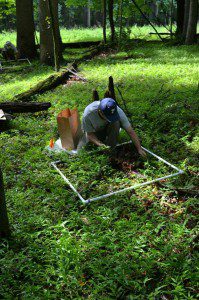 Pulling this invasive by hand is the best method of control

over the last two years since the inception of Project Wavyleaf. Each session educates more interested individuals who then spread the word to their friends and colleagues. Slowly but surely, I’m recruiting an army. After our question and answer session, I take my new platoon outside. Wavyleaf basketgrass can be killed by the herbicides Roundup and Envoy Plus, but the best way to deal with small patches interspersed with other vegetation is to pull it out by hand.

The root system is weak and the results are immensely satisfying. Some of my group spends about two hours slowly moving through the forest near the church camp ripping out patches as they go. If you’re faced with a lot of this stuff (and unfortunately Fraser is) the best course of action is to focus on removing it from high-traffic areas so unwitting explorers don’t spread it. Other volunteers break off and go for a hike, using the app to record other populations they find. Small scale mapping of reserves like Fraser, as well as large scale efforts to document this species across two states are both important.  We’re off to a good start, but we need hundreds, if not thousands more helpers. Won’t you be one of them?

Please contact me with your questions, or to help with the project!

We ran out of funding for Project Wavyleaf so we’re now collaborating with the Mid-Atlantic Early Detection Network. They have an app you can download through https://www.eddmaps.org/midatlantic/. Land managers in Maryland and Virginia are using that site as a clearinghouse for all wavyleaf location data. There is a very active group with Blue Ridge PRISM that is interested in wavyleaf basketgrass and would appreciate the addition of any new populations people find.

Photo credits to the Beauchamp Lab