Turk’s-cap Lily (Lilium superbum) is one of our most spectacular wildflowers in eastern North America. Its stunning flowers bloom right now in July and August. Native to wet meadows and rich moist cove forests and bogs from New Hampshire south to Georgia and Alabama, it is found in most counties in Virginia. While not common in the Coastal Plain, we do find it in wet meadows, seepage swamps, wet roadside ditches as well as alluvial and tidal swamps. 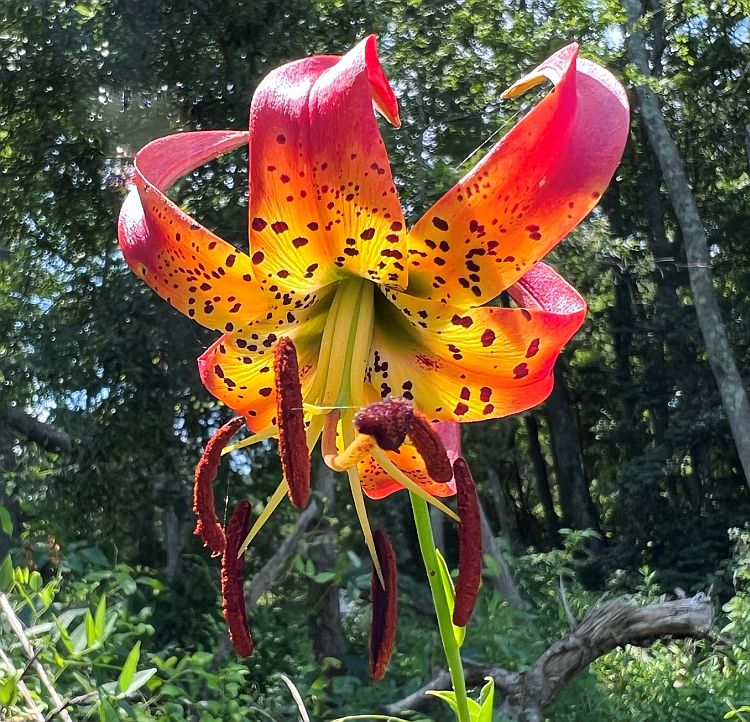 This statuesque plant is hard to miss in bloom when a single mature plant can bear up to 40 individual flowers atop elegant stems that can be 4 to 8 feet high. The individual three to four inch wide flowers are held in loose racemes with each blossom nodding from the end of a bent stalk. The strongly reflexed petals and sepals (tepals) curve back so they nearly touch at their tips, resembling a “turk’s cap.” Color varies from orange to deep red. It is well worth peering up into the floral tube of the flower to observe the greenish star-shaped throats and dark maroon to purple spots. This peek inside shows you these serve as nectar guides for the pollinators of this lily, which are equally showy. Six stamens surround the central style and extend dramatically from the center of each flower like fireworks shooting from the flower. Each stamen is capped with a large, dark chocolate-brown anther laden with pollen.

The Eastern Tiger Swallowtail butterfly is one of the most common pollinators of Turk’s-cap Lily — as well as Spicebush and Pipevine swallowtails and Great Spangled Fritillaries. Ruby-throated hummingbirds also visit the flowers. Ongoing research by Dr. Mary Jane Epps, Professor of Biology at Virginia’s Mary Baldwin University (funded in part by the VNPS), is studying the newly recognized phenomena of “Wing-Mediated Pollination” in Lilium superbum. You can read more about Dr. Epps’ research in the Fall, 2021 edition of Sempervirens. Dr. Epps reports that:

We observed dozens of clear examples of wing pollination, with the butterflies flapping their wings against the anthers and stigmas. So often a pipevine swallowtail or eastern tiger swallowtail would fly up to a flower and come out looking like a kid that got into a Cheetos bag — covered with orange Lilium pollen! 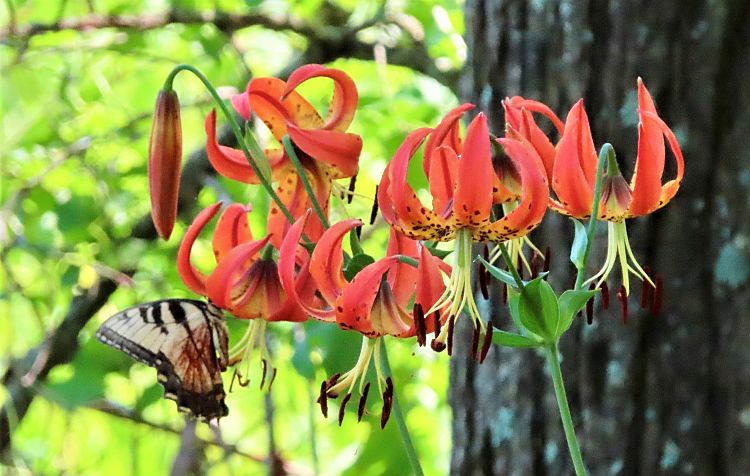 Turk’s-cap Lilies grow from a bulb sending up smooth, stout stems with leaves arranged in distinctive whorls around the stem. Leaves taper to a point at each end and have smooth margins and parallel veins. The fruit ripens in fall when 2 inch oblong capsules split open to release winged seeds. In ideal habitats this plant can spread into impressive colonies adding to this magnificent midsummer show. 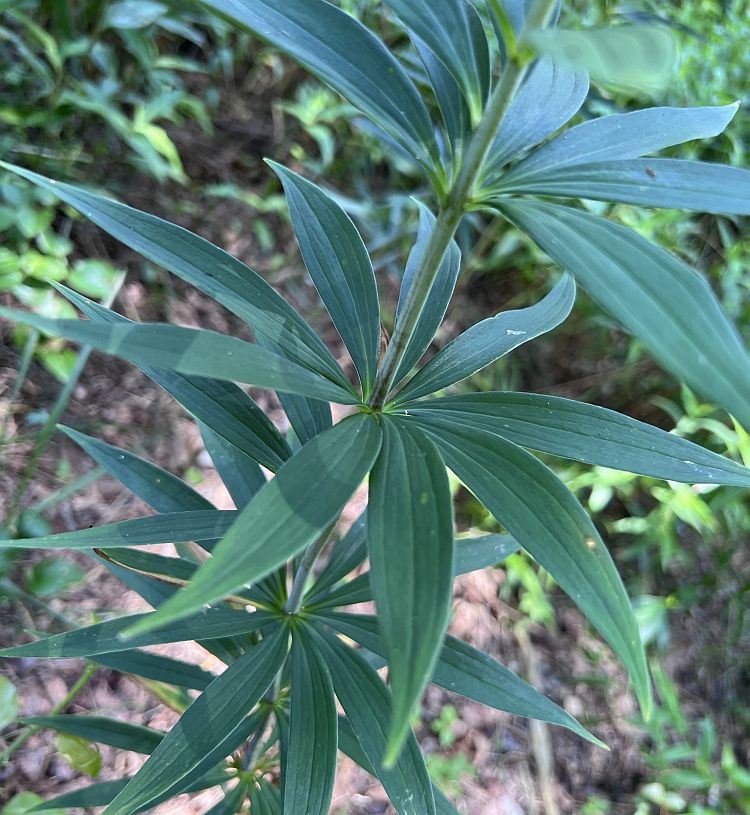 Fortunately for gardeners, Turk’s-cap Lilies are the easiest of our native lilies to grow preferring humus-rich, deep, moist soils in dappled shade but also thrive in sunny, damp meadows. Purchase nursery-propagated plants/bulbs and plant them 5 – 6” deep in the fall. Plants can be grown from seed, but these can take up to seven years(!) to reach blooming size, so it is worth purchasing bulbs. A mulch of natural leaf litter helps preserve the soil moisture they prefer. Once established, Turk’s-cap Lilies tolerate wet soils, drought and have no serious insect pests or diseases. However, deer can browse the tops ruining the blooms and voles sometimes damage the roots, so it is best to take steps to protect your lilies at planting. 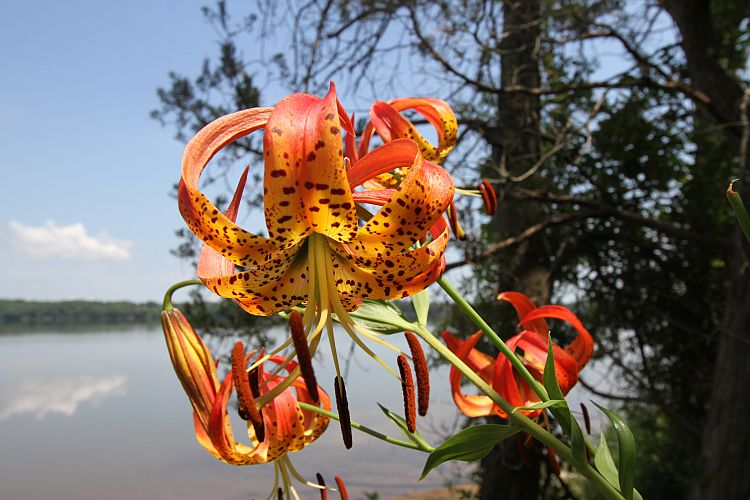 Try planting Turk’s-cap Lilies in groups of three or more as they grow in nature, where they are sure to add drama and beauty to any perennial or woodland garden. They are also perfect for naturalistic or pollinator/butterfly gardens or planted in moist meadows. Add this show-stopper to your garden this fall and dazzle friends and butterflies alike with an unusual and spectacular mid-summer feast of color.

Remember, this uncommon plant should never be dug from the wild – see it, enjoy it, take pictures but leave it where you found it.