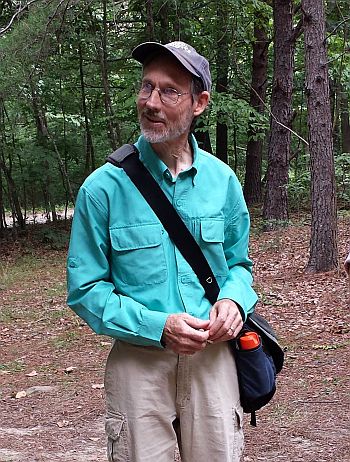 An Interview with Tom Wieboldt by Nancy Vehrs

Tom Wieboldt retired five years ago as the longtime curator for the Massey Herbarium at Virginia Tech. He grew up on a farm near Covesville in Albemarle County and currently lives in Giles County just west of Blacksburg with Ali, his wife of 38 years. They have a daughter who is married and lives in Shizuoka, Japan. Let’s learn a little more about him.

Q: As I like to ask everyone I interview for VNPS, how did you develop an interest in native plants?

It started early as my father taught me some trees and shrubs. Then as a teen, my neighbor, Peter Mehring, introduced me to birding. When he moved on to learning plants, I remember thinking, “Whoa! That’s just too much!” But that didn’t last long. We were teenage boys on adjoining farms with access to thousands of acres of field and forest and none of the distractions that kids these days face. We divided up plant families to learn so we could teach each other when we were out exploring. We learned from field guides at that time, but then my brother-in-law gave me a copy of Gray’s Manual of Botany, 8th edition. I was hooked.

Q: Tell us about your academic training and how you launched your botanical career.

I took my first botany course my second year at The College of William & Mary from J.T. Baldwin who was a great encouragement to me. The next year, I was really in my element learning plant taxonomy from Gus Hall. I already knew most of the plants we were quizzed on, much to the chagrin of the other students who claimed it wasn’t fair, but I used the opportunity to delve into families and genera I didn’t know, especially grasses. I also took plant ecology from Stewart Ware whose new wife, Donna, soon had a devoted following of helpers in the herbarium where we volunteered. Thus began a lifelong friendship of doing botany. I don’t know how it started, but we were both aware that there were numerous plants and places on the landscape that had not been revisited since Fernald and Long explored them in the 1930s and 40s. We read his papers in Rhodora and picked some species to go after on what came to be termed “Fernaldizing” expeditions. It was great fun and, of course, resulted in many interesting re-discoveries. A number of those sites are now state natural area preserves.

This period extended past graduation during which time I moved back to Albemarle County and hooked up with my birding friend, Mo (Charles E.) Stevens, who was now passionately collecting plants all over Virginia as part of a coordinated plan by Dr. Alton Harvill to map out the plants of Virginia by counties. Mo became a mentor in the truest sense of the word. The way I came to do botany was in every way greatly influenced but what I learned from him. We both loved ridiculously long hikes to get to remote places. His use of topo maps, knowledge of geology and soils, special interest in ferns, and intrepid desire to see what was around the bend are just a few of the ways he influenced me. For the years when I lived near Charlottesville, we made almost weekly collecting trips together.

I spent a couple of years in school in Utah which didn’t work out for me. My heart was with Virginia botany and collecting plants, but a seemingly near-death experience from malaria on a trip to Mexico didn’t help either! I came back to Virginia and resumed botanizing with Mo and Donna Ware. After a few years working for a surveyor and occasionally doing some volunteer work for The Nature Conservancy, I had a chance to work as a botanist when the Virginia Chapter of The Nature Conservancy hired Steve Croy and myself to develop a list of rare species and target some sites for TNC to acquire. This fledgling effort was called the Virginia Biodiversity Information Program. We were given office space at the herbarium at Virginia Tech due to the good graces of Dr. Duncan Porter, Curator. In less than a year, the position of Assistant Curator of the herbarium opened up and I applied and got the job.

Q: You were a long-time curator of Virginia Tech’s Massey Herbarium. Please tell us a little about the herbarium and what your position entailed. 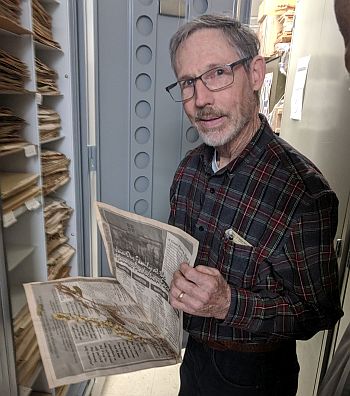 Tom Wieboldt at the Massey Herbarium
Photo by Nancy Sorrells

I was employed at the Massey Herbarium for 35 years, first as Assistant Curator, then as Curator when Dr. Porter retired. I was responsible for the vascular plant and fungal collections initially. Later, bryophyte and lichen collections were added. Beside standard curatorial duties, we provided identification and information services to the university as well as the Commonwealth, state and federal agencies, and conservation organizations. I especially wanted the Massey Herbarium to well represent the flora of the central Appalachian and mid-Atlantic regions. I saw my mission as growing the collection through personal collecting and trading specimens with people I knew who were making important discoveries. There were many deficiencies to be filled, but it was a bit of a heyday for botanical collecting in Virginia due in large part to Dr. Alton Harvill’s atlas project.

As in every discipline, computers began to change the herbarium. The “Information Age” was upon us and expectations were changing quickly. Herbaria were ideal for the creation of specimen databases, and nearly everyone jumped on the bandwagon. Georeferencing and imaging soon followed. This was a mammoth task, of course, especially for a regional collection with limited resources, so I dragged my feet at first. Moving the Massey Herbarium into this new era was my “new” job. The National Science Foundation poured federal money into programs to help, and we were able to hire students and introduce a lot of people to botany and systematic collections, in particular.

I shouldn’t neglect to say that this whole time, the Massey Herbarium enjoyed a very fruitful collaboration with the Virginia Natural Heritage Program, sharing knowledge and discoveries, helping one another with taxonomic problems, and continually refining our knowledge of the Virginia flora.

Q: Where are some of your favorite places to botanize? Have you botanized internationally?

I love rock outcrop communities of all types and have always expended considerable effort to get to and explore them. Shale barrens, in particular, are a favorite not only because of the endemic species, but almost more because of rare species sometimes found there. Recently, I’ve learned that includes some bryophytes not previously known about in Virginia. I also love wetlands, especially marl marsh wetlands. The reasons are twofold. First, they abound with my favorite genus of plants, Carex, and secondly, many weren’t very well explored. A third would be the fresh tidal marshes of the rivers entering the Chesapeake Bay. They are such pristine and idyllic places, especially when explored by canoe. 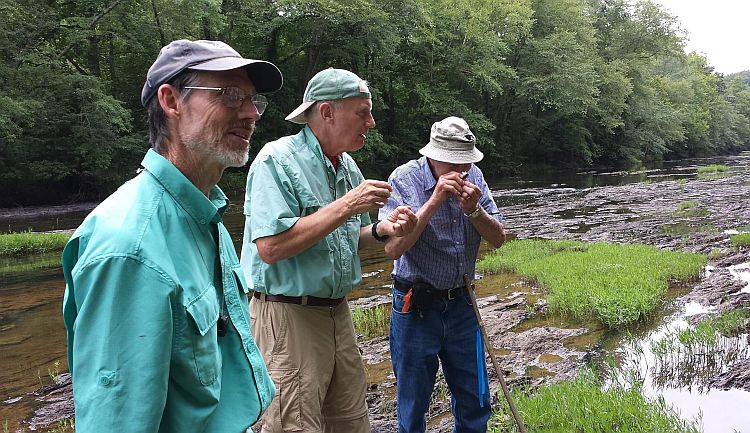 I have not botanized internationally in terms of research or systematic collecting. I do scrutinize plants pretty carefully, though, when I’ve had opportunities to travel. With a daughter in Japan these past 5 years, I’ve been there several times, which is quite fun because so many genera are shared between the Appalachians and east Asia.

Q: Do you garden with native plants, and, if so, what would we find in your garden?

I’m not much of a native plant gardener. I have a small fern garden with a few select species, but other than that, have only a few things that are special to me for one reason of another. Seeing the natives in their natural environs is what really interests me.

Q: What have you been doing since you retired?

Since retiring in October 2016, I’ve turned my attention to bryophytes and lichens. Although I collected and tried to identify specimens occasionally as much as 30 years ago, I never had the time to really get to know these groups. Working on both was fun, but now bryophytes have gained the upper hand! I’m collecting and donating specimens to herbaria, mostly the Massey Herbarium. I’m also still active with the Virginia Botanical Associates and, along with Johnny Townsend and Gary Fleming, administer the Digital Atlas of the Virginia Flora website.

Q: What are your hobbies and interests outside of botany?

I’ve been a birder since my high school days and still enjoy it, especially when traveling. Ali and I are serious vegetable gardeners. Whether you call that a hobby or not, I don’t know, but we like to eat fresh food and put a lot up for the winter, so it’s something we’ve always done. People often mention hiking as a hobby, but I think of it more practically. I often hike for exercise, and other times combine recreation with some botanical endeavor. For example, years ago I set a goal to get up on as many of Virginia’s 4000 ft. mountains as I could. It was a good physical challenge, but the plants also get pretty interesting at that altitude. Natural history passions consume most of my time, but I try to maintain a balance of sorts. Family is important to me, and I try to spend time reading the scriptures or books and articles to challenge and continue growing in my Christian faith.

Q: What is your favorite plant?

The genus of plants I’ve studied and collected the most is Carex. I couldn’t choose a favorite species. It’s a daunting genus at first, but perhaps the most informative one in the landscape because of the way its many species partition the ecological variation found in so many temperate regions. Even many botanists give them little attention. For me, that meant there was a lot to discover that we didn’t know about. And after you start looking at them closely, they are quite attractive! 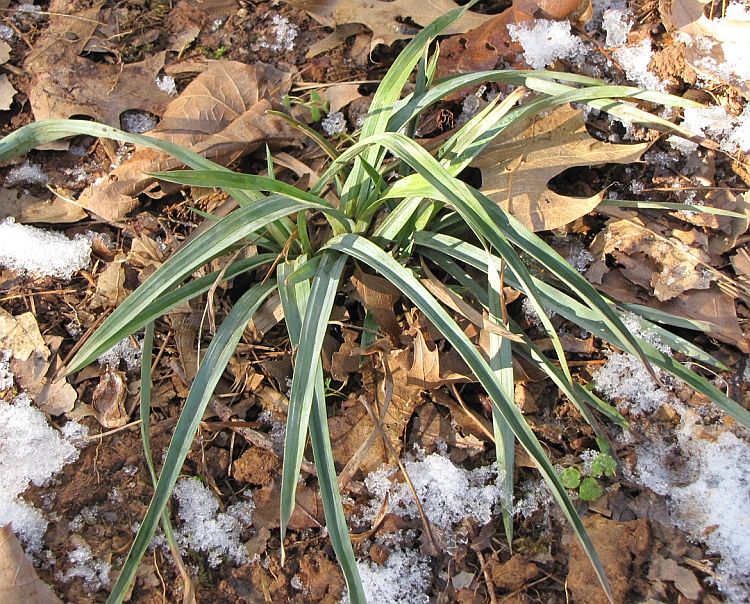 Q: What advice can you give students interested in a career in botany?

Over the years at Virginia Tech, I’ve told students that learning plants is a lot of work, but if it’s something they enjoy, it’s a great skill to have. But more than that, it opens one’s eyes to the great diversity of species on the landscape. This is, I think, the single most unappreciated aspect of nature in our culture today. So, even if you cannot find a job as a botanist, it’s well worth being one avocationally. There is certainly a need for more botanists, but whether our society will acknowledge and value it is an open question. I’m a firm believer in following one’s passions as much as possible. It took me quite a few years to find out I could actually make a living as a botanist!

This post originally appeared as an article in the Summer 2021 Sempervirens, the quarterly of the Virginia Native Plant Society.