The Pawpaw, Asimina triloba, is a handsome small tree that is as fascinating as it is curious. Pawpaw is a member of the Custard-Apple Family, the Annonaceae, a large family of tropical and subtropical species. Ranging from Florida and Texas north to New York and Southern Ontario, Pawpaw is the only member of this family to occur in north temperate forests. In Virginia, Pawpaws are common in the Coastal Plain and Piedmont in forested bottomlands, well drained floodplain forests, swamp hummocks and rich woods. They are an understory tree reaching up to 40 ft in height and tend to sucker into small colonies or “Pawpaw patches”.

Pawpaws are distinctive small trees and have large, rather tropical-looking, drooping leaves that can reach 12” in length and up to six inches wide. In shady areas, the leaves are fanned out along the stout branches, in an arrangement that allows the tree to absorb the maximum amount of limited sunlight beneath the often-dense forest canopy. In fall the lush foliage turns a clear, showy yellow, lighting up the shady understory. Pawpaws tend to spread into colonies via root suckers especially in rich, moist woods, so that what appears to be many individual trees is actually a single colony of genetically identical individuals. The bark is smooth gray-brown but develops small, warty raised pores (lenticels) as it ages. 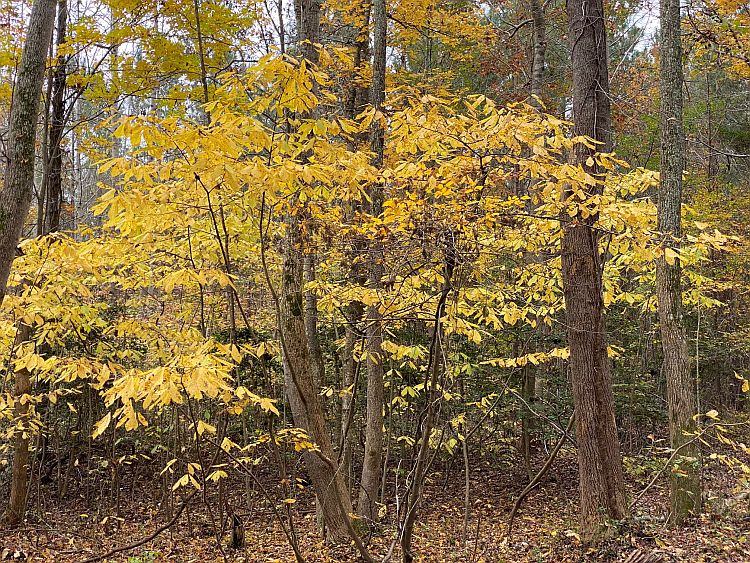 In early to mid-April, just before the new leaves emerge, Pawpaws begin to bloom with a most distinctive flower. The small, unusual flowers are intriguing, only about 1-1/2” wide, hanging from the bare branches like dark maroon bells. Each flower is beautiful when inspected closely, with three broadly rounded outer petals that curve back, revealing another ring of three smaller petals that surround the stamens and pistils in the center of the flower. The petals themselves have a heavy texture with impressed veins and their rich maroon-brown color that glows when backlit by the sun. If you sniff the flowers closely, you may notice the fetid odor of carrion that has evolved to lure their pollinators. Pawpaws belong to an ancient family of flowering plants that evolved about 85 million years ago and the dark red flowers and odor attract the carrion flies and scavenger beetles that pollinate them. Interestingly, flowers of trees in the same “patch” are genetically identical and often are not self-fertile, meaning a pollinator must carry the pollen from a flower in one colony to flowers in another colony to reliably produce fruit. This and the fact that their pollinators are not in great abundance, means that there is sometimes low fruit set in some colonies. 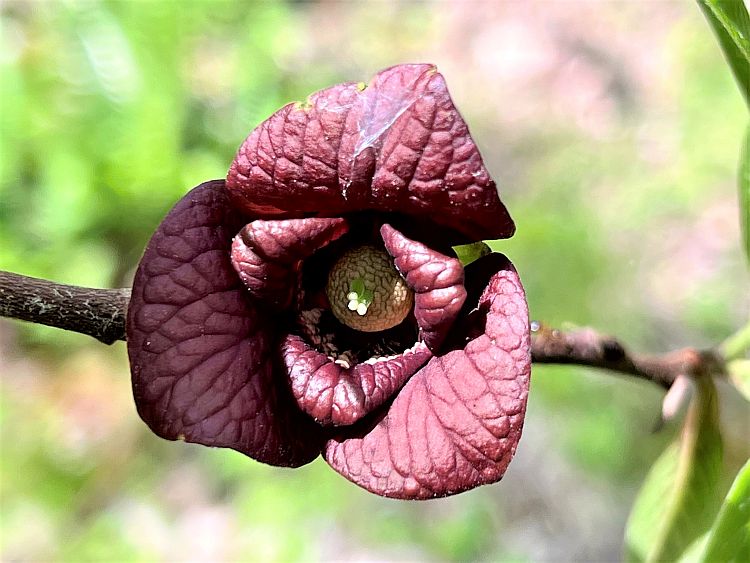 The flowers that do manage to get fertilized produce the largest edible fruit of any tree in North America. The lumpy fruit is technically a berry and can grow up to six inches long but is more often the size of a child’s fist. The green fruit often develops in clusters hidden beneath the huge leaves, typically ripening in late August through September in Virginia. It is considered a delicacy to many, who eagerly await the ripening fruit; a ripe Pawpaw has the feel of a ripe peach and a delightful fruity aroma. The fruit, with 10 – 14 hard, inedible brown seeds in the center, has a soft custardy texture inside the inedible skin and flavor that is often compared to very ripe bananas, with hints of melon, or even pineapple, papaya and mango. Various colloquial common names allude to the distinctive taste – Custard Apple, Wild Banana, Dog Banana, and Mandango. In fact, the name Pawpaw itself is believed to be derived from the similar “papaya”. The soft skin and flesh are easily bruised and damaged so is not suitable to commercial farming or sales, making it the perfect choice for home gardeners. 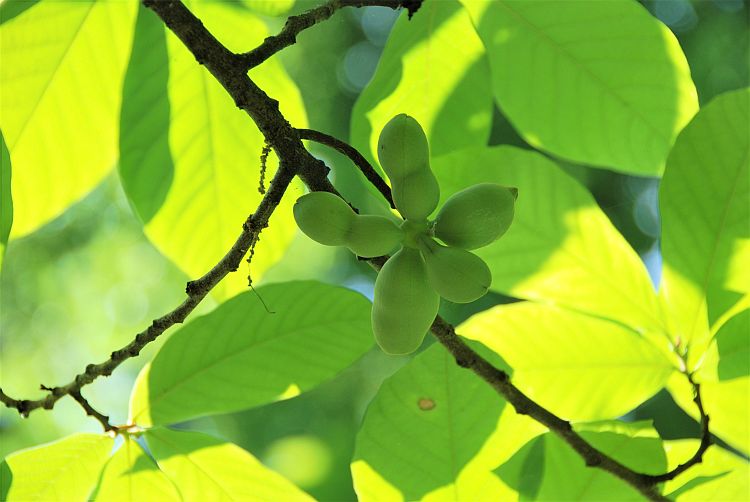 The fruit is relished by many species of wildlife as well as humans. Deer, racoons, opossums, squirrels, mice, wild turkeys and many other species of small mammals and birds eat the ripe fruit. In contrast, the crushed leaves smell a bit like asphalt and are extremely distasteful to deer and other herbivores and are rarely browsed. Interestingly, Pawpaws are the sole host for the beautiful Zebra Swallowtail Butterfly, whose caterpillars feed only on the foliage of Pawpaw, eating the tender new leaves and gaining protection from predators from the same chemical that makes the leaves so distasteful to herbivores.

Pawpaws are difficult to transplant from suckers, but small container grown specimens are easy to grow. They prefer moist fertile soils under the shade of deciduous trees or along a stream, where they will form a handsome grove. Pawpaws can also be trained as a single-trunk small tree and when planted in a sunny site will form a dense pyramidal small tree. Just water during droughts and clip out any rooter suckers that may occur. Because Pawpaws typically are not self-compatible, you will need to have two or more unrelated trees (from different clones) to produce fruit. Several cultivars of Pawpaws have been selected for enhanced fruit size and taste, so you can buy a couple of different selections to help encourage successful pollination. Some eager growers have gone so far as to hang “ripe carrion” in their tree to attract pollinators. Pawpaws are delicious eaten fresh from the tree as Lewis and Clark did on their trip and were a major component of Native American diets. They can be made into delicious pies, and puddings as Native Americans and early colonists did or even into ice cream as Pawpaw enthusiasts do today. Although be aware that some people are sensitive to touching the fruit and break out into a rash. 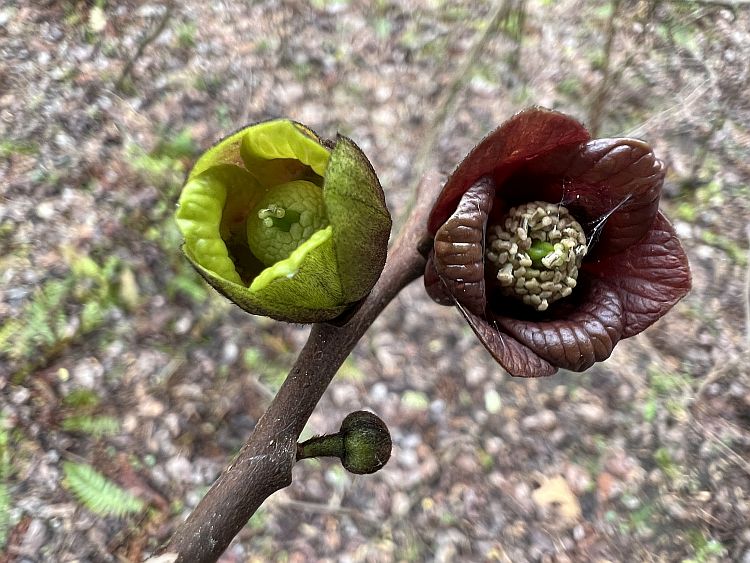 John Lawson, an early English explorer, provides an apt summary of Native Americans using Pawpaws in his 1709 book, A New Voyage to Carolina:

The Papau (sic) is not a large Tree. It has the broadest Leaf of any Tree in the Woods, and bears an Apple about the Bigness of a Hen’s Egg, yellow, soft, and as sweet, as any thing can well be. They make rare Puddings of this Fruit.