Pawpaws have a great deal to offer—handsome flowers in the spring, delicious and highly nutritious fruit in the early fall, plus they are the only host plant of one of our most beautiful butterflies, the zebra swallowtail.

Our pawpaw (Asimina triloba) is the northernmost member of the mostly tropical Annonaceae (or custard-apple) family. It is an understory tree, growing up to 40 feet tall. It has alternate, simple, unlobed leaves that are quite large (6 inches to 15 inches long by 2 to 6 inches wide), slightly broader toward the tip and tapering at the base. The flowers are a handsome rusty-brown color. It has traditionally been happiest growing in moist, well-drained and fertile soil, but this may be changing. According to the Digital Atlas of Virginia Flora, in recent years the species has spread to dry-mesic and dry areas and increased in abundance. Although the reasons are unclear, both the suppression of fire and unpalatability to deer may play roles. 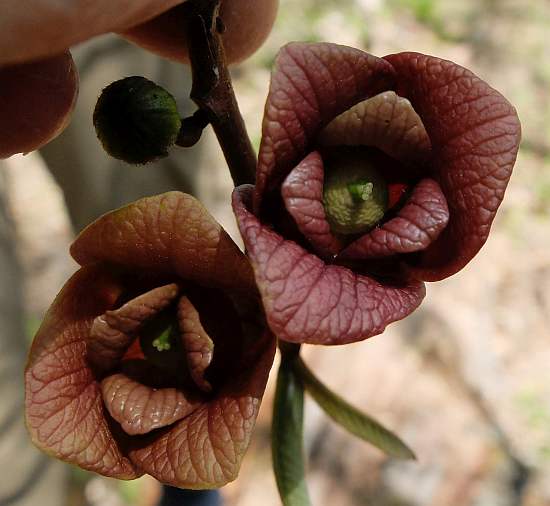 Crushed leaves give off a strong, unpleasant odor, a likely deterrent to many insect herbivores and leaf-browsing mammals. The flowers have a somewhat similar if less pungent smell. Not surprisingly given the color and odor, the main pollinators are flies and beetles, although apparently the flowers are not particularly attractive even to these insects as poor pollination has been an obstacle to efforts to grow pawpaws commercially. 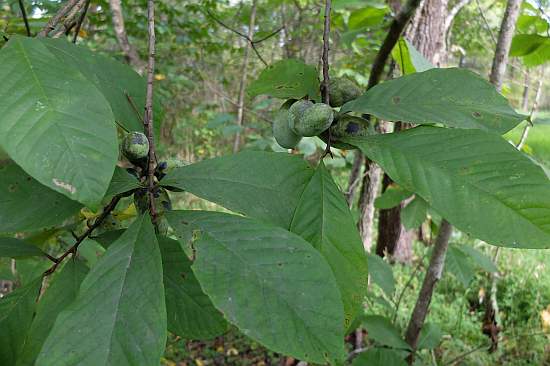 The pawpaw fruit is the largest edible fruit native to the U.S. and can weigh up to a pound although 5 to 7 ounces is more typical. When ripe, the flesh is soft and custard-like, with a flavor that has been described as a blend of banana, mango, and pineapple. In addition, when compared with apples, oranges, and bananas, the fruits are relatively high in protein and fat, with good amounts of vitamins C, riboflavin, and niacin, and of calcium, potassium, magnesium and several other useful minerals. The pulp can be mashed and substituted for bananas in cooked recipes but I have never bothered. They are delicious straight off the tree and that way it’s easy to deal with the several large seeds scattered through the flesh. 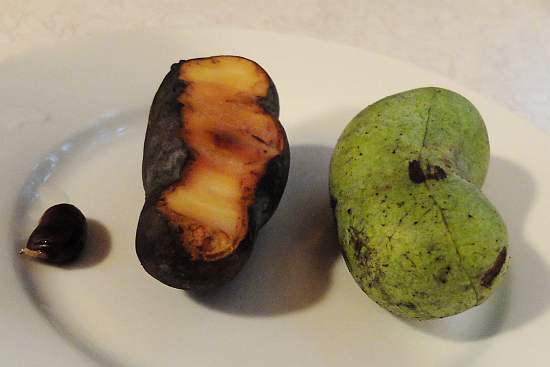 While there have been efforts to grow the fruit commercially, they have been largely unsuccessful. The fruits are easily bruised and don’t store well so that they are difficult to transport and market. Pollination problems resulting in relatively low fruit set are another problem. Also, the trees tend to sucker so that trees growing in the wild may produce a grove of clones that are not self-fertile. Happily, on our farm we have several clusters of trees that bear well and each fall we keep a watch on our most productive trees for ripening fruit. 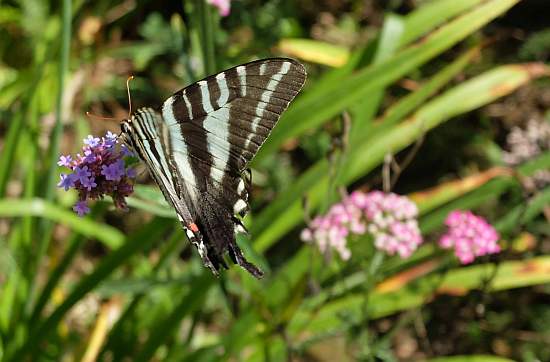 One interesting question is how the seeds are spread. Although the trees are quite common in our area and in fact grow in 26 States, ranging from New York to Florida and west to Texas and Nebraska, the seeds are too large to be ingested by our native mammals except perhaps black bear. While smaller mammals may carry the fruit a short istance before eating it, the range must be quite limited. One hypothesis is that the seeds were originally distributed by now extinct fruit-eating megafauna such as mastodons and giant ground sloths. It seems likely that since humans arrived in the new world, they have been the main dispersers of seed. 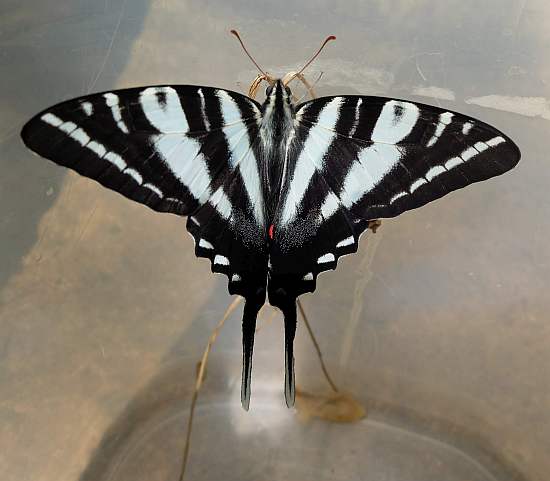 Compounds called acetogenins in the leaves and leaf twigs are repellent to most insects, birds and browsing mammals. Zebra swallowtail caterpillars, by ingesting these compounds, make themselves unpalatable to many predators.

In mid-April a couple of years ago my daughter, Mary Jane, who spends a great deal of time in the woods observing nature, was watching a zebra swallowtail butterfly flitting about a pawpaw tree that was just leafing out. She soon realized that the butterfly was laying eggs on the newly emerging leaves, but it didn’t simply choose a likely leaf and deposit a mass of eggs. Instead it lay only one egg on a given leaf. (My first thought was that this was a way to assure that some eggs escaped predators, but apparently the caterpillars can be cannibalistic so that scattering the eggs helps protect the caterpillars from each other.) 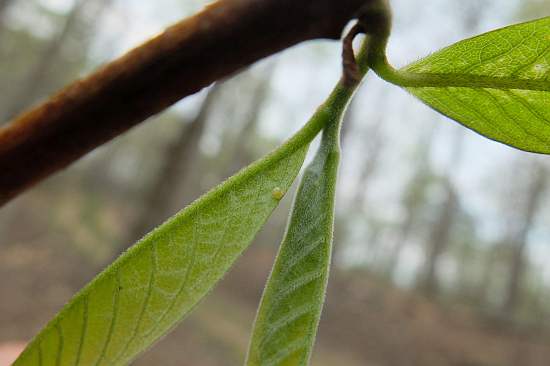 Mary Jane also observed that the butterfly visited the base of the tree, where it laid an egg an inch or two above the leaf litter. This surprised her so that she checked another population of pawpaws and found individual eggs at the bases of several of these trees in addition to those on leaves. Returning to the tree two weeks later, Mary Jane found several young caterpillars, and collected one to rear in a jar and observe. The caterpillar matured successfully and made a chrysalis. At that point Mary Jane went off to the University of Virginia’s Mountain Lake Biological Station to do research and left me to babysit the chrysalis, which in early June hatched into a beautiful zebra swallowtail butterfly. 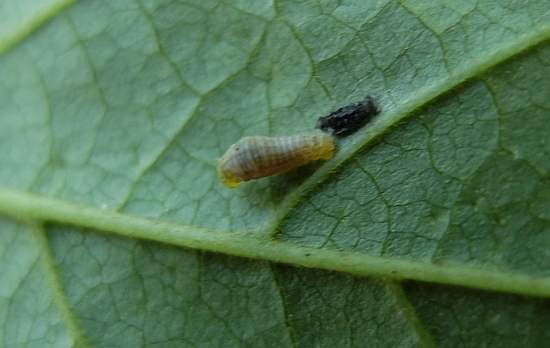 Zebra swallowtails prefer to lay their eggs on newly emerging leaves since these are higher in acetogenins, but this would seem to limit the butterflies to a single generation born in the spring. Yet they overwinter in chrysalis form suggesting a late-season crop of caterpillars is necessary for the long-term survival of the species. It turns out that there are at least two moths, the pawpaw sphinx moth, Dolba hyloeus, and the asimina webworm moth, Omphalocera munroei, whose caterpillars also feed on pawpaw and these may do enough damage to the tree to encourage new leaf growth, providing young leaves for eggs laid later in the season. 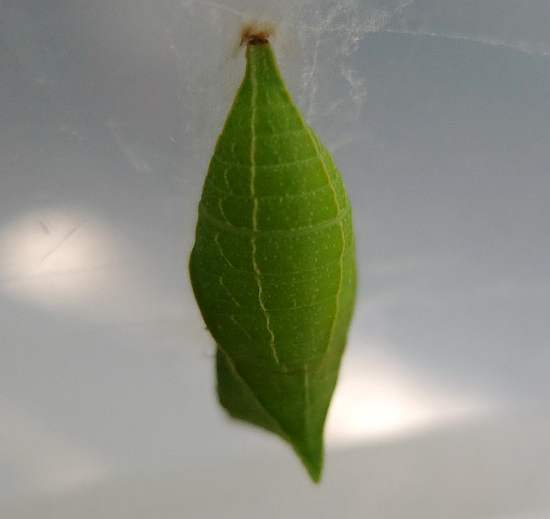 Want to know more? Here are my helpful references:

This article first appeared in the Fall, 2019 edition of The Declaration, the newsletter of the Jefferson Chapter of VNPS. All photos by Mary Lee Epps.