Driving along sandy roadsides and fields of the coastal plain in summer, it is always a delight to find our native Purple Passionflower (Passiflora incarnata), a deciduous vine with dark green, three-lobed leaves and exquisite, showy flowers and edible fruit. This vigorous vine is native to the southeastern United States from Kansas to Pennsylvania and southward to Florida and Texas. In Virginia, it is most common in the southeastern coastal plain and outer Piedmont. Occurring in both Lancaster and Northumberland counties, it is one of the hardiest Passionflower species. It is quite drought tolerant once established and adaptable to a variety of soils, but prefers sandy or loamy soils and sunny sites. It is found along roadsides and other open disturbed sites, and in meadows, fields, and thickets, as well as in low moist woods and along stream banks. 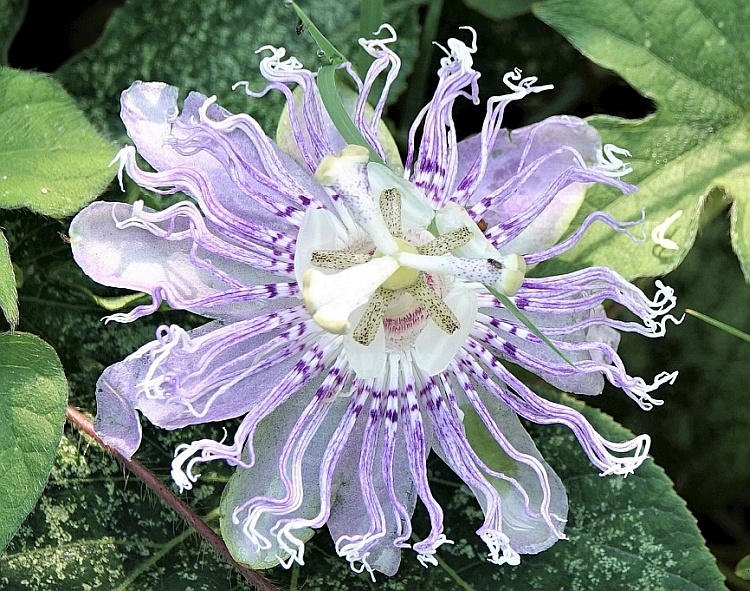 The exquisitely beautiful flowers belie the rugged nature and exuberance of this vine, which grows quickly and often spreads by root suckers. The fragrant flowers bloom over several months from late May to August and are real show-stoppers. They are about 3” in diameter with an intricate fringed central crown of wavy bluish-purple filaments banded with darker purple that radiate out above ten pale bluish-white petals and sepals, like a pinwheel. Above the crown dramatically large pistils and stamens are themselves  showy and speckled with purple. Words really can’t describe the beauty of these flowers! In this case a picture really is worth a thousand words… A succession of blooms dazzles for several months although each individual flower lasts only a day or two.

The flowers are followed by fleshy, egg-shaped fruit that ripen from July to October turning from green to yellow. They are delicious eaten right off the vine but also make wonderful jellies, jams, and desserts. Most folks cut the fruit in half and scoop out the inside while skipping the skin – the taste has been described as appealing, musky, or guava-like. The crunchy seeds in the fruit are edible if you are so inclined. The showy flowers themselves are edible and make a beautiful garnish. The hollow fruit make a loud “popping” sound when stepped on, giving rise to another common name, Maypop, although some believe the name comes from the new shoots that “pop” out of the ground in spring in May. 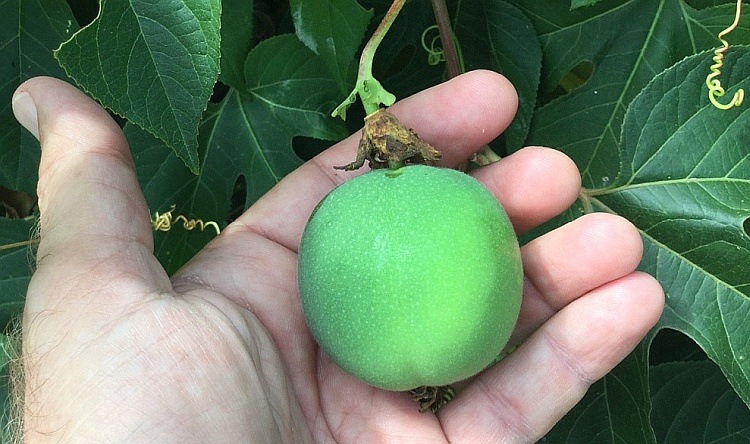 Roger Gruben shows off a Purple Passionflower fruit in his garden. Photo by Roger Gruben

A large variety of pollinators, especially bumblebees, carpenter bees, and butterflies, literally hover over the fragrant blooms. Ruby-throated hummingbirds are also attracted to the nectar. Purple Passionflower is the host plant for several of our showy butterflies, including the Variegated Fritillary, Gulf Fritillary (an uncommon visitor in our area), and Banded and Red-banded Hairstreaks. Numerous songbirds and small mammals relish the fruit as well as humans. Native Americans made a poultice from the roots to treat cuts, bruises, earaches and inflammations, and a tea and tonic were cooked from the roots to ‘sooth the nerves’ and treat insomnia. Although modern medicine hasn’t verified all of this, Purple Passionflower is still a popular herbal resource.

This beautiful, vigorous vine climbs by tendrils and is best grown on large trellises, arbors, pergolas or along fences or walls, but it will also happily scramble over the ground covering a large area as it suckers from its roots. It can make a great ground cover or bank stabilizer with the vines tumbling down a slope and spreading by root suckers to anchor a large area. Of course the added bonus are its long lasting blooms alive with pollinators and edible fruits.