The most recent article about the monarch butterfly in the New York Times has once again raised the question of whether we should be planting non-native milkweed. The milkweed being discussed was the tropical variety most widely available in the usual stores, Asclepias curassavica, known commonly as Scarlet or Tropical milkweed. Ongoing research points to problems with this plant that are mounting as time goes by including increased presence of the deadly parasite OE, (Ophryocystis elektroscirrha).

Last year questions came up on the VNPS Facebook page about the non-native milkweed, Asclepias physocarpa, humorously known as both hairy and monkey balls. One of our VNPS fans knew of a place that was giving away seeds of this plant and wanted to share the news. At this point, the administrators on the page had some serious concerns. Nicky Staunton reached out to Lincoln P. Brower, Research Professor of Biology at Sweet Briar College, and renowned expert on the subject of the monarch, frequently quoted in the NYT himself,  to see what his opinion was. He wrote us back with a two-part reply covering both of the  non-native milkweeds; and here is what he said:

Asclepias physocarpa is actually Gomphocarpus physocarpa. It is an African native milkweed that has been introduced into Australia and elsewhere and the monarch butterfly is able to lay eggs on it and its caterpillars eat it without negative effect as far as is known. When I was at Amherst College, I raised monarchs on it for experimental purposes.

My advice is that because it is a non-native plant and because monarchs that feed on it will carry different chemical fingerprints from those reared on native milkweeds, and because it may possibly act as a physiological trap for monarchs during the fall and spring migrations, I advise against encouraging its use as a monarch garden food plant.

I also am against planting Asclepias curassavica, (Mexican Butterfly weed, Blood-flower, Scarlet milkweed, Tropical milkweed) out of its range.

Sonia Altizer who is a prominent monarch biologist at the University of Georgia agrees with most of my points if not all. She is especially concerned re curassavica potentially enhancing the “Oe” protozoan parasite infection.”

NOTE: Since last year, as mentioned in the above referenced NYT article, Sonia’s predictions of negative results are being supported by numbers in her research.

The following article, also by Lincoln Brower is reprinted here with his permission. 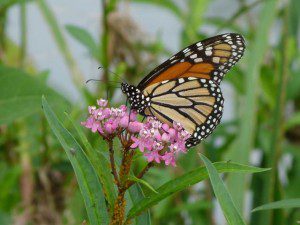 There are disagreements and conflicting hypotheses amongst both professional and non-professional monarch folks in regard to the wisdom of the current widespread planting of Asclepias curassavica in butterfly gardens. In reading through posts on Monarch Watch, it is resoundingly evident that no study has yet been done which strongly supports or negates the hypothesis that I have put forward.

If my hypothesis is correct, then the widespread planting likely is detrimental;

if incorrect, then planting it likely does not detrimentally effect the breeding biology of the monarch.

As Chip Taylor implies, many variables need to be controlled. I do not buy his argument that what happens in a Kansas garden is evidence against the detriment hypothesis because of the latitudinal difference between his garden in Lawrence, Kansas and my former gardens in Gainesville, Florida. Because monarchs can not survive in areas that are severely frosted, what is crucial to resolve is what actually happens during the fall when migrating monarchs encounter extensive plantings of curassavica in the south.

What is needed to resolve the issue are carefully designed experiments. Among aspects that the experiments must consider are: latitude, day length, rate of change of day length, sun angle above the horizon and the natural phenology (changes in individual plants through time) of the native milkweeds.

Just because curassavica is easily cultivated does not justify increasing its geographic range and abundance.Taylor is correct that curassavica is a native milkweed in the Neotropics, and that monarchs have co-evoved with it. But these two facts actually argue against planting curassavica widely beyond its natural range in temperate North America.In conclusion, we are not going to solve this issue without carefully controlled experiments.

Meanwhile, look before leaping: if there could be a problem, don’t plant Asclepias curassavica; instead, encourage native milkweed propagation. (Note: I have not discussed other detrimental issues of extensively planting curassavica including the possibilities of increasing Oe disease infection, confusion of cardenolide fingerprinting, and how curassavica might negatively effect the spring remigration from Mexico through the Gulf Coast states, especially Texas.)

Many thanks to Lincoln for his generous and timely response to our questions. Because there is serious concern by researchers that it could be detrimental to the future of Monarch butterflies, caution is recommended in deciding to incorporate non-native milkweeds into our Virginia gardens. Native milkweeds will assuredly be beneficial in all ways, and will also do no harm.