Today, the first day of April, has dawned cold with rain and winds after a week of mild weather, and I seek solace in the first harbingers of spring. A hike to Cabin Swamp in Hickory Hollow Natural Area Preserve is just the spring tonic needed. Sure enough, the showy Marsh Marigolds, Caltha palustris, are already in bloom, flaunting their showy bright yellow flowers above mounds of glossy green foliage. They create a dramatic and welcome spring show when most of the plants in the surrounding swamp have barely begun to emerge from the grays and browns of forest floor. 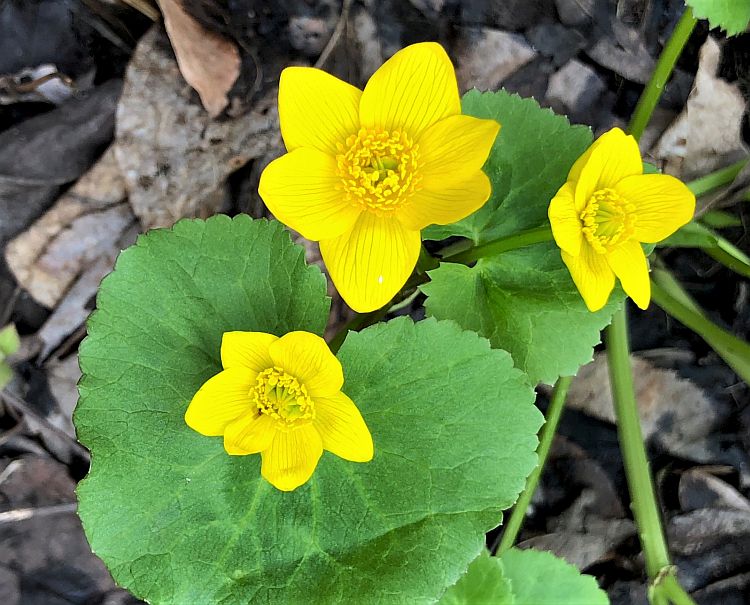 Marsh Marigolds have many common names, including Kingcup, Cowslip, Cup of the Marshes, and more, but the most frequently used common name, Marsh Marigold, is partly misleading, as while they are marsh dwellers, they are not related to marigolds nor do they look like them. They are members of the Buttercup family, the Ranunculaceae, and like other members of the buttercup family they do not have true petals, but instead feature 5 to 9 showy, bright gold waxy sepals, (which look like petals) that surround a bushy burst of stamens and pistils in the center. The showy 1-1/2 to 2” wide flowers are held on branched stalks a few inches above the rich green foliage making a stunning show.

The flowers open sequentially, brightening the woods from late March to June and offering a long season of bloom; just an FYI, this year the blooms are about two to three weeks behind last year, which was exceptionally mild. The smooth lustrous leaves are handsome in themselves, with a distinctively heart or kidney-shape and finely toothed margins and held on long, hollow stalks. The leaves continue to expand in size as they mature reaching up to 5” across by summer, long after the flowers have ripened and set seed, giving the swamp a lush, tropical look. Plants form handsome mounds of foliage that are typically about 1-1/2’ high and wide. Seeds ripen in pods or follicles which split open in summer releasing elliptical red seeds. As summer heat settles in and soils dry, the foliage will often begin to turn yellow and go dormant. 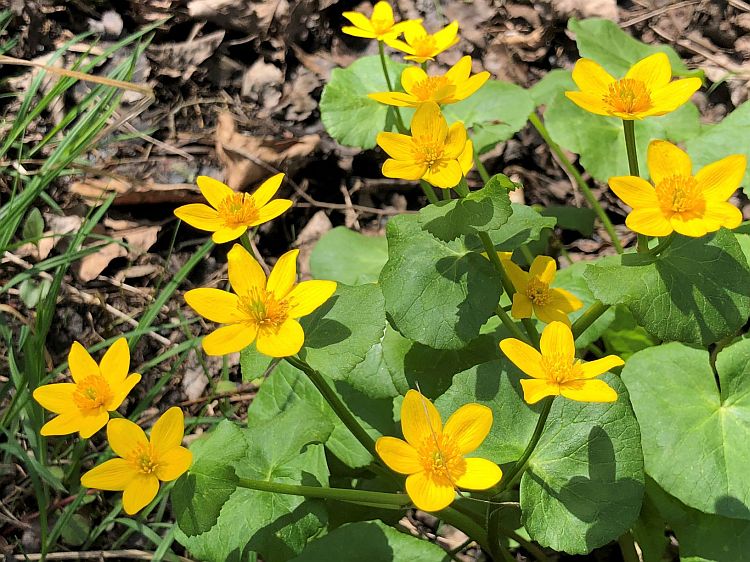 This perennial tends to spread by rhizomes into small colonies in wet soils and seepage swamps as we have at Cabin Swamp. They are native to swamps, seeps, fens, and low wet woods and meadows, and are circumboreal in northern areas but occur in North America from Newfoundland west to Manitoba, south to Virginia and along the mountains in North Carolina and Tennessee. There are also separate populations in Alaska and the Pacific northwest. While common in the mountains of Virginia, Marsh Marigolds are rare in the Piedmont and Coastal Plain of Virginia being found only in a few Coastal seepage swamps at the foot of steep ravines, such as the rare calcareous seepage swamp of Hickory Hollow’s Cabin Swamp. In these rare habitats, other unusual mountain disjuncts also make their home. Mountain disjuncts, as the phrase suggests, are species normally found in the mountains, but which occur in distant habitats without populations in between.

We are lucky indeed to have such a beautiful and rare seepage swamp to enjoy here in Lancaster County that is protected by the ownership of Northern Neck Audubon Society and managed by the Virginia Department of Conservation and Recreation.

Despite their rare to infrequent occurrence in our area, Marsh Marigolds are fairly easy to grow and maintain in gardens with consistently moist soils such as along the margins of ponds, streams, bogs, or low swampy areas. They can tolerate shallow flooding up to 4” during spring. While they bloom more profusely in full sun, afternoon shade is beneficial in our southern climate, as Marsh Marigolds may go dormant in summer if the soil dries out. The fleshy rhizomes can be divided in fall to increase plantings or they can be planted from seed, but never, ever collect these treasures from the wild! 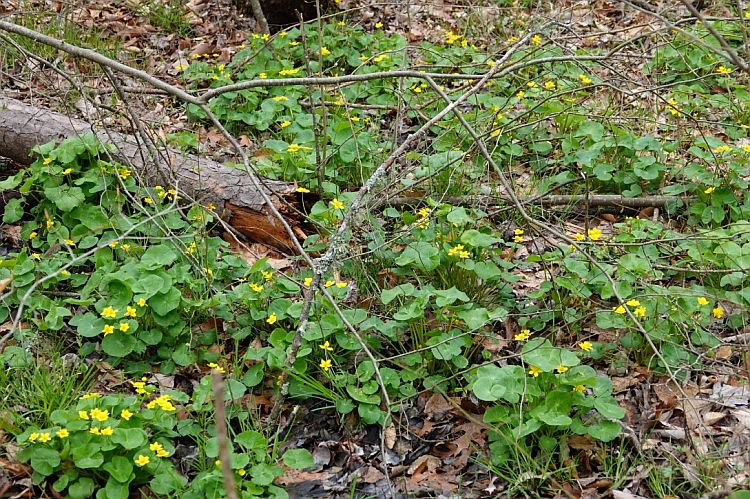 All parts of Marsh Marigold are toxic, and some folks are reported to be sensitive to the sap. Native Americans are said to have made medicinal teas from the roots and foliage. Marsh Marigolds are a favored nectar and pollen source for early spring pollinators such as bees, bee flies, beetles, butterflies and even hummingbirds. The seeds are fed on by many songbirds.

So, take a walk in the woods at Hickory Hollow this month and then think about planting Marsh Marigold in your water or bog garden, to brighten your early spring landscape. As the English herbalist Nicholas Culpepper wrote in the 1600s, “this plant comforts the heart and stirs up lust” as a harbinger of spring and the floral beauty of our native spring wildflowers that will follow in a few short weeks!

All photos by Betsy Washington