Huntley Meadows probably has the largest population of purple milkweed in the state according to Gary Fleming, Vegetation Ecologist for Virginia’s Natural Heritage Program. For a number of years, through efforts begun by its Past President, Marianne Mooney, the Potowmack Chapter has been providing support to Huntley. When recent water control efforts caused major disruption and removal of plant material, Potowmack agreed to provide more substantial support to facilitate rapid and well-directed restoration of plantings. The accompanying report was developed in part through research and field studies by the intern supported by the Chapter contributions.

Asclepias species (milkweeds) are perennial, flowering plants that prefer near-full to full sun exposure and soils near flowing water.  They have medium to dark green leaves opposite each other on the stem, each pair at right angles to those above and below. The flowers are arranged in umbels, umbrella-like formations, and vary in color across different species. Milkweed flowers have an unusual shape; five of the ten petals are oval-shaped and point downward, while the others are hood-shaped and point upward. A horn protrudes from the inside edge of each hood, and curving towards the stigma in the center (USDAZone9). Pollination is complicated by the structure of the plant’s reproductive organs, and even if successful, the resulting seed pods are often aborted due to infertility or unfavorable conditions (Brock). Several species of milkweed are known to remain underground during harsher circumstances, reappearing a few years later when the environment is habitable (Brock).

Common to all milkweeds, breaking any piece of the plant releases a sticky, white sap. Milkweed sap contains cardiac glycosides, the toxins that repel most insects and some other organisms that might otherwise prey on the plant. The Monarch caterpillar, however, remains undeterred. Not only is it immune to the toxins, but it stores them in its tissues and becomes poisonous itself. This defense system also protects the milkweed because it deters predators of both the caterpillar and the plant. While the caterpillars eat the leaf tissues of their host milkweed plant, the damage done to the leaf tissue is less than the potential damage from predators, which makes the relationship between plant and insect mutually beneficial. 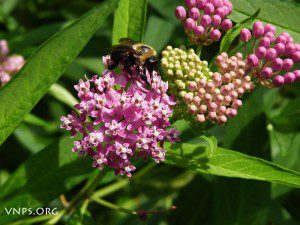 Asclepias purpurascens (Purple Milkweed) in particular is classified as Imperiled in Virginia (VA_DCR), and because it is a host plant for Monarchs, protecting the plant is an important part of conserving the natural habitat of Huntley Meadows Park. It is most easily distinguished from other species by the vibrant magenta color of its flowers, but also by the strong downward point to its horns. Purple milkweed is also more tolerant of shade than other species and is slightly shorter, with a maximum height of about one meter  (NE_FS). Previous reports give conflicting information on whether this species in particular has rhizomes or can spread from them (Brock) (USDAZone9) (MA_Study), but either way, it does not appear to survive as much environmental stress as other species.

The following data and gathered at Huntley Meadows Park suggest correlations between the difference in stem count over time and factors such as habitat conditions and methods of park management. It is critical to note that a large-scale wetland restoration project was conducted during 2013-2014. Water levels were lowered to drought conditions in 2013 for construction purposes, and then raised to higher levels than usual in 2014. Affected areas are still recovering from the massive environmental disturbances, including locations favored by purple milkweed.

All three meadows included in both surveys are adjacent to the central wetland, closer to the outflow side. The meadow populations grew by 41.9% between 2012 and 2015, with two out of the three meadows experiencing a substantial increase and the other a notable decrease.

There were no major changes (planned or otherwise) in the Peninsula meadow, which experienced a decrease of 30.9%. Populations in or close to the tree line in 2012 tended have fewer individuals in 2015, especially those closer to the wetland; seven stands disappeared completely. Areas with more sun exposure generally had a higher stem count in the second survey, or had little or no change.

The park maintains the Bluebird meadow with controlled burns; there have been two full burns and one partial between 2012 and 2015. Although two small stands vanished from shaded areas, the stem count increased by 344.6% . The most dramatic increases occurred in the stands along the edges of the burn locations, which not only shows that purple milkweed can survive controlled burns, but also suggests that it may benefit from the fire specifically.

The environment of the Tower meadow is somewhat different from the previous two, as it has a slight incline and is closer to the wetland outflow. Both of these factors increase the flow of water across the area, which favors nutrient deposition for the purple milkweed population. The Tower meadow is maintained by bush-hogging to clear the area of taller plants and small trees. Of the locations surveyed, the Tower meadow had the largest purple milkweed population and grew from 743 to 1,212 plants. Three stands (of 13, 8, and 8 stems) had especially high canopy coverage and did not return in the second count. The density of stems in each stand varied greatly; some stands shown on the map covered a large area, while others had similar numbers of plants across a much smaller area. Greater sun exposure seemed to encourage growth of the more compact groups, as they only grew in areas of full sun towards the center of the meadow. When compared to the other locations, the large stem count in the Tower meadow would suggest that it has the most favorable habitat. It gained the largest number of plants (469), however percent increase was far lesser than the Bluebird meadow (63.1% vs. 344.6%).

Comparing the three locations surveyed in both years, purple milkweed populations fared better in meadows with maintenance done than without. Because the peninsula meadow has been left unchanged, it lacks the periodic reductions in competition experienced by the maintained meadows, leaving fewer resources available for the purple milkweed. Due to the differences in the Bluebird and Tower meadows (size, elevation, position relative to the wetland), more data is needed to conclude definitively whether burning or bush-hogging creates a more favorable environment for the plants.  However, the methods themselves differ in usage requirements and effects, and considering those differences alongside the empirical data results in a better understanding of the population changes. 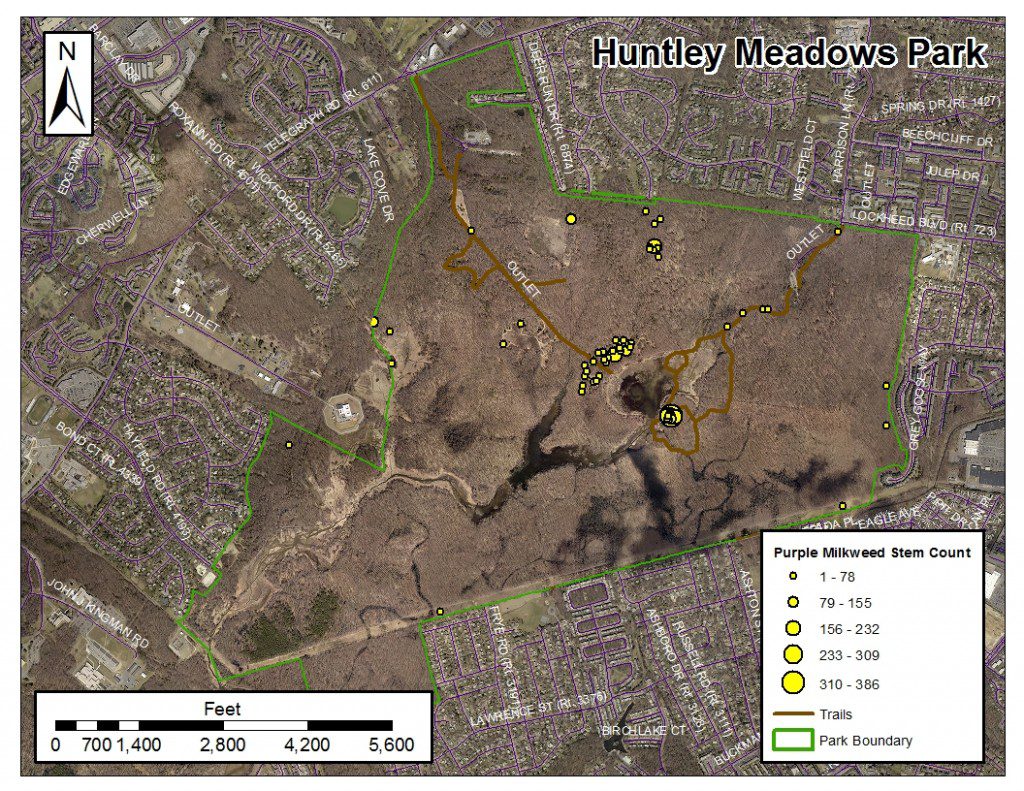 Despite the limited times and conditions under which controlled burns are effective, the fire speeds decomposition of plant matter, making the nutrients more readily available than they would be otherwise (FS USDA). Bush-hogging is much more flexible in usage because it is less dependent on environmental and weather conditions; however, it does not have the same effect on the accessibility of nutrients. The burns prescribed for the Bluebird meadow most likely contributed to the massive expansion in the purple milkweed population, as the decrease in competition and increase in nutrient concentration would provide an excellent environment for new plant growth. The significantly larger number of individuals in the Tower meadow may be related to its location; being inclined and the closest to the wetland outflow, it would have the most water flow of the group, and the resulting soil condition would be able to support a greater number of plants over a long period. However, the high density of flora in the meadow creates a much greater competition for space, which would contribute to the smaller relative increase in the population of purple milkweed.

In addition to the three meadows, there were several smaller sites common to both years. One site on the trail at the Visitor’s center had 8 stems in 2012 and remained the same for 2015, a group of 5 stems farther down the trail grew to 25 by 2015, with an additional 41 new stems nearby, and the stream location expanded from 12 to 441 stem. Due to the more isolated nature of these groups, more data is needed to understand the causes for the changes (or lack thereof) in their populations.

Of the locations new to the survey in 2015, two were meadows, two were wetland adjacent, and several were scattered along trails and easements. The purple milkweed at these previously unrecorded locations accounted for 33.8% (904 stems) of the 2015 population, and 44.7% of the total difference in stem count. The scattered locations had 87 stems altogether, ranging from 3-18 individuals per stand. The First Meadow had only two plants, close together and near the path’s edge. The Back Meadow had two stands with 25 stems each. The small wetland towards the north had one stand with 148 stems. The wetland on the western border of the park had a total of 127 stems across three stands. As these locations have only been surveyed once, there is no reliable way to predict how their populations will change without further data.

Despite the uncertainty of why different milkweed populations have changed the way they have, and what can be done to protect and support them, this much is certainly clear: the wetland restoration project and the effects thereof have greatly benefitted the purple milkweed population at Huntley Meadows Park.

NOTE: The Potowmack Chapter has provided a significant contribution to help fund a Summer Internship for 2016 focused on native plants and habitat in the park. We look forward to hearing of their experiences and appreciating their work on behalf of this treasured natural resource.