Along with Asters, Goldenrods are the dominant flowers in September. Some of them continue flowering into October, and you will see their fluffy seed heads all winter. Goldenrods have small-flowered, yellow spikes and sprays. Twenty goldenrod species are frequent in the Piedmont Chapter area. Note that the large leaves at the base of the plant are often key, not the smaller leaves up the stem—sometimes a problem because the basal leaves may not be there any more or may be hard to find under other vegetation.

The Goldenrods in our area are in the Solidago genus, except for Grass-leaved Goldenrod, which has been moved to the Euthamia genus (E. graminifolia). Euthamia differs from Solidago by having flat-topped flower cluster and narrow leaves.

I divide Solidago into three groups based on how the flowers are clustered:

Other species of the multiple, curved cluster types have leaves that are more or less uniform or gradually reduce up the stem. Late Goldenrod (S. gigantea), Tall Goldenrod (S. altissima), and Canada Goldenrod (S. canadensis) are all tall and difficult to tell apart. Their leaves are long and narrow and have three veins, one on each side of the center one. Late Goldenrod’s stem is smooth, usually with a white bloom. It likes wet places. The Tall and Canada species once were merged. Their stem, at least in part, is downy. They are both very tall with a whorl of leaves all along the stem. Tall Goldenrod’s leaves are barely toothed; Canada’s sharply. Sweet Goldenrod (S. odora) leaves have only one main vein and have no teeth. Rough-stemmed Goldenrod (S. rugosa) leaves also have only one vein, have teeth, and are usually rough as is the plant’s stem.

Three species have flower clusters growing from the leaf axils. S. flexicaulis is called Zigzag or Broad-leaved Goldenrod. The stem bends or zigzags from axil to axil, though what clearly distinguishes this species are the sharply-toothed, egg-shaped leaves—the only species where the leaves are wide up the stem. The other two have long, narrow leaves that separate the flower clusters growing from the axils. Instead of standing upright, they often form an arch. Blue-stemmed or Wreath Goldenrod (S. caesia) supposedly has a blue stem, but I find that unreliable. However, its stem is cylindrical while Curtis Goldenrod (S. curtisii) stems are marked with fine parallel lines or grooves. 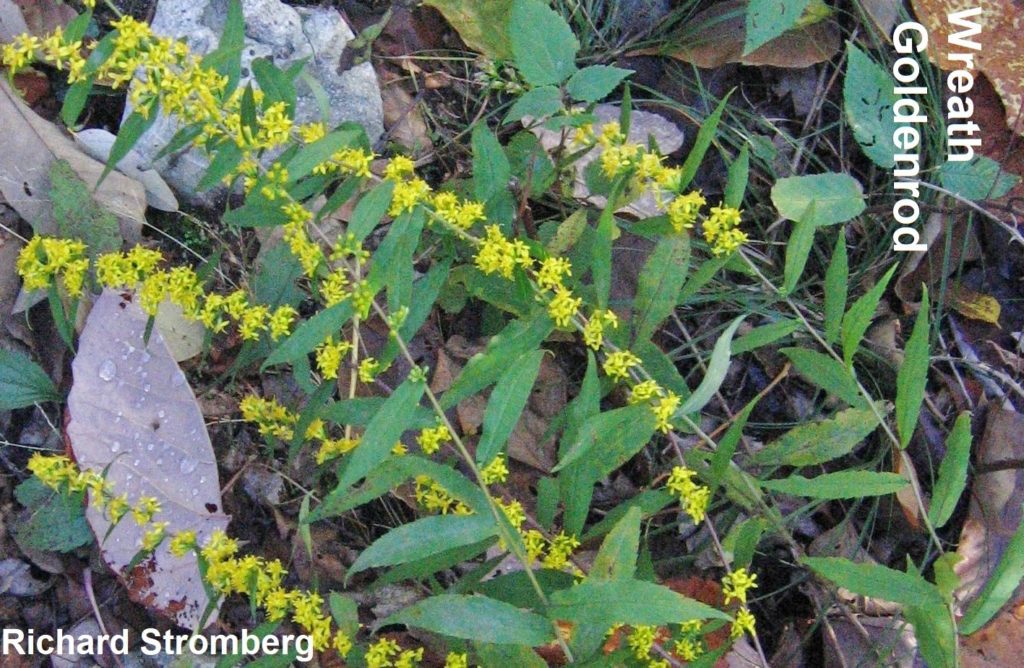 Several species are in the group with straight clusters at the top of the plant with flowers all around the stem. Hairy Goldenrod (S. hispida) has densely hairy leaves and stems. S. bicolor is similar to S. hispida except the rays are white (disk flowers still yellow, hence bicolor), and is cleverly called Silverrod. Stout Goldenrod (S. squarrosa) is easily distinguished from the others in this group, not so much because of its stout stem, but because the tips of the bracts under each flower head have spreading tips. It grows in the mountains and is widespread but infrequent.

Showy Goldenrod (S. speciosa) has large, egg-shaped, finely toothed, lower leaves, gradually reducing in size up the stem. Its flower cluster is usually large and branching, but not as wide nor curving as the first group. Downy Goldenrod (S. puberula) and Erect Goldenrod (S. erecta) are similar. Downy’s stem is minutely hairy while Erect’s is smooth. To be sure look at the bracts under the flower heads: Downy’s are narrow; Erect’s are broad and blunt. Rand’s Goldenrod is uncommon. It only grows in crevices on open rock ledges like Stonyman, Hawksbill, Bearfence, Crescent Rock and Old Rag in Shenandoah National Park. Its lower leaves taper to the stalk. The leaves become smaller up the stem.

Editor’s Note: This article first appeared in the Autumn, 2020 edition of The Leaflet, the newsletter of the Piedmont Chapter of the VNPS.