Why is using a plant’s scientific name important? Especially when common (vernacular) plant names can give you so much more information about the thought process and cultural beliefs of the people that named the plants. The use of vernacular in plant naming is a time-honored tradition that should never be thrown out because of what the name tells us about culture, ethnicity, the plants traditional medical usage, and other important factors that reach well beyond the realm of materialism and science. This is when plant naming becomes fun!

But what about those times when you are moving from the West Coast to the East Coast, as I have done, and the common name becomes an annoying source of confusion? In the wildflower identification class that I attended, I listened to the story of how the plant species Caltha palustris, family Ranunculaceae (commonly called the Marsh Marigold here on the eastern U.S. coast), has 90 different British common names, 40 German, and 60 French names in vernacular! Of course, I happened to know that California named theirs White Marsh Marigold. Yep, there goes my home state, always trying to be different. 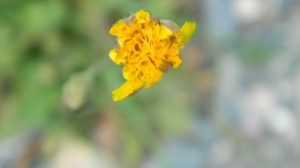 Now we are on to what Shakespeare meant when he said, “What’s in a name? That which we call a Rose by any other name would smell just as sweet.” So, it is time to keep things smelling sweet by using a scientific name for our plants in discussion, and for ease of translation – and yes that means British, German, French and ― well ― Californian.

Let us start with the group of plants that everyone calls a dandelion regardless of genus or species. The reason for this mistake is because they belong to a family. The family is called Asteraceae, named for the word ‘aster,’ meaning ‘star,’ describing the star shaped flowers in the composite flower head disk in the form of capitula surrounded by involucral bracts.

They are all similar with most all of these same characteristics and are within the same family. but are actually of different genus and species. When people are looking at these various plants, I have heard them make comments such as: “You don’t need to tell me what that one is – I know a dandelion when I see one. That one is some kind of dandelion. It has flowers up and down its stem, must have received some fertilizer; those things are weeds so of course they become mutants.” – As he stood looking at a Golden thistle (Scolymus hispanicus).

and 2) “Oh look, that dandelion’s lost most of its flowers and some of its leaves – good riddance,” he said, as he stood looking at a Rush Skeleton Weed (Chandrilla Juncea L.). 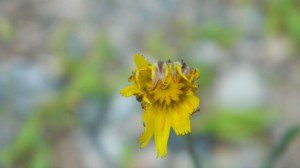 False and common often confused, this is false, “Hypochaeris radicata)

The plant that most everyone was calling a dandelion is called a False Dandelion, or Cat’s Ears, (Hypochaeris radicata), Aster Family. I found the poor maligned plant photographed on p.49 of my trusty old ‘Household Uses for Baking Soda’ book under the allergens section. It was debuting with lobed leaves even though this plant does not commonly produce allergies.

The difference between the False, or Cat’s ears, dandelion and the Common dandelion is that the False has hairy lobed leaves, resembling a cat’s ears, inside a basal rosette; otherwise it pretty much looks the same and has the same traditional medicinal uses as the common dandelion, and is edible. By edible, I mean that it is sold in the food markets. Oh, O.K. make that the California markets.

Although there are many look-alikes, here are the names of some of the other species that are similar: Bristly ox-tongue, (Picris echiodes), Meadow Hawkweed, (Hieracium cuespitosum), Carolina False Dandelion, (Pyrrhopappus carolinianus), Smooth Hawksbeard, (Crepis Virens L. Lapsona cappillaris), Rush Skeleton Weed,( Chondrilla juncea L. ‘Choju’), and of course the native Dwarf Dandelion, (Krigia virginica )―now that given name was just plain mean. 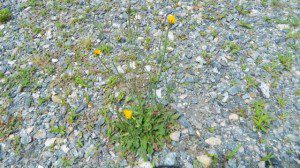 false dandelion is found along roadsides and in disturbed areas

Now, before you run away, consider this – all plants have a scientific name that includes first the Genus, then the Specific Epithet (what most of us simple folk like to call the species). Then after that you might see an L. that indicates the species authority – the know it all – someone for instance like Linnaeus who did not believe that plants could be carnivorous and eat animals. Well they showed him didn’t they? That pitcher really bogged (a little plant humor).

So, right now will the real dandelion please stand up? It is Common Dandelion, (Taraxacum Officinale), Aster Family. You will note that this plant has the Officinale stamp on it – that means it has the official medical status. This plant, while considered a weed by many, just happens to be an important edible plant for various vitamins, minerals, and medical uses.

While the False Dandelions shares these same vitamins and minerals and medicinal value, it is a little too hairy for my taste. So, will you join me in my crusade for the use of scientific names while we are learning together? We start by learning the Family characteristics, then the Genus then the Specific Epithet. Things may become a little easier while discussing plant species by using the scientific nomenclature.

Although I still have something to say on it.

And he said: “Son, this world is rough and if a man’s gonna make it, he’s gotta be tough,
and I knew I wouldn’t be there to help ya along.
So I give ya that name and I said goodbye.
I knew you’d have to get tough or die
and it’s the name that helped to make you strong.
Now you just fought one h— of a fight and I know you hate me, and you got the right
to k— me now and I wouldn’t blame you if you do.
But ya ought to thank me, before I die, for the gravel in ya guts and the spit in ya eye
cause I’m the son-of-a b—- that named you Sue.”