In a perfect combination rare plants and plant people came together on last month’s VNPS extended field trip to West Virginia. The “flower per hour” crowd enjoyed perfect weather and were very happy taking time to get to know the plants and watch for pollinators, reported Sally Anderson, who was on the trip, and has kindly shared her observations and photos here. “I think they saw more new plants and more different habitats than they expected.” 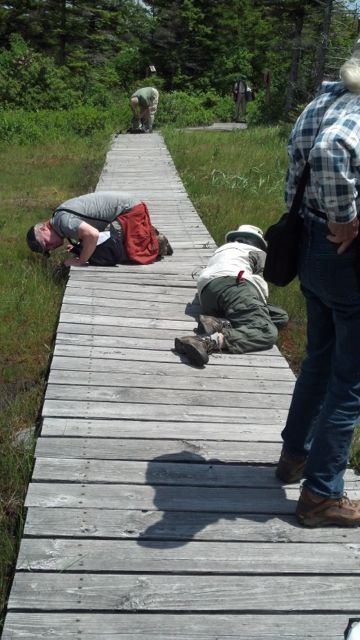 The week long trip covered the Cranberry Glades Botanical Area, Canaan Valley, Blackwater Falls, and Dolly Sods, each a place of outstanding biodiversity and beauty. In this photo they are getting close to the small plants on the Northland Loop Boardwalk at Dolly Sods, looking at roundleaf sundew and other bog plants. 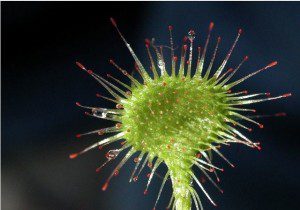 One of the stops, Blister Swamp, is an interesting wetland that includes a circumneutral area with masses of Polmonium vanbruntiae, or Appalachian Jacob’s ladder, a G3 species. There Baltimore checkers, pink lined sulphurs, and other butterflies hovered in abundance. In the acidic part of the wetland, the sphagnum moss  held Drossera rotundifolia (round-leaved sundew) and other plants of acid wetlands. 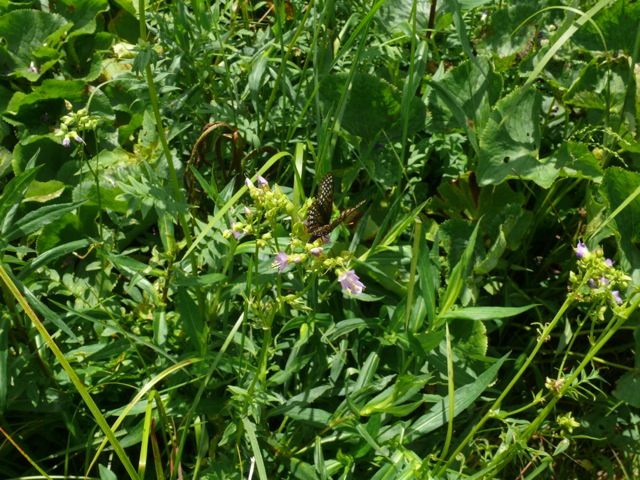 Blister Swamp and the headwaters of Abe’s Run in Canaan Valley State Park have very unusual habitats called circumneutral swamps, highly specialized wetland habitats that support a unique, nutrient-demanding flora. They share a suite of plants that include a couple of G3 species like Glade spurge, (Euphorbia purpurea), found in Virginia only at Pinnacle Natural Area Preserve, and an upright Jacob’s ladder, (Polemonium vanbruntiae), which is not found at all in Virginia; as well as a native alder-leaved buckthorn, several sedges, and wetland grasses and willows.

G3 plants are considered vulnerable, or at moderate risk of extinction due to a restricted range, few populations, recent declines, or threats of various kinds.

Editor’s note – The Nature Conservancy developed a system for ranking rare, threatened, and endangered plants. ‘G’ indicates that the threat is on a Global level. Numbers or letters following the G show how imperiled the plant is considered. The system is now maintained by NatureServe in cooperation with Heritage Programs or Conservation Data Centers (CDCs) in all 50 states, in four Canadian provinces, and in 13 Latin American countries. The NatureServe page showing the rankings and their definitions was down for maintenance at the time of this posting, but the Oregon Biodiversity Information Center shows them here: Rare Species Ranking Definitions

The globally rare (G1) plant called running buffalo clover, (Trifolium stolonifera) was found at Fernow Experimental Forest. This clover has an interesting history: it originally spread in response to the migration of eastern bison, and now is often found in disturbed sites. It looks just like clover, except it has no markings on the leaves. 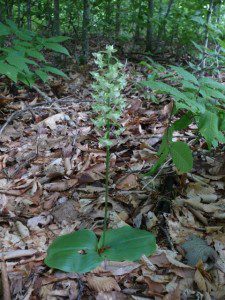 Naturally they were thrilled to see about ten species of orchids, most of them in bloom, including a large, round-leaved orchid (Platantherea orbiculata).

VNPS sponsors these extended overnight field trips twice a year, and members have priority for the limited spaces. Our fundraising this year will go to helping to locate and preserve the G1,2, and 3 plants in Virginia. Join VNPS today, get priority on field trips, and give us a hand with those imperiled plants!

As told by Sally Anderson,
VNPS Past President and
Shenandoah Chapter President
to Sue Dingwell 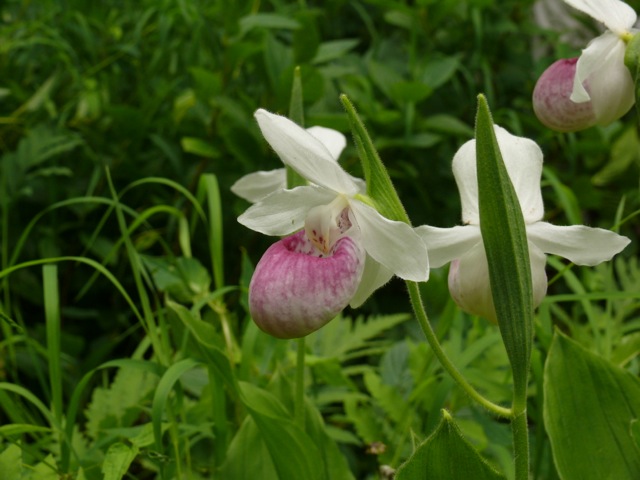