Many are the pleasures of a stroll into shady woods or floriferous meadows on a fair summer’s day.  Exuberant spring is spent and plants still verdant and youthful now assume attitudes more calm and serene. But when you go out to walk with a Botanical Bunch, you can forget serenity. What you get is a kind of jolly feeding frenzy. This state of heightened awareness is based not on the presence food, of course, but on the details of plant architecture. And what, after all, could be more interesting and revelatory than the way a plant is put together? Exactly! So it’s a congenial and collaborative kind of frenzy, but –  good to know before you go. 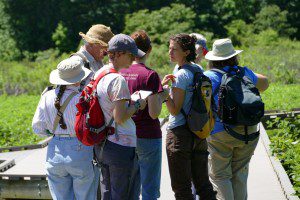 Look out! A Botanical feeding frenzy!

A little group at Huntley Meadows recently was not yet much past the Visitor’s Center when a lengthy debate ensued over whether it was Sweet Cicely, (Osmorhiza claytoni), or Aniseroot, (Osmorhiza longistylis), that we were looking at. The leaves and flowers of these two natives are almost identical to the casual glance.  But for the discerning detective, subtle differences are apparent. Sometimes. The definitive difference is in style size. For O claytoni,  the styles  are shorter than petals and for O. longistylis, the styles are longer than petals; note the clue in its botanical name.  However, since no flowers were present, the score was still tied. 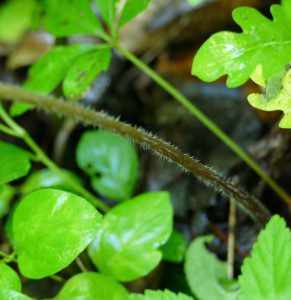 Further examination of the venerable Newcomb’s revealed that the root of O. clayoni is merely aromatic, while the root of O. longistylis smells like anise. Prohibited from digging up the plants in question,  noses could not be put to the test. Stem characteristics proved less than helpful as well; stems of Sweet Cicely are hairy, stems of Aniseroot are ‘nearly’ smooth. But they can be hairy sometimes.  Thus, at a draw until further information could be obtained from the specimens, the finer points continued to be discussed as we walked along. 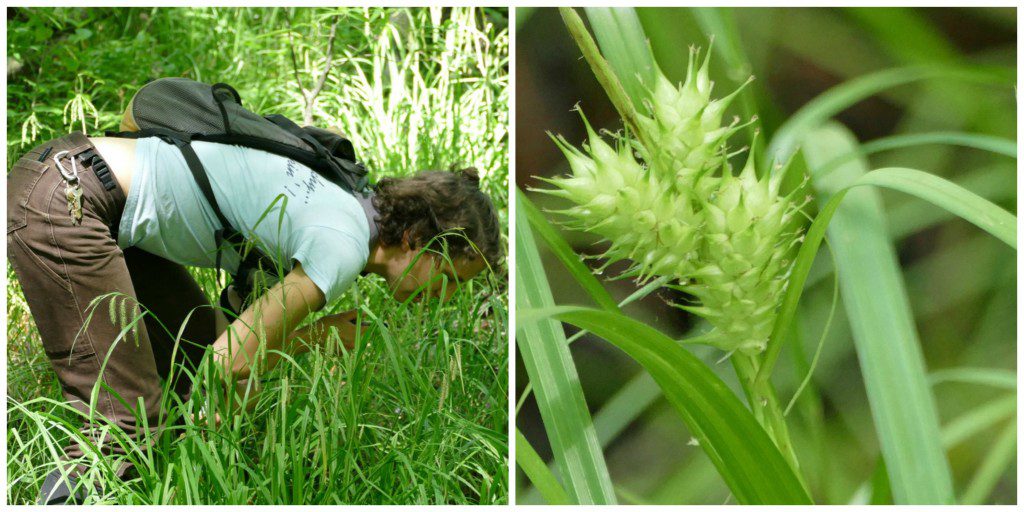 Alex gets down to make the determination! Yes, Carex lupulina, Hop Sedge

The great thing about walking out with a group of experienced plant people is that each person has their own specialities and passions – leading to the dissemination of knowledge that is perhaps not readily available – at least not without extensive research. It’s a fountain of real-time information that tends to stick in the brain because it’s being applied to a real plant right in front of you.

After the Osmorhizas, collective ID knowledge proved equal to all challenges. Wavy Starburst Moss; the yellow dandelion-like flowers of Rattlesnake Plantain; Enchanter’s Nightshade; Summer Bluets, those relatives of the diminutive Quakers Ladies;  Leersia; numerous Poacea species; these were just a few of the plants whose architecture was known by some and shared with all, proof of the efficacy of collaborative learning. 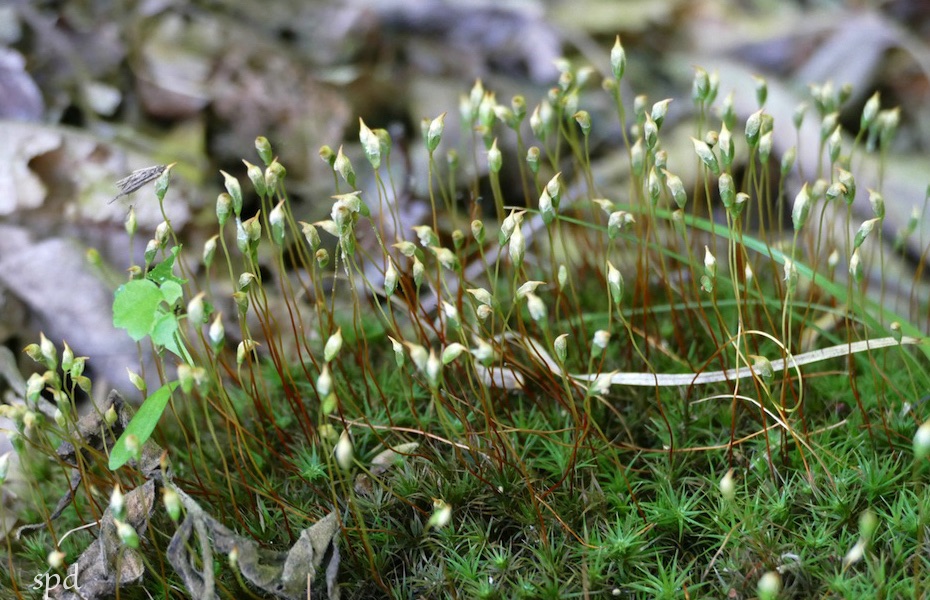 Who wouldn’t want to be able to recognize this moss by name? Wavy Starburst Moss! Atrichum altecristatum

But perhaps the most delightful discovery of the day, (please wait for slow-to-load-photo!)  was the identities of three young people working for Huntley this summer: Alex Schiavoni, an intern supported by Friends of Huntley; Jennah McDonald, an apprentice to David Lawlor, the Park’s Resource Manager; and Tiffanie Pirault, another Huntley intern who is being sponsored by the VNPS Potowmack Chapter. These enthusiastic budding botanists were  perfectly charming additions to the group; attentive, inquisitive and all making recordings of their learning that day. Hope for the future! 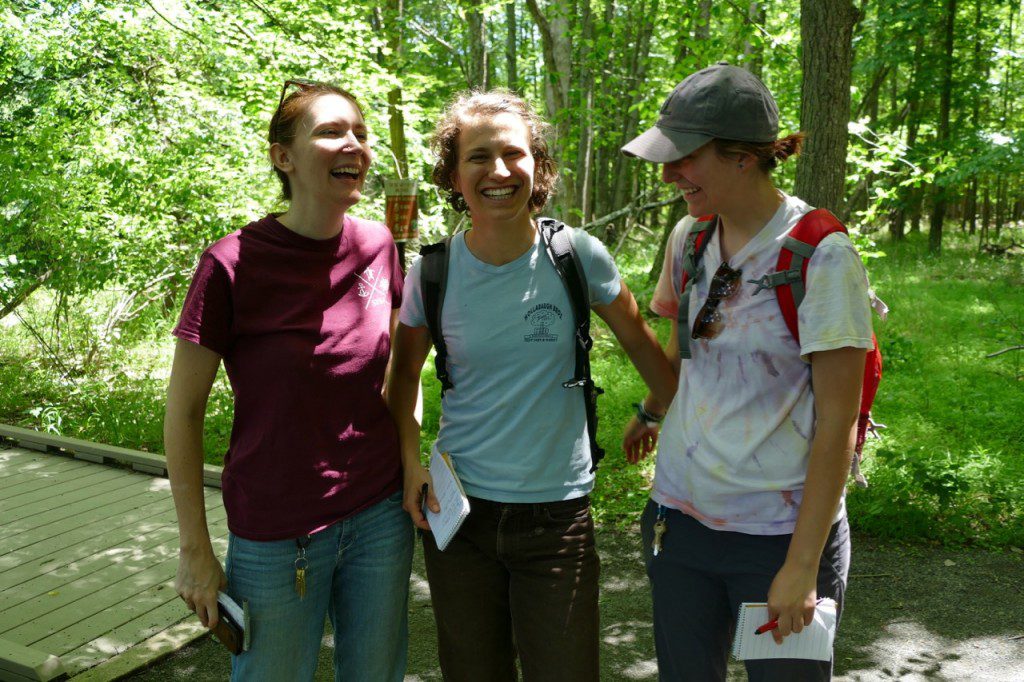 Jennah McDonald, Alex Schiavoni, and Tiffanie Pirault; all working at Huntley this summer!