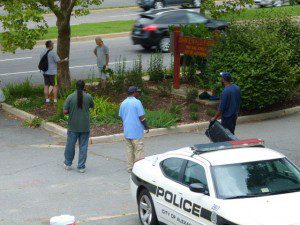 Citizens participating in a clean-up day at Ewald Park in Alexandria.

Last Saturday five concerned groups joined forces to show their appreciation for a small park in the city of Alexandria, a park where the biggest shade trees are in danger of disappearing. VNPS members were joined by Tree Stewards, Master Naturalists, members of the local Gladiators basketball team, the West Alexandria Rotary Club, and the Wakefield Tarleton Civic Association, whose neighborhood borders the park, in an effort to clean up, prune, weed, and let local officials know that they appreciate the shade trees. 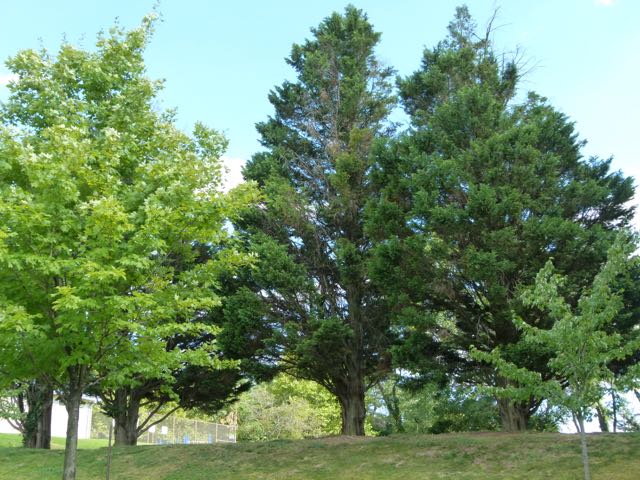 The evergreen juniper trees, (sometimes known as eastern red cedar), on the bank, as well as the deciduous shade tree in the foreground, are slated to come down. Their value to the park is obvious.

Ewald Park, on Duke Street several miles west of the Old Town area, is in line for some major and long-awaited improvements, including the removal of an old, small, public pool closed for many years and using up valuable space. But the plans also call for re-grading a bank sitting underneath four stately native juniper trees, (Juniperus virginiana). These trees not only provide a lot of shade, but also form an effective buffer between the park and the noise and commotion of traffic on Duke Street. A lovely stand of mature wax myrtle, (Morella cerifera), is also in danger, along with several non-native but substantial shade trees slated to be cut down near the parking area. 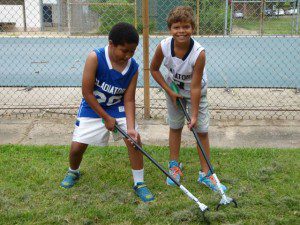 These members of the local Gladiators Basketball team practice at Ewald . They took a break from their trash removal duties to pose for the camera with their trash-sticker sticks.

To its credit, the city has recently inaugurated a comprehensive overall planning system for its parks in order to make sure that improvements happen in a thoughtful, time sensitive way. It has also gone to some trouble to make sure that citizens have an opportunity to make their voices heard during the planning process. Concerned VNPS members and Tree Stewards met with city officials recently to discuss their objections to removing the shade trees and have opened a dialog that seems to have room for negotiation.

A lot of attention is being focused on Urban trees everywhere these days. A spotlight on their benefits is front and center in local papers and on social media, not only in the U.S., but also world-wide. Look at headlines appearing this week;  just a small sample of recent articles that cover several key issues related to Urban trees:

Living Near Trees Has Health Benefits

Clearly trees are valuable resources. It makes sense to preserve them and to plan for their replacements as they age, not to cut them down just when they could be providing maximum benefits for the foreseeable future.

The group gathered in Ewald Park last Saturday were united in their belief that the shade trees should stay. One  mother told us that the cool shade under the junipers was her family’s favorite place to picnic on a hot summer day. “Please don’t let them cut our trees,” she said.

A biology teacher, the Gladiator’s coach, and three members of the West Alexandria Rotary Club all want the trees to stay!

Well, when people come together to save trees, maybe the people can make a difference!