A new non-native fungus and the beetle that carries it may soon severely impact sassafras, spicebush, and most other members of the Laurel family in the United States. Sadly, since these are the main host plants of the spicebush swallowtail butterfly, which is now common throughout most of the Eastern U.S., it too is at risk of becoming much more infrequent in most of its range.

The spicebush swallowtail butterfly (Papilio troilus), which at this time is common throughout Virginia, is a large and handsome swallowtail with a wingspan of 3.8-4.8 inches. Viewed from above, the forewings are black; the hindwings are washed with light blue. The underside of the hindwings is also very dark, with two rows of bright orange spots, the rows separated by light splotches of powdery blue. 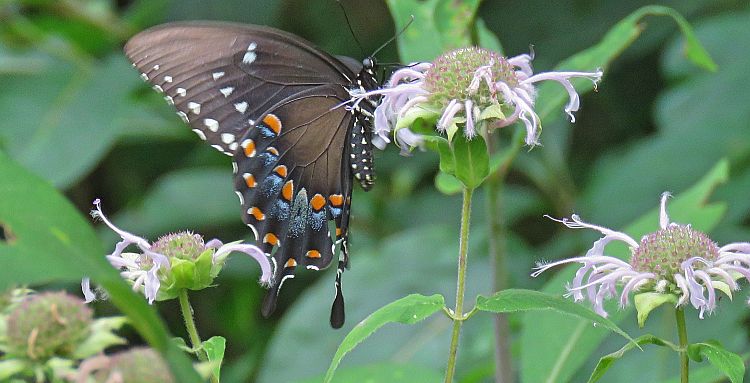 The ranges of both the butterfly and its two most wide-spread host plants, sassafras and spicebush, roughly coincide, extending throughout the Eastern U.S. except Maine and including the mid-West as far as eastern Texas and north into Iowa and Michigan.

One of the most interesting aspects of the butterfly is its various defense strategies. The adult is a mimic of the toxic pipevine swallowtail while the caterpillar has a range of defenses. The caterpillar makes a shelter by folding a leaf over, spinning silk to stitch the edges of the leaf together. It hides in this shelter during the day and to molt, emerging to eat at night. It also sports something of a disguise. The small, early instar larvae resemble bird excrement—brown with white markings suggesting the uric acid deposits on bird droppings. The mature caterpillar is green with bulging false eyes, looking a bit like a small green snake or frog. In addition, like all swallowtails, the butterfly has an osmeterium—a small, forked projection that it keeps obscured within the body most of the time, but if threatened by some insects, it can raise the osmeterium and spray the threatening insect with a foul smelling substance. 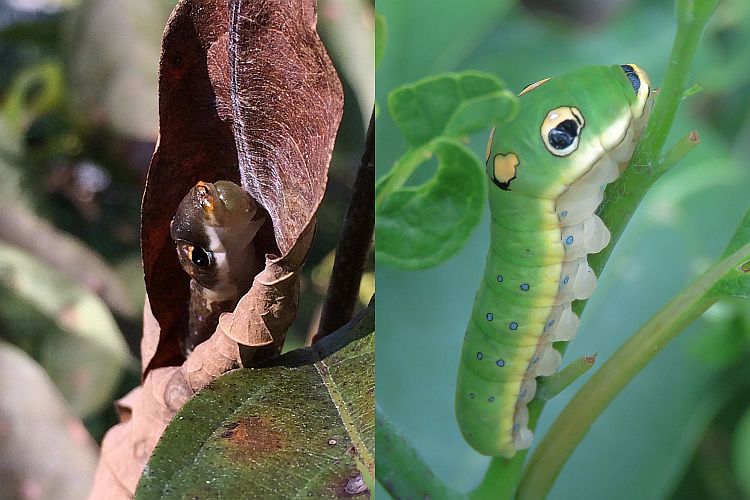 In Virginia, the butterfly has four host plants, all in the laurel family (Lauraceae): sassafras (Sassafras albidum), spicebush (Lindera benzoin), swamp bay (Persea palustris)* and pondspice (Litsea aestivalis), but the latter two are limited to a small corner of Southeast Virginia. In the rest of the state, sassafras and spicebush are the only hosts.

Both sassafras and spicebush are dioecious with male and female flowers on separate plants. The spidery flowers have no petals, only yellow sepals, pistils and stamens, but these are effective in attracting various insects. Both sassafras and spicebush have leaves and twigs that give off a spicy fragrance when crushed. Like the avocado, which is in the same family, both have fruits with high oil content and a single large seed.

Sassafras (Sassafras albidum) is a tree growing 20 to 60 feet tall and sporting three different leaf shapes: a simple oval, a mitten with one thumb and a two-thumb mitten. In the fall, leaves turn a variety of colors including yellow, orange, pink and red, while female trees sport handsome clusters of berries born on colorful red stalks shaped something like golf tees. Various medicines were made from the tree by both the Indians and early settlers, and sassafras was an important early export to Europe where it was viewed as a miracle cure-all. More recently sassafras root oil was the main flavoring in root beer until the 1960s when safrole, a component of the oil, was labeled a carcinogen by the FDA. Happily, the leaves contain very little safrole. Chewing on a leaf stem has long been a spicy, root-beer-flavored treat in our family, a practice we passed on to our children and which their children now enjoy; and the ground-up leaves, which have a mucilaginous quality, continue to be used as the thickener for gumbo. 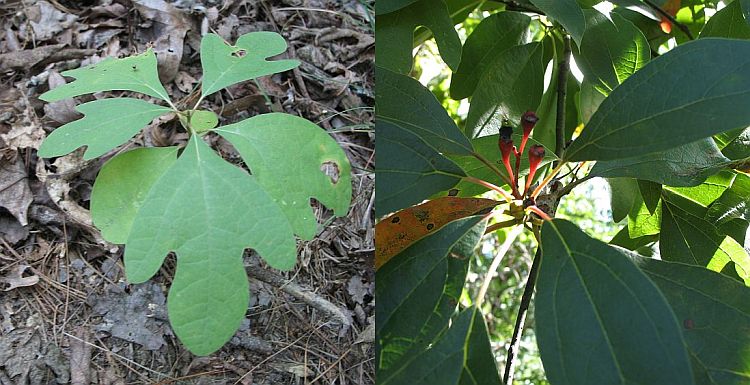 Spicebush (Lindera benzoin), the butterfly’s second caterpillar host plant that is wide-spread in Virginia, blooms in early spring before the leaves are out. In the fall the leaves turn bright yellow before falling off and the female shrubs have bright red, ovate berries that are rich in oil, making them a nutritious food for migrating birds. During the American Revolution, colonists removed the seeds, dried the berries, and ground them to powder, which they used as a substitute for allspice. 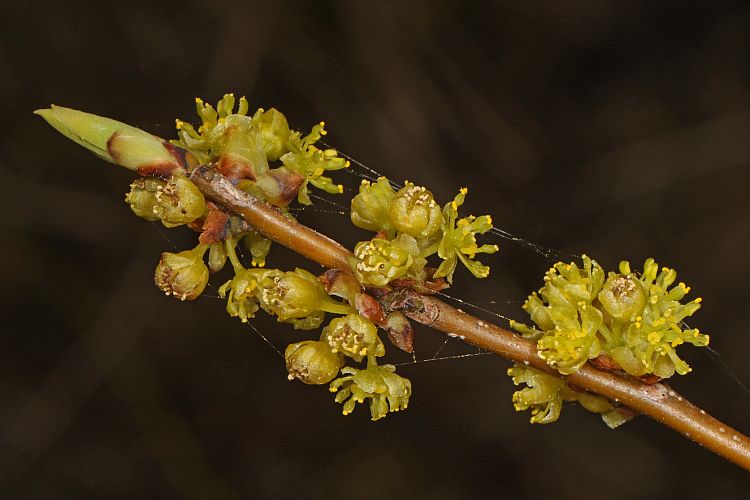 Today, many members of the Laurel family, including all of Virginia’s host species for the spicebush caterpillar, are under severe threat from laurel wilt disease. Laurel wilt disease is a vascular disease caused by the fungus, Raffaelea lauricola, that is carried to the host tree by the tiny, 2 mm long, redbay ambrosia beetle, Xleborus glabratus. Both fungus and beetle are from Asia and are believed to have come in on packing materials. The beetle first showed up in 2002 in Georgia, and since then has spread rapidly along with its associated fungus and the laurel wilt disease. It is believed that their rapid spread and extending range are probably mainly occurring through the transport of infested wood products such as firewood and mulch. Pockets of the disease are now known in much of the Southeast as far west as Texas and north to Tennessee and Kentucky. In September 2021, one diseased sassafras tree was discovered in Scott County in far southwestern Virginia. 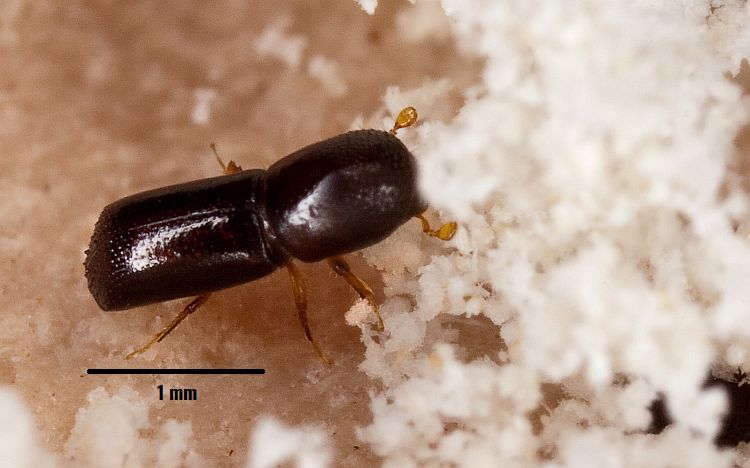 The redbay ambrosia beetle relies on the fungus as a food source. When it finds a healthy host, it bores into the wood of the tree, carrying the fungus, which then germinates and spreads systemically throughout the tree, clogging its water-conducting vascular system. As less water reaches the foliage, the leaves begin to wilt and discolor. Another typical symptom is dark vertical streaks in the sapwood running with the grain. Since sassafras is clonal, the disease can spread through the roots to new sassafras stems, even without the beetle. There are many other ambrosia beetles, both native and exotic, that depend on various symbiotic fungi for food. However, R. lauricola is unique in that it affects the host tree systemically and therefore is invariably fatal. And one beetle carrying the fungus is sufficient to kill a tree, typically within a few months or at times within a few weeks.

The beetle and disease have been limited to the southern U.S. Recent research suggests that the beetle has limited cold hardiness and may not do well at latitudes greater than 35 degrees N., at least in years when the winters are particularly cold. In most years the beetle can probably tolerate the winter weather in substantial parts of Virginia, and if global warming continues, the situation will undoubtedly get worse.

So far redbay ambrosia beetles in the U. S. that have been tested for their genetic characteristics appear to be clonal, suggesting that the introduction was through a single female. However, there is now evidence that other ambrosia beetles, which have symbiont relationships with other fungi that are not systemic, can incidentally pick up the wilt fungus when feeding on infected trees and then carry the fungus to other trees. Since these other ambrosia beetles are generalists that attack a range of tree families and are not specific to the Laurel family, it is unclear what future role these other beetles may play in spreading the disease to various woody species, not just spicebush and sassafras. Already, these other beetle species are suspected of carrying the wilt to avocado orchards in South Florida since very few redbay beetles have been found in wilt-infected avocado trees, which appear to be very poor reproductive hosts for them. The cold-hardiness of these other species of ambrosia beetle is also uncertain. More research is needed. 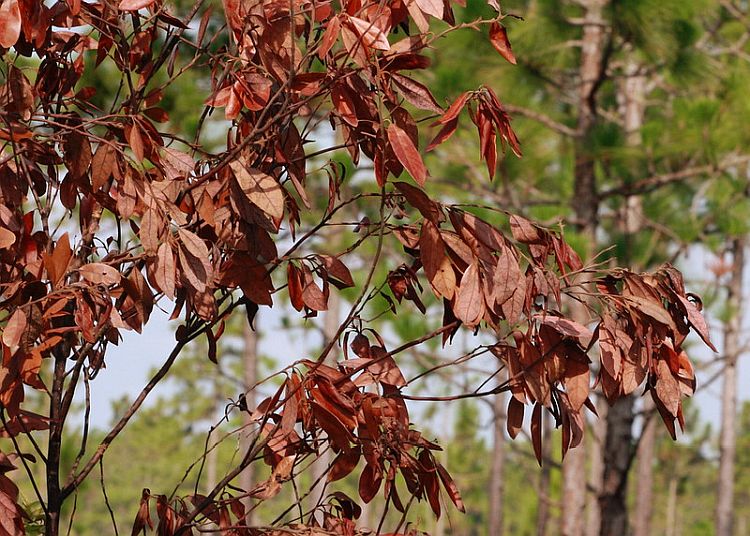 The largest diameter trees are preferred by the beetle and trees larger than 3” DBH are very rare in areas with more than 10 years of wilt. Much of the evidence so far that pertains to trees growing in natural settings focuses on redbay, Persea burbonia, which is an evergreen tree that grows best in coastal areas south of Virginia. But as the disease moves north and west, it is likely to exact a heavy toll on sassafras trees, with full-grown trees targeted first. In some areas of the Southeast Coastal Plain, large sassafras trees are already dying off. Although sassafras is less common than P. burbonia in this region, in areas where there are substantial stands near infested redbays, it is estimated that 80% of sassafras trees have been killed by laurel wilt, although seedling, saplings, and small trees of both redbay and sassafras continue to do fairly well where they aren’t heavily browsed by deer.

There is some reason to hope that spicebush may be less vulnerable than sassafras. First, it is a shrub and individual stems are relatively small and therefore less appealing to the beetle. In addition, spicebush stems have less α-copaene, the main volatile element that attracts the beetle to other Lauraceae. However, the disease is known to have spread to spicebush and spicebush is probably vulnerable when it grows near infested redbay or sassafras.

Management and Control Options are Limited

Management options are limited. Avoiding transporting firewood or other wood products from infested areas can slow the progress of the disease. Also, although the disease can persist for more than a year in standing dead trees, it appears to last only a few days in woodchips. Particularly valuable trees and shrubs, e.g., prized-specimen avocado trees, can be protected by root-flare injections of the fungicide propiconazole, but the usefulness of this treatment is limited since the tree takes up the chemical slowly and it is effective for only a few months. In greenhouse studies, chemical treatments with a soil drench or applied topically to branches or bark have been useful but are not practical for large trees. Good sanitation practices can also help, which may be feasible for avocado orchards, but are not practical for sassafras and spicebush growing wild in natural settings.

Currently the search continues for some sort of biological control, although nothing tried so far seems feasible under field conditions. However, Asian species of Lauraceae that co-evolved with the fungus and beetle show some resistance and may be useful in identifying resistance genes or in breeding hybrids.

* While the Flora of Virginia lists both swamp bay and redbay as alternative common names for Persea palustris, I will use the term “swamp bay” here since much of the research on laurel wilt disease has been at the University of Florida where researchers use the common name “redbay” to refer to a different species, Persea burbonia, also severely vulnerable to laurel wilt.