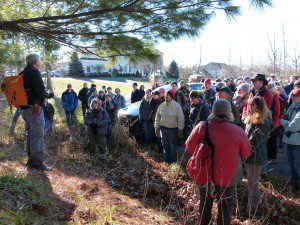 Rod Simmons explains what’s on the Wild Side.

Standing in a cul-de-sac of the development, where every lawn was manicured to within an inch of its struggling life, it was impossible not to think of the song. The crowd gathered for the Annual Solstice Walk on December 20 listened carefully to an explanation of what they were about to see ‘on the other side,’ where the Travilah Serpentine Barrens lay in wait. And once past the curtain of trees, the  contrast between the two worlds was both stark and wonderful. The Barrens revealed itself to be just as orderly, but ordered by a different set of rules. The question – framed by prejudices and preferences – of which was more beautiful, will have to be answered by the reader.

Serpentine habitats occur along the edges where plate tectonics have caused uplifting, often along linear zones indicating the margins of old continents. Soil in these places is shallow, nutrient poor, and chemically challenging for plants; these conditions give rise to unique species adapted to be slow-growing and tolerant of stress. The globally rare habitat preserved by Montgomery County at the Serpentine Barrens Conservation Park supports nearly two dozen rare, threatened, or watchlist plants. “Plants that live in unusual soils, such as those that are extremely low in essential nutrients, provide insight into the mechanisms of adaptation, natural selection, and endemism.” (American Journal of Botany, March, 2014) 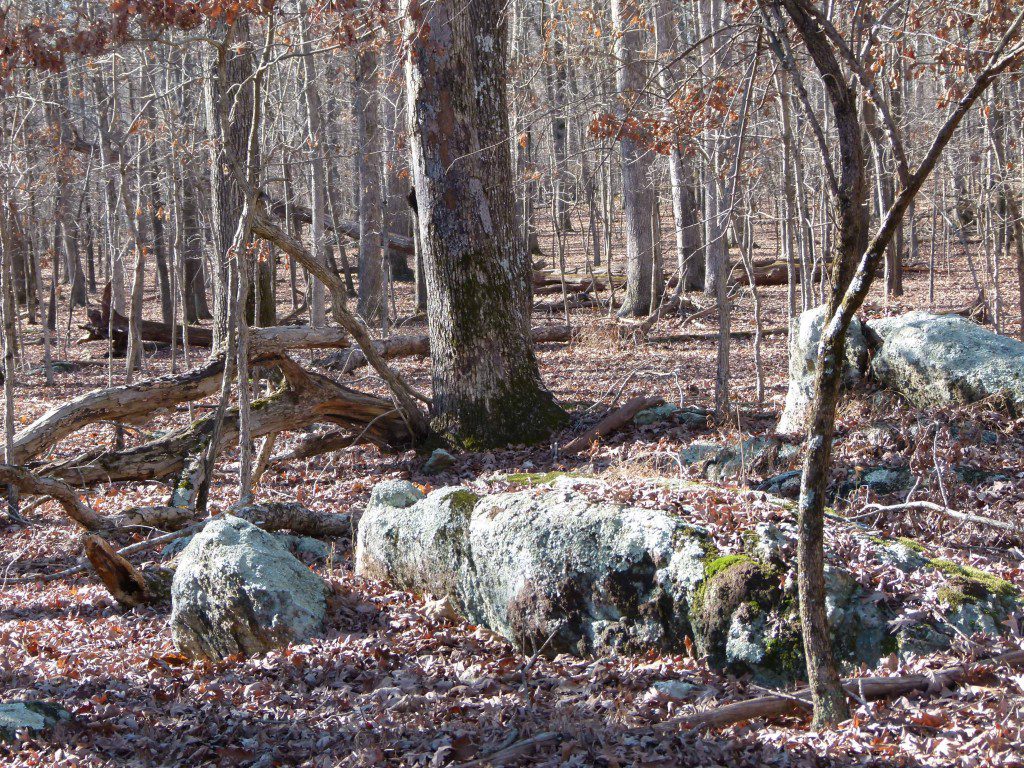 “This area is special,” said walk leader, Rod Simmons, “it’s not just a nice forest.” He expanded on that theme by remarking that there are some who arrive, see the smallish trees and the openness, and conclude that this is a young forest. But in fact it is an old growth forest, the trees are stunted by lack of nutrients; the openness is the natural look of a healthy forest. We don’t always understand what we see, which is one of the reasons the Societies sponsor walks like this one. “All parts of our landscape need to be preserved,” Rod noted. This notion heartily seconded by all. 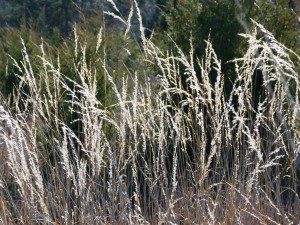 The group struck gold early on, encountering golden Indiangrass, (Sorghastrum nutans), in thick stands under the power line. Unfortunately, also under the power line, starting from dump hills where outside fill had been brought in, invasive non-native grasses and weeds were on the march. Without control, these will become dominant.

Short leaf pine, (Pinus echinata), and Virginia pine, (Pinus virginica), were the two most prolific evergreens. Short leaf pine can live for hundreds of years, Rod explained, and recovers well from fires; his preference would be to promote planting more of the shortleaf in place of white pine.  Leaves of shortleaf are longer than those of Virginia pine, twisted, slender and flexible; the fascicles hold leaves in twos or threes. Cones of the shortleaf are somewhat ovoid and nearly sessile. 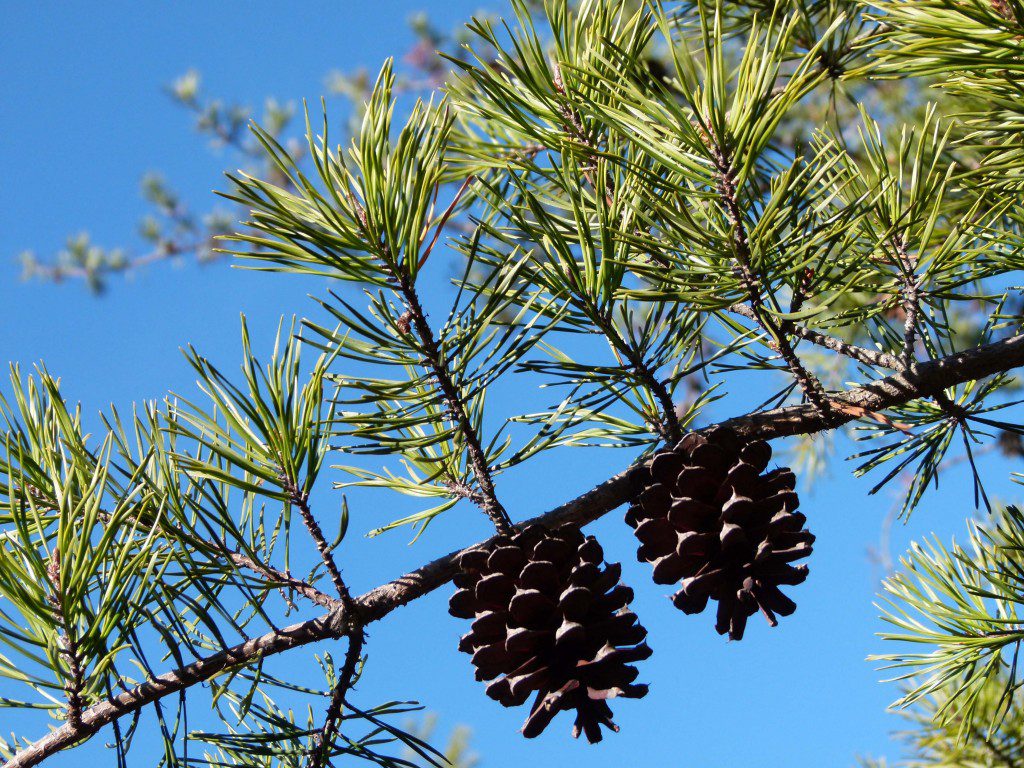 Oaks and hickories are the other two most prevalent trees at the Barrens.  Blackjack oaks, (Quercus marilandica), which like the acidic soil, were lining the edges of the forest, seeking as much sunlight as possible. 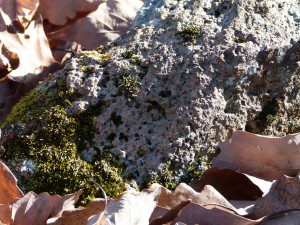 Serpentinite, a kind of soapstone, made a good foothold for mosses and lichens.

Serpentinite boulder outcroppings were also in evidence throughout the walk. Serpentinite is ultramafic rock derived from magnesium-rich silicate, and is a type of soapstone. On one stop, a small rock was broken open so participants could feel the silky talc composition which gives it the name.

Other discoveries included emergent spring beauty, (Claytonia virginica), which usually does lie in wait under the leaves at this time of year, no worries; and rue anemone, (Thalictrum thalictroides), and potato dandelion, (Krigia dandelion), which are a bit ahead of themselves. And many more – 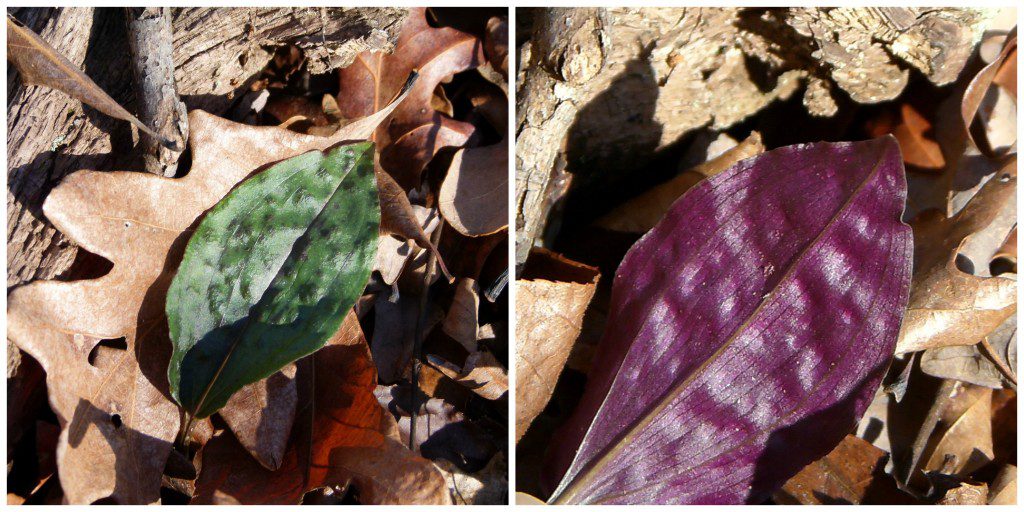 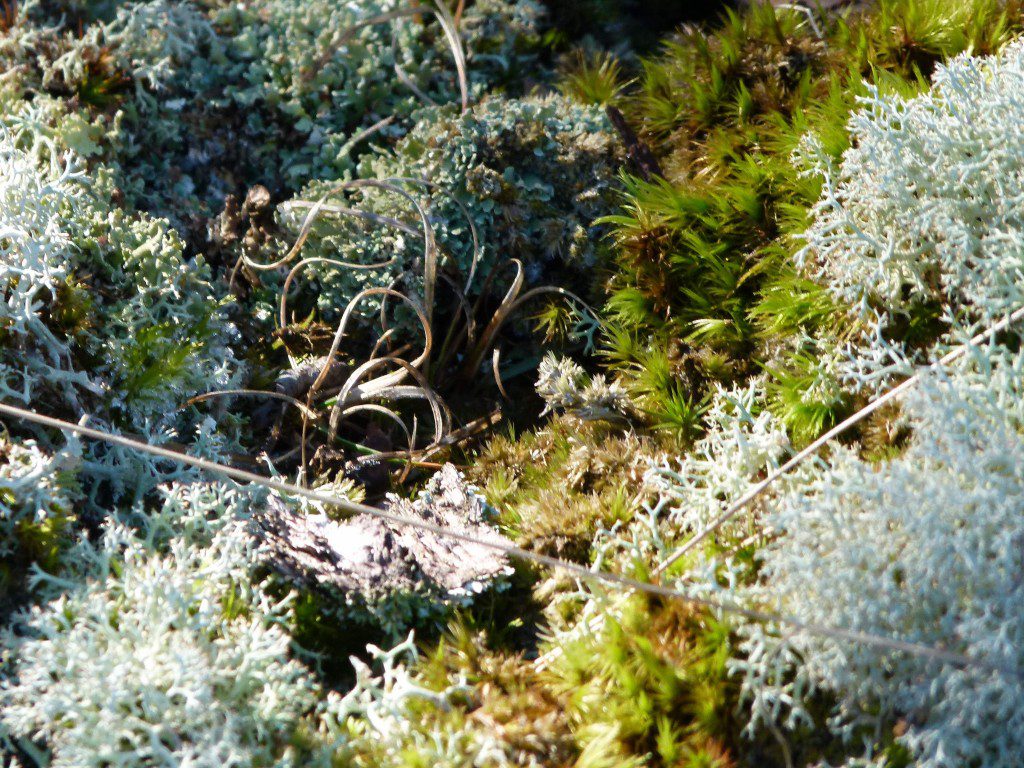 The richness of the day was enhanced not only by new learning and appreciation but also by the opportunity to talk with old friends, to make new ones, and to toast together the Spirit of the Green Man.

The diverse and unique complexity of the natural community at the Travilah Barrens is a treasure deserving of preservation. As pressures mount for multi-use sports that would transform this spot into just another open area of trails, the importance of a wider appreciation of what is there becomes apparent. Thanks go to the sponsoring organizations, The Potowmack Chapter of the Virginia Native Plant Society, the Maryland Native Plant Society, and the Botanical Society of Washington for their ongoing efforts in this endeavor each year on the Solstice Walk, and throughout the year on many fronts.