Partridge-berry (Mitchella repens) is a handsome evergreen vine that creeps along the ground reaching only 2” high. Its long trailing stems can reach 12” long but it develops roots at nodes along the stem wherever it touches the ground, creating large dense colonies. Widespread across eastern North America, it ranges from Canada south to Florida and Texas. In Virginia, it occurs in every county and is commonly found in both dry and moist acidic forests, along stream banks and on hummocks in bottomland forests. 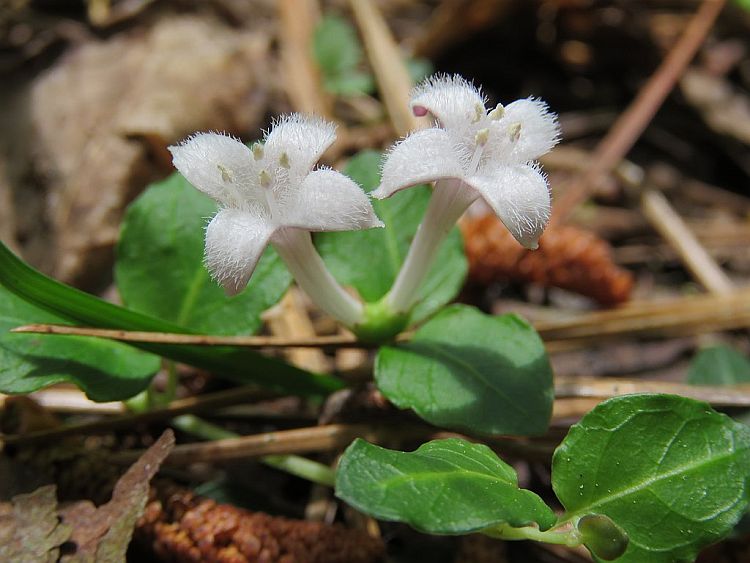 The small, ovate to nearly round leaves are glossy dark green and only ½“ long with smooth margins and a distinctive white to creamy midrib. They are arranged opposite each other along the stems forming an eye-catching pattern. In May and June, the small white fragrant tubular flowers open at the tips of stems. Each flower is only ½” across with four flaring lobes; the inside and edges of the lobes are fringed with fine white hairs giving the flowers a fuzzy look. These lovely flowers are “twinned” — occurring in pairs and are fused at the base and sharing a single calyx and ovary. Both flowers must both be pollinated in order to produce a single glossy red berry. 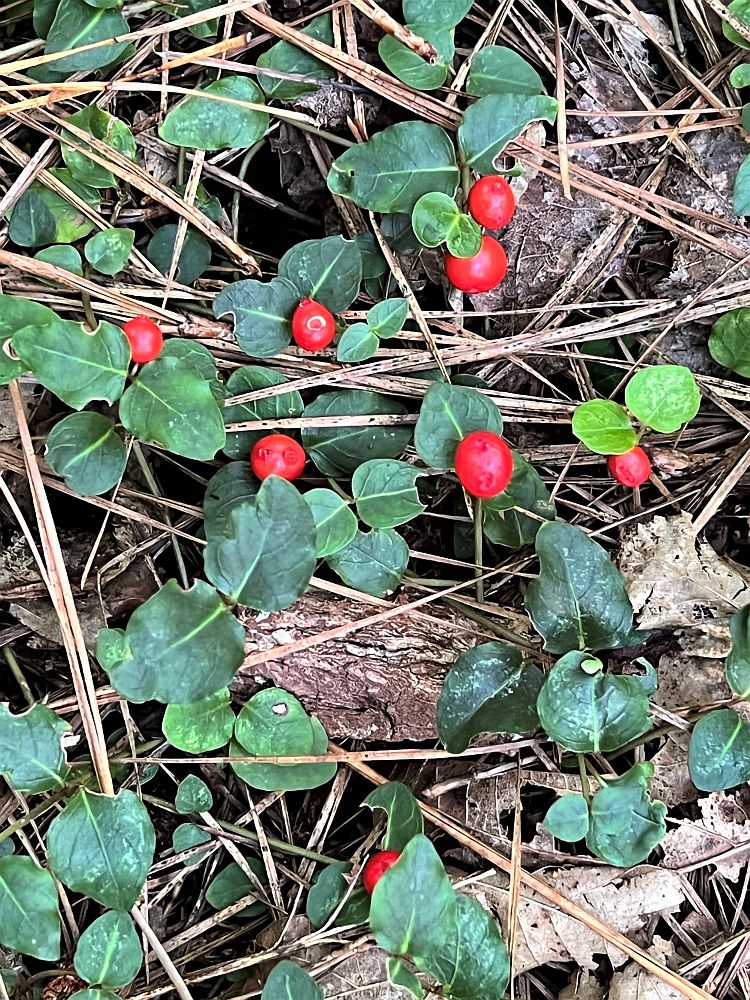 These attractive berries ripen in late summer and fall and often persist through the winter until spring. While not always abundant, they give a powerful punch of bright color in the depths of winter and are especially handsome nestled against the lustrous evergreen leaves. Interestingly, partridge-berry has two different types of flowers. The first type has a short pistil (the female reproductive structure) surrounded by long stamens (male reproductive parts), while the second type has a long pistil surrounded by short stamens. Bumblebees are the principal pollinator of partridge-berry and the two types of flowers ensure that partridge-berry is not self-pollinated. Both flowers must be pollinated to obtain the single berry. 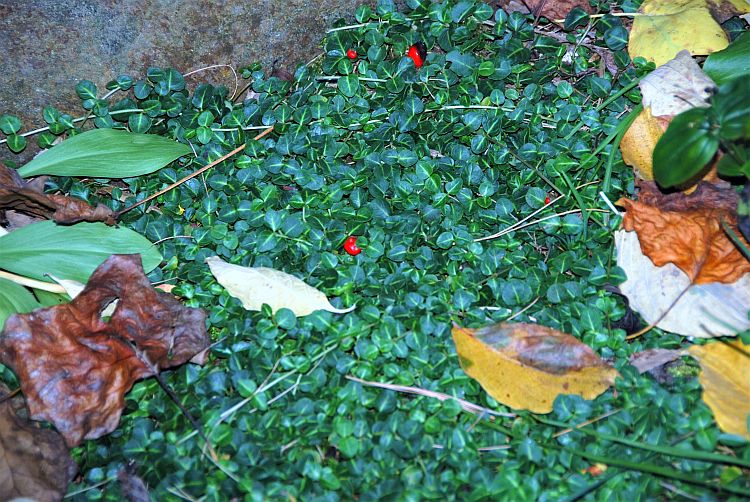 This diminutive groundcover has been admired and used for centuries. Accordingly it has over 30 common names, including: Twin Berry, Two-eyed Berry, and Oneberry. These refer to the fact that Partridge-berry bears a pair of fragrant, white flowers — twins that produce a single berry. If you look closely you can notice two bright red dimples on each berry (drupe) where the flowers were attached to the single ovary. You have probably already guessed from its common name that partridges and a variety of gamebirds such as Wild Turkeys, Bobwhite, Ruffed Grouse and the extinct passenger pigeon eat the fruit and disperse the seeds. Small mammals such as Red Fox, Chipmunks, Eastern Skunk, Raccoons, and White footed mice also eat the fruit. The glossy red berries (drupes) are rather bland and tasteless but with a hint of cranberry, and tend to persist through much of the winter, creating a feast for winter-weary eyes and for wildlife in late winter when other food is scarce.

Native Americans and early colonists used partridge-berry to treat a variety of ailments such as an aid for childbirth. Infusions made from the roots and stems were used to treat rheumatism, back pain, and dysentery. Today it is best enjoyed while walking through some of our woodlands or as a dainty groundcover in shady gardens. 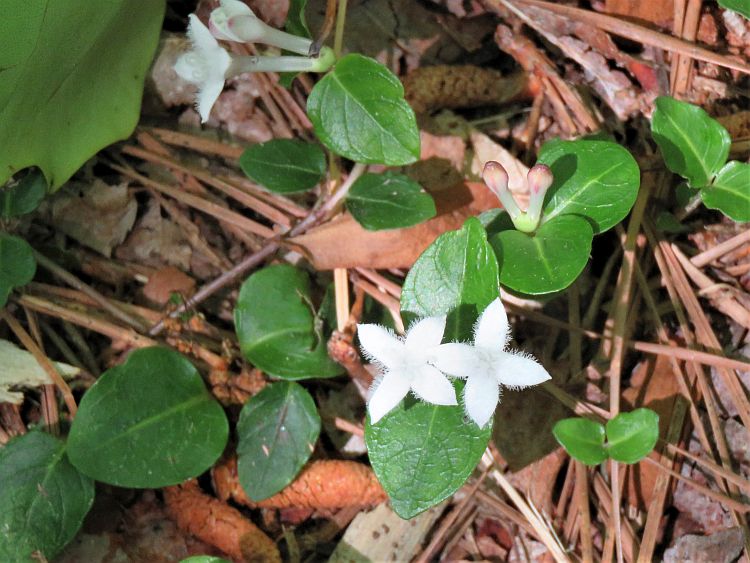 Partridge-berry is handsome throughout the year, with its glossy red fruit often persistent through the winter followed by its pristine white flowers in late spring. It is seldom bothered by pests and makes a delightful trouble-free low groundcover in in our gardens, preferring rich organic soils in dappled to heavy shade and acidic soils. Although it spreads fastest in rich organic soils, it tolerates dry, acidic soils and heavy shade. While slow to establish, it can eventually form a handsome dense creeping groundcover that can cover several yards in a woodland garden. Partridge-berry also makes excellent groundcover under shrubs and small trees, in rock gardens, around ponds, streambanks, and on hummocks in bottomland forests. Partridge-berries are difficult to grow from seed but are easy to divide or to root stem cuttings to increase plantings and often available for purchase in nurseries. (See the VNPS Native Plant Nursery List)

Partridge-berry, Mitchella repens, was named by Carl Linnaeus in honor of his friend, Dr. John Mitchell (1711-1768), an early physician and botanist from Lancaster, Virginia. This darling little evergreen groundcover has a long and illustrious history, as well as plenty of charm and adaptability.

Invite this dainty charmer into your woodland garden and be prepared to be enchanted throughout the year!

Partridge-berry was the Northern Neck Native Plant Society February 2022 Plant of the Month, and the VNPS 2012 Wildflower of the Year.