The old-age forest section of Chapman State Park is a fascinating and regionally unique meeting ground for plants with a primary range in the inner Piedmont and mountains and those of the Coastal Plain. This section extends from the low river terrace and extensive Water-willow Shrublands along the Potomac River to the marl cliffs and ravines near Glymont, and it will be focus of this year’s Winter Solstice Walk. Each year the Potowmack Chapter of the VNPS is a co-sponsor of this event, led by VNPS member Rod Simmons. For those unable to attend the event, here is Rod’s description of some of the highlights.

Most of the ravines and rolling valleys throughout the forested tract between Mount Aventine and Glymont comprise a globally rare natural community called Shell-Marl Ravine Forest, coined by Harvard botanist M.L. Fernald in the 1930s after discovering similar forest communities in the Virginia tidewater region to the south. 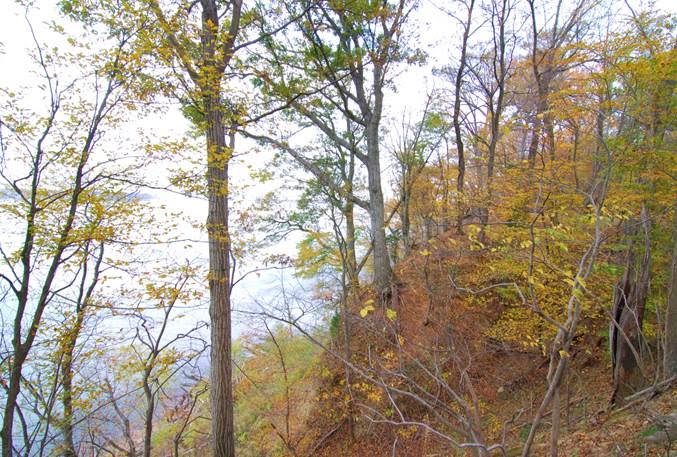 This community type occurs only on the Coastal Plain where river bluffs and deep ravines over millennia have exposed underlying calcareous and glauconitic marine sands and marl beds deposited during the Paleocene, Eocene, and Miocene epochs when the area was a shallow sea at the western edge of the Atlantic Ocean.  The Brightseat and Aquia Formations are the prominent underlying strata in this section of Chapman Forest.

The combination of deep ravines, calcareous soils, and close proximity to the Potomac River has produced a remarkable flora predominately composed of species typical of the inner piedmont and carbonate areas of the Appalachians that are otherwise rare to absent on the Coastal Plain, especially in association.  Chapman Forest is considered to be Maryland’s largest and finest example of this natural community type. 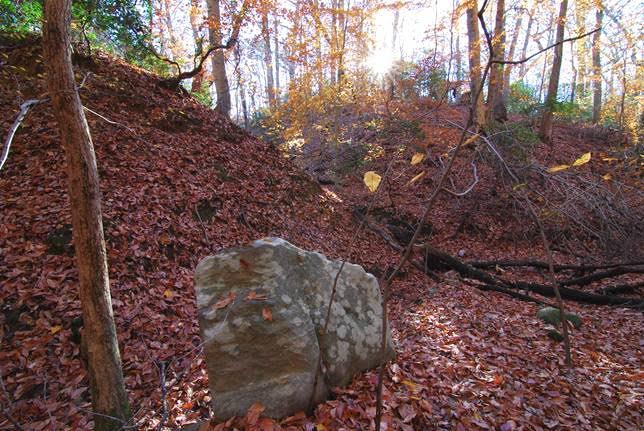 This geological relic measures 1.8 m wide and 1.5 m high!  Giant cobbles such as these are well distributed near the fall line of the region but are fairly rare, with the lens along Timber Branch at Ivy Hill Cemetery in the City of Alexandria, Virginia containing the largest known collection locally.  More information here: Geologic Atlas of the City of Alexandria, Virginia and Vicinity, Expanded Explanation of Plate 5. (https://www.alexandriava.gov/recreation/info/default.aspx?id=89974) 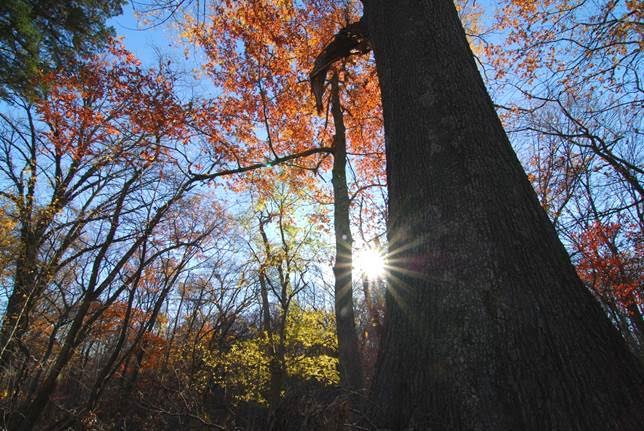 Cherrybark Oak (Pagoda Oak) is a massive, long-lived tree of bottomlands and mesic forests of the southeastern U.S. that reaches the northernmost limits of its range in the Coastal Plain of Maryland and vicinity.  This tree is not a component of Shell-Marl Ravine Forest, but is common and reaches great size at Chapman State Park on well-drained bottomlands and the coastal variant of Northern Coastal Plain / Piedmont Mesic Mixed Hardwood Forest that occurs above Shell-Marl Ravine Forest at the site. 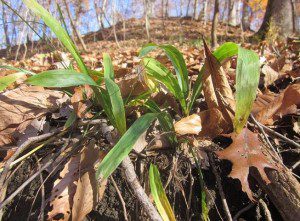 White Bear Sedge (Carex albursina), above, is yet another disjunct inhabitant of calcareous Shell-Marl Ravine Forest sections at Chapman State Park.  Moreover, southern Maryland is the only known area of the Atlantic Coastal Plain for this plant. If there’s time, we also hope to take a moment to measure a champion-sized Deam’s Oak at this section of the forest. 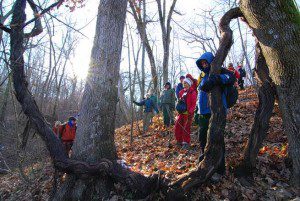 Here we have the December 15, 2013 Winter Solstice field trip participants also at Chapman Forest, experiencing first hand the impressive size of an ancient Winter Grape vine.  CBH is the Circumference at Breast Height.

The Winter Solstice Walk is a special event, open to all, and  celebrated in the spirit of the Green Man. If you are interested in attending this year, directions are here: Winter Solstice 2016. 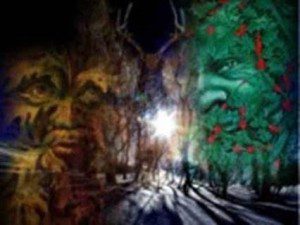 “There are mushrooms for a brain,

and something else, unnamed,

that sets the shallow winter sap upon its face

and grants the Green man motion

and binds him to the forest waste.”
– Ari Berk, Anatomies