Unlike many wildflowers that make a beautiful but brief spring appearance, the perennial Jack-in-the-pulpit (Arisaema triphyllum) appears later in April and continues to add interest to moist woodlands until late fall. The hooded inflorescence which resembles a pulpit (a spathe) has a “Jack” (a spadix) standing in the center as if delivering a sermon. Perhaps he’s preaching preservation—advising all visitors to protect our wildflowers, and not to pick, dig, step on, or otherwise disturb nature’s beauty. 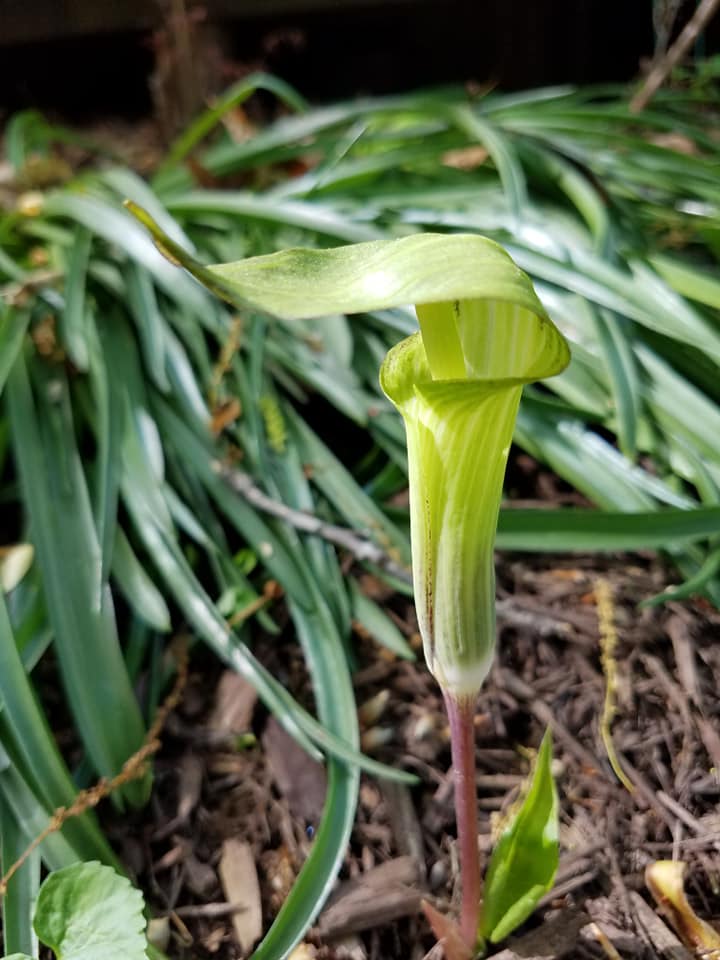 Jack-in–the-pulpit is found in the eastern half of the lower 48 states (except southern-most Florida) and into southern parts of the southeast Canadian provinces. This species is a member of the Arum Family (Araceae). In fact, Linnaeus assigned the binomium Arum triphyllum to this species in 1753. The current genus name is Arisaema which was assigned by the German botanist Carl Martius in 1831. The name is derived from the Greek aris for arum and haima for blood (some species have blood-red spots on vegetative parts or the blistering effects from handling the corm or berries). World-wide, there are 170-200 species in this genus, but only two species are native to the lower 48 states and to Virginia: A. triphyllum (referring to the three leaflets of the compound leaf) (Jack-in-the-pulpit) and A. dracontium (referring to the dragon’s tongue extended spadix tip) (Green Dragon). 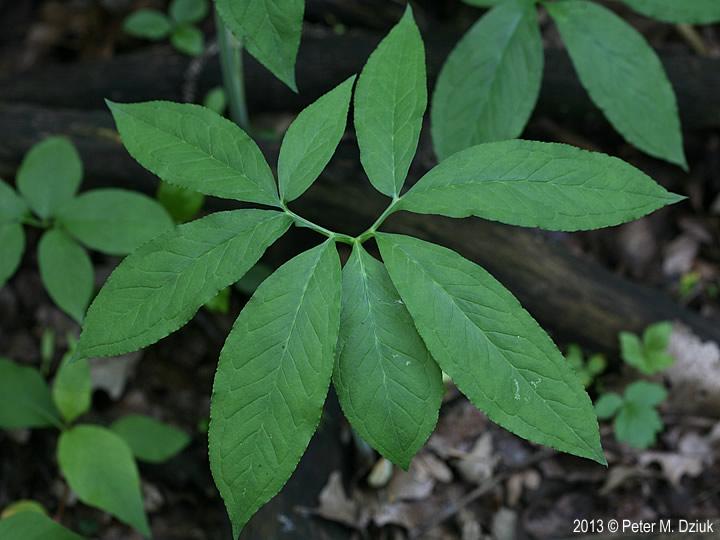 Other common names for Jack-in-the-pulpit are based on either the use of the corm as a “turnip” type vegetable and/or the intense burning produced by raw parts. These names include Indian turnip, marsh turnip, swamp turnip, wild turnip, dragon turnip, pepper root, wild pepper, and devil’s ear. 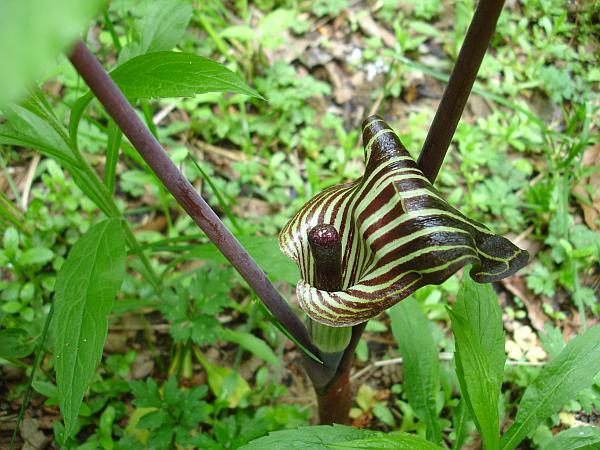 Jack-in-the-pulpits are perennials that develop from an underground storage stem or corm. The compound leaves with three leaflets (sometimes only one when young or up to five) on long petioles and the flower stalk or peduncle emerge from the corm. There are fibrous roots on the corm. Height can vary from 9-10″ up to 30″ or more. The actual flowers of the Jack-in-the-pulpit are nowhere to be seen by a casual viewer or even a potential pollinator. The minute yellow-green to purplish flowers are in the chamber formed by the spathe on the lower spadix. The hooded spathe is typically either maroon or green with white stripes.

If you examine a Jack spathe closely, you will notice an oily film on its surface. It will squeak when rubbed between your fingers. This oily surface will quickly send potential pollinators, such as mushroom gnats or thrips, sliding into the interior chamber. Once inside the chamber, if there are mature male flowers on the spadix, the surprised intruder will be dusted with pollen as it attempts to escape. There are four stamens for male flower but not sepals or petals. In the male inflorescence, there is a gap at the base of the spathe that does allow the pollinator to escape. Once the not-too-bright insect does escape, it is likely it will visit another Jack and experience another slippery trip into a chamber perhaps with mature female flowers, and hopefully pollination will be accomplished as it once again attempts to escape. The small female flowers each have a rounded ovary with a short style and a prominent stigma. In the female inflorescence, there is not a gap at the base of the spathe and therefore no escape! 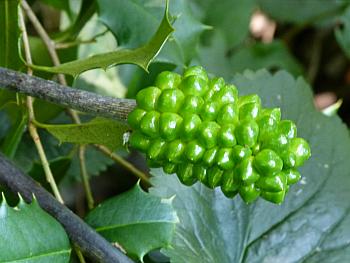 If a Jack has both male and female flowers, as a small percentage do, the male flowers will be located on the spadix above the female flowers and will mature before the female flowers, usually preventing self-pollination. Typically the plants do not set viable seed. The result of the pollinator’s elaborate ordeal is a tight cluster of showy green berries maturing to red berries by late summer. Birds, rodents, and other animals disperse the fruits with seeds. 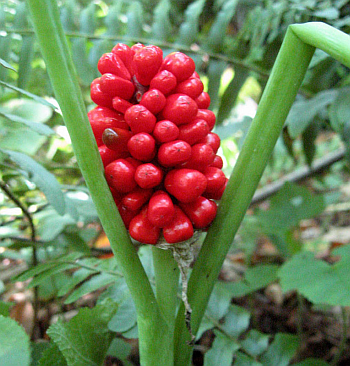 An interesting characteristic of Arisaema species including A. triphyllum and A. dracontium is that individual plants change sex depending on age or nutrients stored in the corm. Plants typically start out life as males and, when enough energy is stored in the corm, the plant will produce female flowers. The red berries of Jack-in-the-pulpit appear very tempting to a wild-food enthusiast, but BEWARE! All vegetative parts of the plant, including the well-developed underground stem called a corm as well as the berries, contain crystals of calcium oxalate. These crystals will cause a deep burning sensation if one nibbles on a raw corm or berry. The unwary “victim” will not soon forget the experience. Another common name for this plant is “memory root” based on the now less common practice of school boys (and probably girls too!) tricking each other into a bite of a corm which resembles a turnip. With boiling or drying, both the starchy corm and berries can be eaten. Both were popular with various Indian tribes.

In addition to edible uses of Jacks, there are a number of medicinal uses. The corms have been grated and boiled in milk and used to treat coughs and tuberculosis. Other uses of the corm are supposed remedies for stomach gas, asthma, and rheumatism. Other plant parts have been used as an expectorant, and to increase urine, as well as a skin irritant to cause blistering.

This spring enjoy the enchanting beauty of Jack-in-the-pulpit and Green Dragon. Jacks are more common than Green Dragons that typically grow in wetter habitats and bloom later in the spring. The three leaflets of Jacks may be mistaken for Poison Ivy, but are on an elongated petiole. Green Dragon has a whorl of 5-15 leaflets. Both species are well worth finding and photographing. 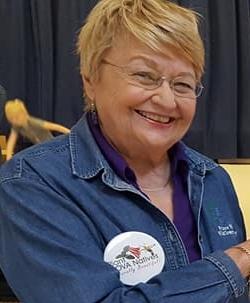 Marion Blois Lobstein is Professor Emeritus of Northern Virginia Community College where she taught botany, general biology, microbiology, and other courses over her 37 year teaching career. She also taught Field Botany for thirteen summers at the UVA Blandy Experimental Farm. For twenty-six years she conducted tours and taught classes for the Smithsonian Resident Associates Program.

This article first appeared in the May-June, 2019 Wild News, the newsletter of the Prince William Wildflower Society.