Worldwide, Iridaceae, the Iris Family comprises 65 genera and approximately 6700-7170 species. The growth forms of this family range from herbs to shrubs with all of our species being herbaceous. The Iris Family or Iridaceae was named by A.L. de Jussieu in 1789. This family was first recognized by John Ray in 1703 as a separate group of flowering plants. The basis for Iridaceae is the genus Iris. Linnaeus is credited with naming this genus is 1753. The name “Iris” is derived from the Greek word for rainbow and is also the name of the Greek goddess of the rainbow. The color variation of iris flowers is like the colors of the rainbow.

References to members of the Iris family go back to antiquity with the Greeks such as Aristotle and Theophrastus and in Roman times with Greek physician Dioscorides in his first century De Materia Medica and the Roman author Pliny the Elder. Iris pseudocorus, yellow iris or flag, was used as an emetic and purgative, and as a source of tannins to dye or tan leather, as well as to make a black ink. The ancient Egyptians revered the iris and used orris root in ceremonies, perfumes, and as symbols of life, victory and power. European herbalists such as Rembert Dodoens, John Gerald, and Nicholas Culpeper of the 16th century wrote about the medicinal uses of species of irises.

In the Flora of Virginia, the treatment of Iridaceae includes two genera, Iris and Sisyrinchium, and 15 species with two varieties. Worldwide the Iris has 282 species that are primarily native to the Northern Hemisphere. In the Flora, there are eight and two varieties treated in the Iris. All of these Iris species except for Iris pseudocorus, yellow iris or yellow flag, and Iris domestica, blackberry or Leopold lily, are native and are found in our northern part of Virginia. Linnaeus assigned binomials to all of these Iris species except Iris cristata, dwarf crested iris, and Iris domestica, blackberry or leopold lily. Iris cristata was described and named by William Aiton in 1789 and also was renamed briefly Neubeckia cristata by R. Alefani in 1863. In that same year Alefani also proposed renaming Iris Verna as Neubeckia verna. In the Flora, there are a limited number of taxonomic changes in this family’s treatment in the floras from the late 19th– early 20th century. Based on DNA research, the primary taxonomic change is for Belamcanda chinensis, the blackberry lily, renamed Iris domestica in 2005 by P. Goldblatt and D. Mabberley. This Asian species has a varied taxonomic history. Linnaeus first assigned the binomium of Epidendrum (an orchid genus) domesticum in 1753 based on an illustration by Engelbert Kaempfer which, in turn, was based on a collected specimen that was a combination of an orchid and a member of the Iris family. In 1914 W. Druce renamed Linnaeus’ species Vanilla domestica (the genus Vanilla is also an orchid genus). To complicate this story, Linnaeus also assigned the binomium Ixia chinense to another specimen of the blackberry lily. Other common synonyms for this species are Belamcanda chinensis by A. de Candolle in 1807, Belamcanda puntata C. Moesch in 1794, Gemmingia chinensis (L.) C. Kountze in 1891, Morea chinensis C. Thunberg in late 1700’s, and Pardanthus chinensis J. Ker Gal. in 1805).

In the Flora in the section “Taxa Treated in Manual”, two Iris germanica, the German iris, and Iris sibrica, the Siberian iris, are included as waifs. Waifs are species that have been observed but are not yet established as naturalized species. Neither of these waifs has been yet documented in our area. Sisyrinchium, blue-eyed grasses, has 80 species native only to the New World. This genus is described in the Flora as “a difficult genus, with a number of 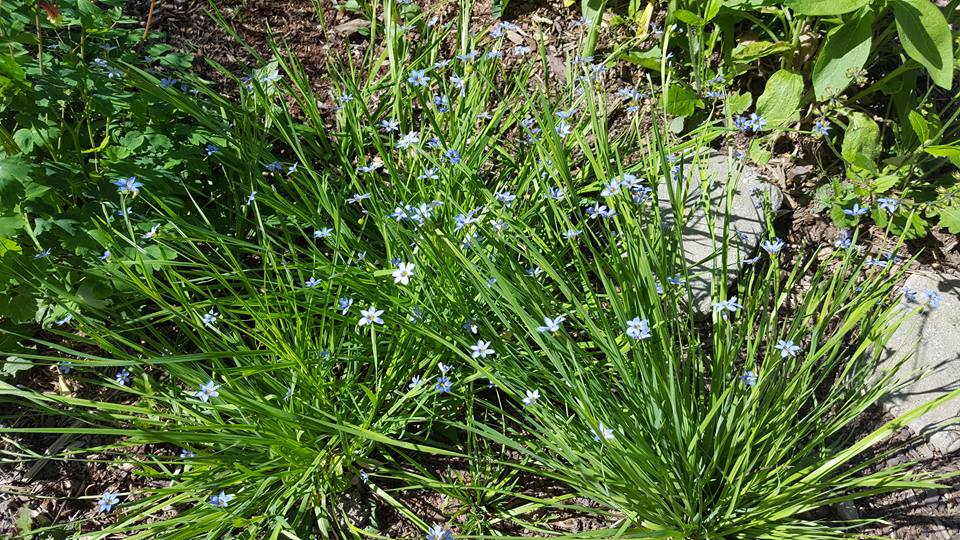 (Note: This article was originally published in the May/June edition of Wild News, the newsletter of the Prince William Wildflower Society.)