Plants that on are imperiled lists today may become missing pieces tomorrow unless action is taken. Do we know which ones are imperiled? Will it make a difference if rare plants disappear? The Virginia Native Plant Society thinks it does, and has taken steps to help conserve some of the wildflowers in our state that are currently at risk.

The problem of missing pieces has preoccupied the thoughts of scientists for many years. When will the final missing piece tear the living tapestry of life’s web beyond repair? Aldo Leopold urges us to keep every cog and wheel as a first precaution. Paul and Marla Erlich gave us the image of multiple rivets holding a plane’s wing onto its body, able to lose many before the wing falls off; but how many? Doug Tallamy used the example of a jenga tower, the game where blocks are removed one at a time, until the final removal causes the tower to collapse.

There are many problems clamoring for our attention these days, some bigger than others.  Preventing the loss of plants in the VNPS Rare Plant Roundup may be a small contribution, but we can say with certainty that every loss matters. We are just beginning to understand the incredible complexity of the relationships plants have with each other, and with pollinators, birds and other wildlife; not to mention their possible benefits, yet to be discovered, for humankind

And who could argue that the loss of this plant would not be regretted purely and simply for its elegant beauty? 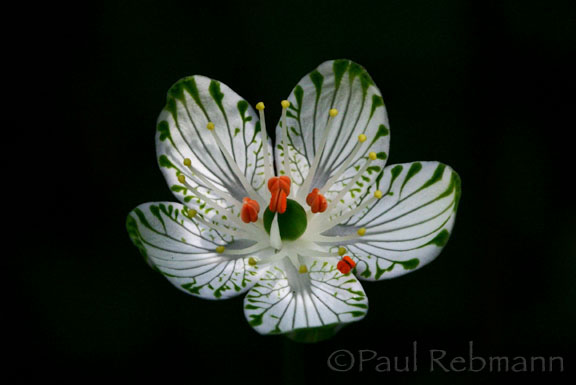 Parnassia grandifolia, known also as large leaf grass of Parnassus, Big Leaf Grass of Parnassus , limeseep parnassia, and bog stars, is one of the plants in this year’s roundup, called The Natural Treasure Hunt II. This treasure hunt  is the focus of the VNPS fundraiser for 2014, aimed at getting funding for locating, mapping, and researching of imperiled plants. P. grandifolia is listed as endangered in Florida and Kentucky, threatened in North Carolina, of special concern in Tennessee, and was last recorded as being seen in Virginia in August of 1972. It is listed by Virginia’s Department of Natural Heritage as G2, S3. What does that mean?

G stands for the Global Rank.

A G3 ranking is defined this way: vulnerable, at moderate risk of extinction due to a restricted range, relatively few populations (often 80 or fewer), recent and widespread declines, or other factors
S stands for the State Rank.
An S2 ranking is defined this way: At high risk of exptirpation from the state due to very restricted range, very limited populations (often 20 or fewer), very steep declines, or other factors

Despite its common name, P. grandifolia is not a grass, nor even grass-like, although each flower does appear singly on its own stalk bearing a single leaf about halfway. Perhaps this appearance suggested a grass to those who first gave it the common name. For much of the year only its basal rosette of shiny, slightly succulent leaves is apparent, and even these may be hard to see among the tangled growth of the fens and seeps they inhabit. The best time to survey for this plant in Virginia is during its blooming season, late August through October. 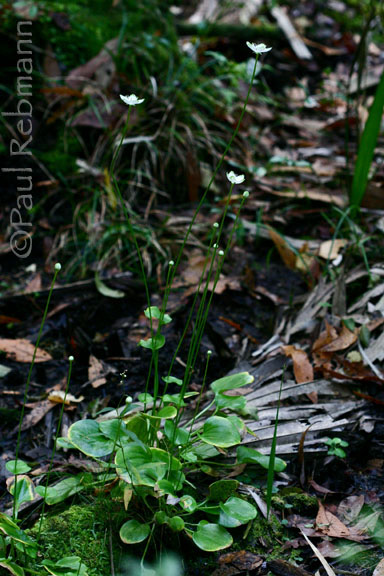 In addition to requiring the moist environment of fens and seeps, P. grandifolia is restricted to calcereous or magnesium rich soils over limestone, dolomite, amphibolite and ultrafafic rocks. Threats to its habitat include destruction from clearing and development, changes in hydrology which divert or stop seepage flow, trampling and grazing by cattle, over-browse by deer, and invasion by exotics.

The flower itself is about one and half inches across, with a striking network of green veins. It reproduces sexually and must be cross-pollinated to achieve seed set. The five stamens ripen and and shed pollen in succession, extending the pollen collection period, but before stigmas are receptive; thus preventing self-pollination.

There are five fertile stamens and five clusters of non-fertile stamens, (staminodia). The fan-shaped, finger-tipped staminodia are distinctive of the Parnassia family. Those glistening tips, along with the ‘runway marker’ veins on the petals attract bees and flies to the center.

Parnassia grandifolia. What will it be – treasure to save, or a missing piece? The VNPS invites you to think about choices, and also offers you the opportunity to help with funding the effort to save plants the Department of Natural Heritage has targeted for attention. Should you wish to donate, any amount is appreciated: Click here. 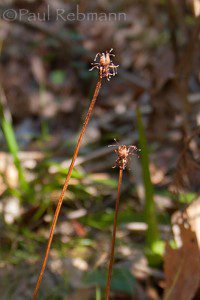