On September 2nd, Dominion Resources, along with its partners Duke Energy, Piedmont Natural Gas and AGL Resources, announced its intention to move ahead and build a major 42 inch pipeline that will stretch 550 miles across three states. It will begin in Harrison County, West Virginia and end in eastern North Carolina. Approximately 450 miles will cross Virginia entering from West Virginia through Highland County in the northwest and exiting to North Carolina through Greensville County in the southeast. A 20 inch lateral pipeline will stretch from Greensville County to the Hampton Roads area.

Construction will require a temporary 125 foot right-of-way in order to dig a ten foot deep trench to lay the pipe, followed by a 75 foot permanent right-of-way. This broad scar in the landscape will cut through the Monongahela and George Washington National Forests and cross the Blue Ridge Parkway and the Appalachian Trail, cut through karst formations in the Shenandoah Valley, cross the historic James River in Nelson County as well as dozens of other smaller rivers, creeks and wetlands throughout the state. It will open up a major pathway for invasive species like Microstegium vimineum, (Japanese Stiltgrass) right across the state. Click here to see map.

Although the specific route has not been finalized, one map on Dominion’s website shows it coursing through Elliot’s Knob in Pastures Virginia, a spectacular alpine meadow area with species like Painted Trillium, Canada Lily, Clintonia, and more. As VNPS member, Lonnie Murray notes, “The whole mountain range around Elliot’s knob has great examples of shale barren communities, including occurrences of the rare Kate’s Mountain Clover….Another very concerning area where the pipeline is proposed is Maple Flats, which has a large number of sinkhole ponds with endemic species like Virginia Sneezeweed that occur few other places in the entire world.  Although now lost, there were occurrences of Arethusa and Eastern Prairie Fringed Orchid in the maple flats area. Highland County harbors some very rare plant and animal species too, including Fishers and Snowshoe hares, both of which were likely stranded there after the last ice age. The pipeline appears to cut very close, if not through, some of the Red Spruce forests.”

The project, called the Atlantic Coast Pipeline (ACP), must go through an extensive permitting process regulated by the Federal Energy Regulatory Commission (FERC). If approved, construction would begin in 2017.

Dominion is already hard at work on the ground. Thousands of landowners received certified letters beginning in April and through the summer notifying them of Dominion’s interest in surveying their land for placement of the pipeline. Surveying has begun where landowners have not objected. In some areas, upwards of 60 percent of landowners are allowing Dominion on their property. In Nelson County, only 25 percent have agreed. Augusta and Nelson Counties are putting up a tremendous fight through organized community action and a new coalition of 22 against torganizations from across Virginia and West Virginia called the Allegheny-Blue Ridge Alliance has formed to fight against the pipeline. You can view their stated mission and members here: Allegheny-Blue Ridge Alliance

At a press conference announcing the project, Governor McAuliffe made a statement strongly supporting the pipeline project. He stressed the benefits for Virginia in job creation during its construction, and that will ensue from new and expanded businesses attracted by an accessible, cheap, “clean” energy source. He thinks the pipeline is very good for Virginia. The Washington Post agreed in a September 6th editorial.

Yet another pipeline, Mountain Valley, has been proposed to run through Southwest Virginia. Announced by EQT and NextEra Energy, this pipeline would be either 36 or 42 inches and run from the fracking fields of West Virginia through Giles, Pulaski, Montgomery, Floyd, Franklin and Henry counties before terminating at a facility in Chatham in Pittsylvania County. As proposed, this pipeline would intersect DCR’s Division of Natural Heritage’s Mill Creek Springs Natural Area Preserve. Here is a description of the preserve from DCR website: “The 222-acre preserve consists of limestone hills drained by Mill Creek. This preserve supports portions of two natural heritage conservation sites, a globally rare Red Cedar-Chinkapin Oak dolomite woodland community, several globally rare invertebrate species and provides water quality protection for Mill Creek.”

In addition to Mills Creek Springs, the Mountain Valley pipeline would run about 2.5 miles from Bald Knob-Rocky Mount conservation site and intersect many conservation easements including the North Fork Roanoke River Nature Conservancy Preserve, a cave conservancy and, once again — like the Dominion pipeline — the Blue Ridge Parkway.

EQT and NextEra have not sought Governor McAuliffe’s approval yet. They too must go through FERC’s extensive permitting process before construction can commence. A local group, Citizens Preserving Floyd County, has formed to oppose this new pipeline project.

In sum, these two pipeline projects propose to pass through some of the most biodiverse regions that occur in the United States. They are recognized as “hotspots” by both the Nature Conservancy and the Virginia Department of Conservation and Recreation’s Division of Natural Heritage. You can read, in depth, about the ecological significance of these regions in Gary Fleming’s Chapter on “The Nature of the Virginia Flora” in the Flora of Virginia.

The danger of the pipelines goes far beyond its immediate impact on forests, habitats and personal property. Dominion and other oil and gas companies want to frack in the George Washington National Forest. To learn more about hydraulic fracking, please see my article on this on our website: Fracking in Virginia.  A Texas oil and gas company already holds leases on property in multiple central Virginia counties that overlay the Taylorsville Shale Basin. If either the Atlantic Coast Pipeline, or the Mountain Valley Pipeline is built, it will increase, exponentially, the pressure from these companies on the Governor and the General Assembly to allow fracking in these areas.

Fracking would cut our forests, literally, into ribbons. In addition, the Governor’s points about increased accessibility to cheap, “clean” natural gas means lateral pipelines, like the one planned to Hampton Roads, will sprout along this big trunk-line to meet the need of new and expanded businesses. Each lateral line has the potential to fragment any existing forests and other natural habitats until the state becomes a spider web of narrow, treeless, mowed areas potentially seeded with exotic grass. In mountainous areas where mowing is not feasible, maintenance to keep trees from growing into the pipes is likely to involve regular use of herbicides, probably applied aerially.

We want to hear from you, our members, about what position you feel VNPS should take on these pipelines. Before responding, it might be helpful to review VNPS’s mission:  VNPS MISSION

OPPOSE – there are several things VNPS can do:

TAKE NO POSITION NOW—This might put VNPS in a better position to influence/mitigate the outcome on pipeline corridor maintenance
VNPS could still engage in action items 2-4 above, but focus on re-seeding the right-of-ways using appropriate native plants, mowing to conserve, and banning use of herbicides except in a targeted way against invasives.

VNPS’ FERC comments could insist that, as part of FERC’s certification, it require the pipeline energy companies to collaborate with the VNPS and the Virginia Department of Conservation and Recreation’s Division of Natural Heritage on appropriately managing and re-seeding the pipeline right-of-ways, and all their eventual tributaries and use part of the estimated $14.6 million in additional tax revenues generated by the pipelines to support this purpose. (The economic analysis that generated that figure was paid for by Dominion and may be overly optimistic.)

OTHER – Give us your thoughts on alternative positions you feel VNPS should take.

Please take a moment to let us know what you think about these pipelines by posting a comment online, or by communicating your opinion to your chapter board, or statewide representative. If for any reason you wish to make a comment privately, email info@vnps.org.

Marcia Mabee Bell, Conservation Chair, on behalf of the
Virginia Native Plant Society Board of Directors 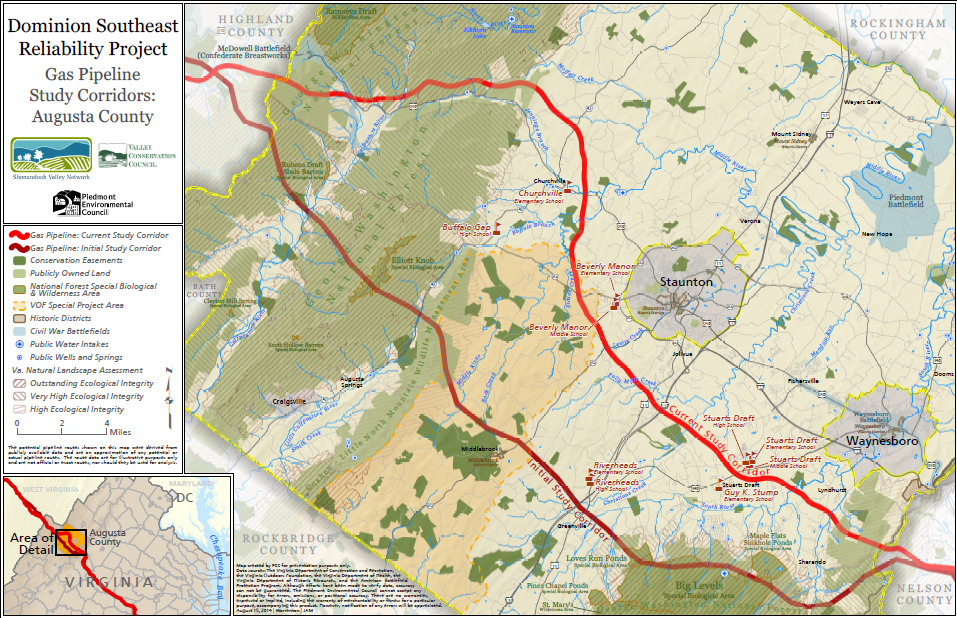