VNPS Conservation Chair, Marcia Mabee Bell, attended a workshop on June 24, 2014 presented jointly by the Virginia Conservation Network and the Virginia League of Conservation Voters. Fracking represents huge changes to our state, its economy, and its environmental health; all of Virginia’s citizens need to become informed about this issue. Here is Marcia’s report:

The main presenter was Rick Parrish of the Southern Environmental Law Center. He talked for an hour about fracking  already occurring in southwest Virginia, and throughout the mid-Atlantic region, as well as the potential for much more fracking in the Commonwealth. 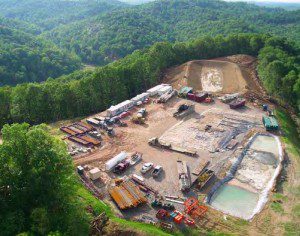 He covered the nature of the technology and its potential to deliver massive new amounts of natural gas, the impact it has on the environment and public health, the laws that are in place that protect the industry from liability, and laws on the books in Virginia that empower local jurisdictions to resist and regulate oil and gas drilling activity. Finally, he provided the audience with avenues for influencing the McAuliffe Administration to carefully evaluate fracking before permitting its growth into the George Washington National Forest and counties east of Fredericksburg, where a Texas oil and gas company owns leases on the Taylorsville Basin.

He urged people to write the Governor and ask him to request the Departments of Commerce and Trade and Natural Resources to conduct an in-depth study of the effects of fracking in Virginia. He said that such a study would take several years, slow things down, and potentially yield some actual, greatly needed data on the real environmental, public health, and economic impacts of fracking.

Following Mr. Parrish’s talk, segments from the documentary film  ‘Gaslands’ was shown,  providing a horrifying picture of what fracking does to people who do not own the mineral rights under their land. Next were brief comments from a representative of the Virginia League of Conservation Voters (VALCV) encouraging attendees to take action by:

3) taking on-line action through VALCV’s website by urging the Governor to begin a multi-agency study of the impact fracking would have in the Taylorsville Basin: www.VALVC.org/action

The workshop is being offered at several other dates and locations in Virginia. Workshops will be held in Richmond, July 15; in Virginia Beach, July 31; in Norfolk, August 19; in Middleburg, September 9; in Fredericksburg, September 16; in Harrisonburg, September 23. Click here for details, scroll down for the workshops: http://www.vcnva.org/

Key points made by Mr. Parrish:

The George Washington National Forest overlays the Marcellus Shale formation, the largest shale formation in North America. It is the watershed for the James and Potomac Rivers which supply drinking water to millions in Virginia. Oil and Gas companies want to frack in the GW National Forest.

The Taylorsville Basin underlies Caroline, King George, King and Queen, Essex and West Moreland counties. It’s shale formation is younger than Marcellus and so the fracking technique must involve using natural and propane gas rather than water to fracture the shale. This is extremely dangerous. A Texas oil and gas company holds leases on areas of the Taylorsville Basin.

A 2004 study by the Environmental Protection Agency found that hydraulic fracking posed no risk to drinking water. In 2005, this study was used by the Bush Administration to justify enactment of the “Halliburton loophole,” which exempts hydraulic fracking from regulation under the Safe Drinking Water Act. Other legislation also exempted the practice used in 90 percent of U.S. natural gas wells, from the Clean Water and Clean Air Act. Consequently, the EPA has no jurisdiction in even evaluating whether a fracking site is contaminating drinking water, despite serious health complaints from people living near, or on top of, fracking sites.

A 2011 Congressional report on the chemicals used in hydraulic fracking, states that the 14 leading hydraulic fracturing companies in the U.S. injected 10.2 million gallons of more than 650 products that contained chemicals that are known or possible human carcinogens regulated under the Safe Drinking Water Act, or listed as hazardous air pollutants.

A key section of the regulations for the Virginia Oil and Gas Act states: “No county, city, or town or other political subdivision of the Commonwealth shall impose any condition, or require any other local license, permit, fee or bond which varies from or is in addition to the requirements of this chapter. However, no provision of this chapter shall be construed to limit or supersede the jurisdiction and requirements of . . . local land-use ordinances…”

Mr. Parrish believes this highlighted section of the Virginia code empowers local governments to resist and regulate oil and gas activity – they cannot regulate the drilling process by law, but they can impose land-use restrictions, he thinks, to good protective effect.

Fracking is already in Virginia and threatens to expand significantly into some of the most environmentally critical areas of the Commonwealth.  It is essential that Virginia’s citizens, especially members of the Virginia Native Plant Society, get informed, stay informed and take action to prevent harm to our natural resources and ourselves.

Read and share the presentation by Rick Parrish
including photos and graphics.