Winter Creeper, (Euonymus fortunei), with its glossy evergreen leaves, is easy to spot in the woods right now. This member of the Bittersweet family, (Celastraceae), is native to China, Japan and Korea. Introduced here as an ornamental plant, Winter Creeper, also known as Creeping Euonymus, has escaped cultivation, according to the National Park Service, and is now invasive in most of the eastern states of the U.S. 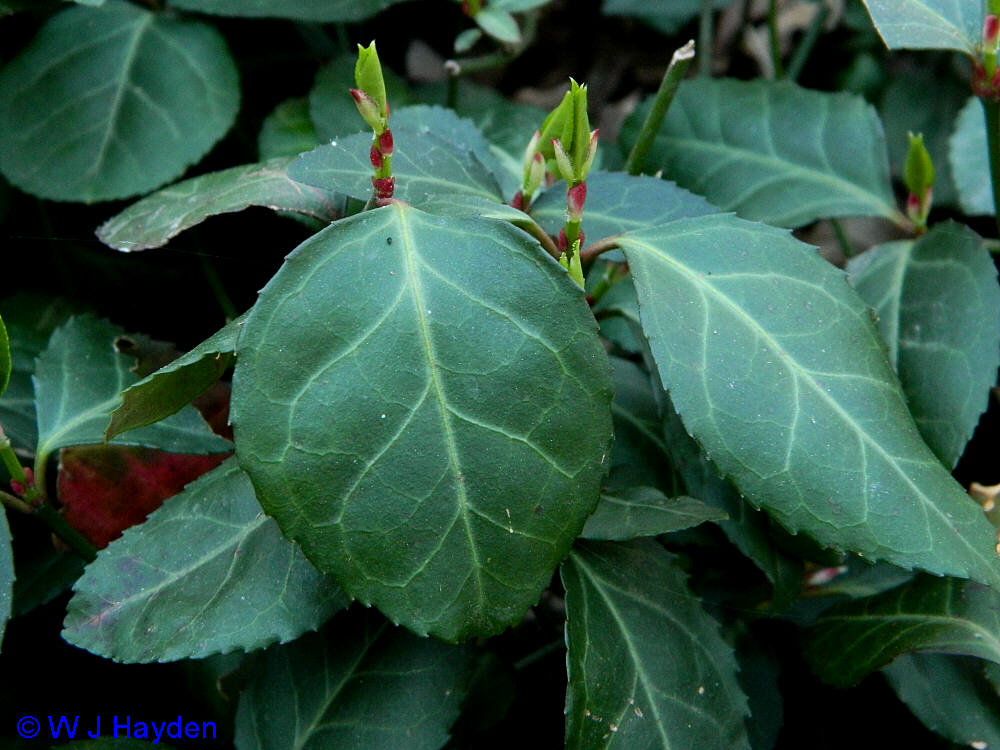 Leaves of Winter Creeper are opposite, with silvery veins, and serrate, or finely-toothed margins; from 1 to 2 1/2 inches long. They are also dimorphic; they have two forms. The leaves that appear on vines climbing upwards may show a widening towards their tips, whereas the leaves of plants on the ground are more narrow at the tips.  The Flora of Virginia states that Winter Creeper is highly variable in form, probably due to the large number of named taxa and cultivars. 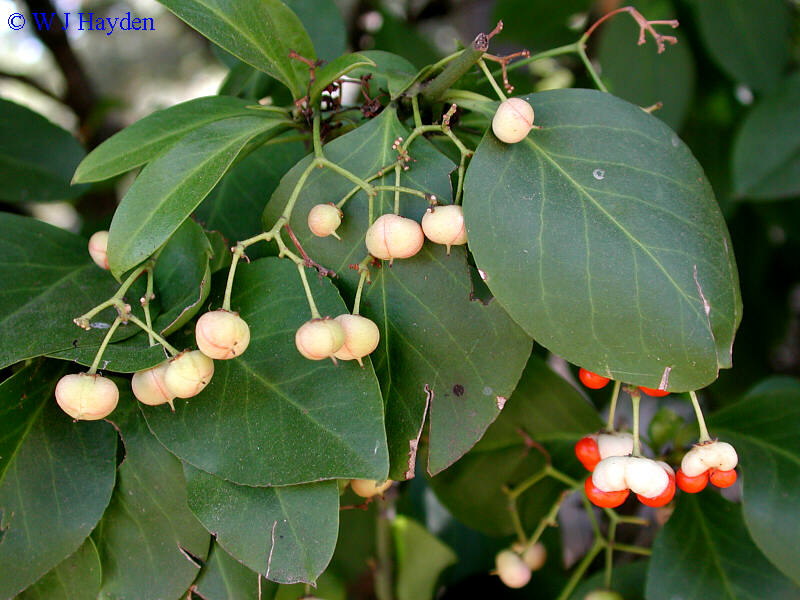 Winter creeper adapts readily to a wide variety of environmental conditions, from full sun to deep shade, from acidic to basic and low nutrient soils. About the only thing it doesn’t do well in is heavy wet soils. It’s a fast growing plant, covering the ground in dense mats, where it smothers the native plants. Aerial roots enable it to climb upwards also; it can reach heights of 70 feet, giving it the ability to kill a tree by overtopping. 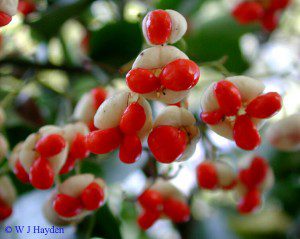 Twigs are green to brownish or grayish, and are not winged, becoming light gray and corky with age. Fruit produced in the fall takes the form of small, round, pink-red capsules that split open to reveal seeds with red-orange arils. Aril is the name for the thickened seed coat where it attaches to the stalk. You may recognize this feature from having seen it on Yew bushes.

Not having co-evolved here with either cooperation, or competition, from the native flora and fauna, Winter Creeper does not provide the benefits that native plants do. Although its seeds are eaten by some birds, it forms a monoculture that displaces the variety of food sources that would have been provided by native plants, including food for the abundance of caterpillars needed by songbirds raising fledglings in spring. Many studies are finding that the food value of non-native seeds is not compatible with what native birds require. The phenology, or timing, of when plants leaf out, blossom, and produce fruit is another is another important component of the contribution of native plants to the ecosystem they evolved in. Winter Creeper: don’t let it creep into your garden!