The Tri-state Native Plant Society Conference at the National Conservation Training Center was a blast this year.  From the venue, to the nightly speakers, to the field trips, everything was incredible, which is why I’d like to first extend my gratitude to all those who contributed and worked so hard to make it happen.  This brief article neither encompasses everyone I wish to thank nor even close to all the things I learned.  My hope is to share a small piece of the experience with some of those who could not be there, and to encourage others to attend future conferences!

Friday night’s speaker, Wes Knapp of the North Carolina Natural Heritage, delivered an on point lecture titled “Looking out to make Discoveries Within.”  The talk highlighted the necessity to be cognizant of regional floras, not just that which lies within the strict boundaries of our own states.  Wes described how doing so has helped him discover many state records in Maryland, which may have never been possible if he had not been knowledgeable of their existence just outside of state boundaries.  The talk was not only powerful, but wonderfully appropriate for the Tri-State Conference, which was meant to encourage collaboration and communication across state boundaries.  Wes is almost finished writing “A Checklist of the Maryland Flora,” which aims to make a list of plants found around Maryland’s boundaries, but never found within the state.  He hopes that other states and jurisdictions will follow his example to help increase the known floras in all of our states, thus helping us to understand their conservation needs. 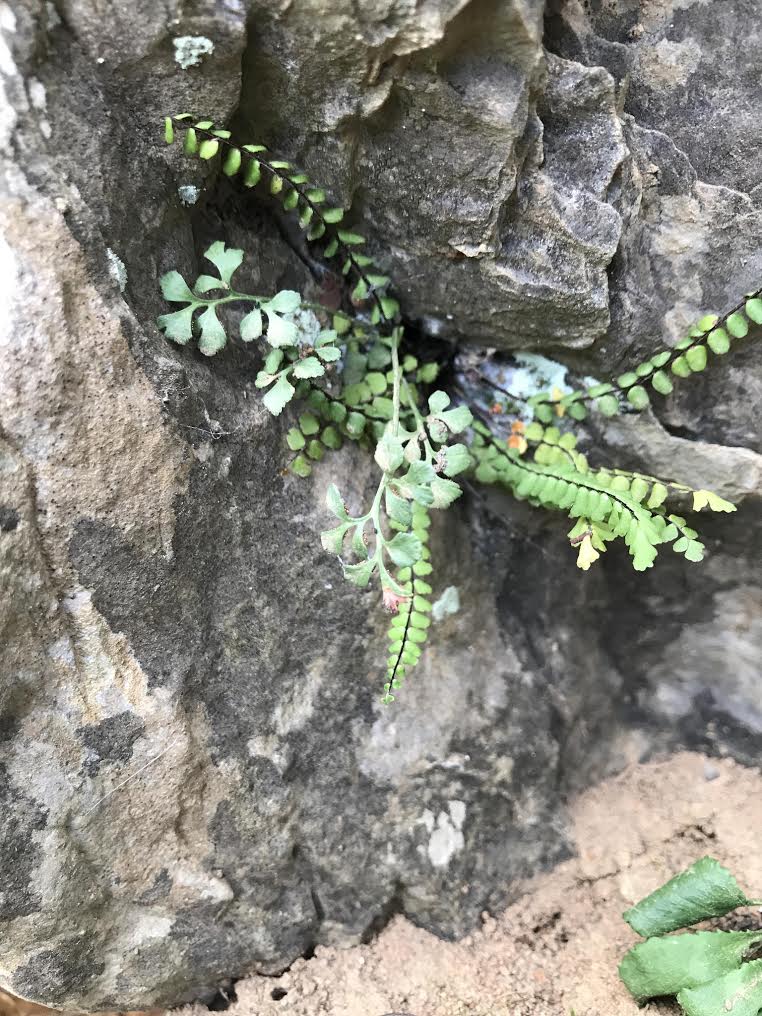 The Saturday field trip I chose was with Rod Simmons to Ferry Hill, an old age forest on a limestone bedrock.  I chose this field trip, primarily because I knew Rod would deliver an awesome experience, but also because we expected to see several species of Asplenium, a genus of ferns which I favor.  Everyone was highly engaged, and together we contributed several new species to the known flora, including several rarities.  The species of Asplenium I looked forward to seeing (and did see), aside from the ever-present ebony spleenwort (A. platyneuron), was maidenhair spleenwort (A. trichomanes), American wall-rue (A. ruta-muraria), and the wonderfully charismatic walking fern (A. rhizophyllum).  They are all calciphiles, and even though none are rare, I have only seen two of these species before.

We also learned about species in the Dryopteris genus of ferns, thanks to Carl Taylor, the so called “fern guy” for the day.  Aside from the common D. marginalis, he identified D. intermedia, D. carthusiana, and their hybrid, D. x triploidea; he elegantly laid out the differences, side-by-side with the leaves, for even the most novice of us to see.  I would have never recognized differences so discrete and am ever-thankful to fern-guy for pointing them out to me, thanks Carl! 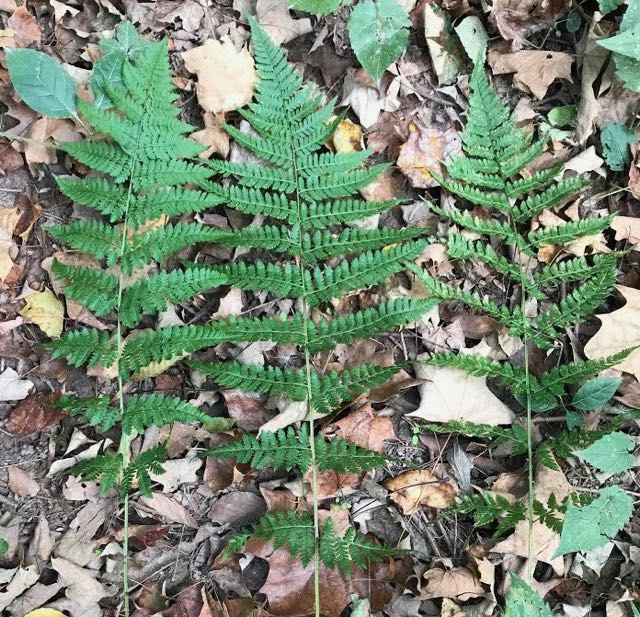 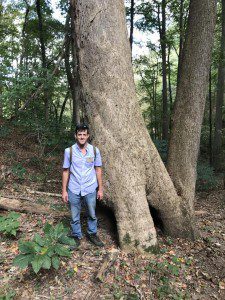 These were only a few highlights from the Ferry Hill trip.  Rod also ID’d many species of Carex, the largest and one of the most difficult genera to learn in our region.  We saw the state champion cucumber tree (Magnolia acuminata) and black maple (Acer nigrum) species.  The rare and infrequent plants we saw included black-seed ricegrass (Patis racemosa), Short’s aster (Symphyotrichum shortii), northern bedstraw (Galium boreale) which is a state (MD) endangered species, leatherwood (Dirca palustris), ginseng (Panax quinquefolius), and more.  Perhaps the most fun though, was hanging out that night over a couple beers and glasses of scotch to talk about all the cool things we had seen that day.  Thanks again Rod, can’t wait for next year.

Saturday night’s speaker was Rodney Bartgis, and he had a powerful, if slightly depressing message for us.  Anyone that has been in this field for some time knows that you can’t be real about the state of our flora without regular reminder of a sad recent history, unfortunately.  The theme was how climate change and human development are impacting our floral diversity.  He began with a synopsis of how geologic climate changes such as recent glaciations have shaped many aspects of our flora, and what this meant about their vulnerability.  How does balsam fir (Abies balsamea) exist in just one place in Virginia?  Why is box huckleberry (Gaylussacia brachycera) apparently sterile, only spreading vegetatively in it’s current range?  And what does speciation of Shriver’s frilly orchid (Platanthera shriveri) have to thank the “climatic pendulum” for?

Bartgis’ take home message included several points about how to conserve diversity, looking forward.  He urged us to

Sunday morning rolled around and I was sad to know I would be going home.  So many incredible connections were made and knowledge shared at the conference this year, I can’t help but get excited for next year.  The last treat was getting to join Joe Metzger on the walk through Catoctin Mountain Park.  Joe’s knowledge of the flora was remarkable, he identified subtle differences in many species which many of us are probably guilty of identifying with a broad sweep.  Some of these included hairy solomon’s seal (Polygonatum pubescens), and several violets in the genus Viola.  Unfortunately I had to leave this trip early, in preparation for my long drive back to Richmond.

Thanks again to all the organizers and botanists who came together to make this conference so special, I know I am not alone in my gratitude for your hard work.  Just as for the 2016 Maryland conference, I can’t wait to use my notes from this conference in the field and classroom to perpetuate the knowledge and passion passed onto me from the conference attendees.  In the end I think that’s the whole point, and for that I will remember this conference as a success! 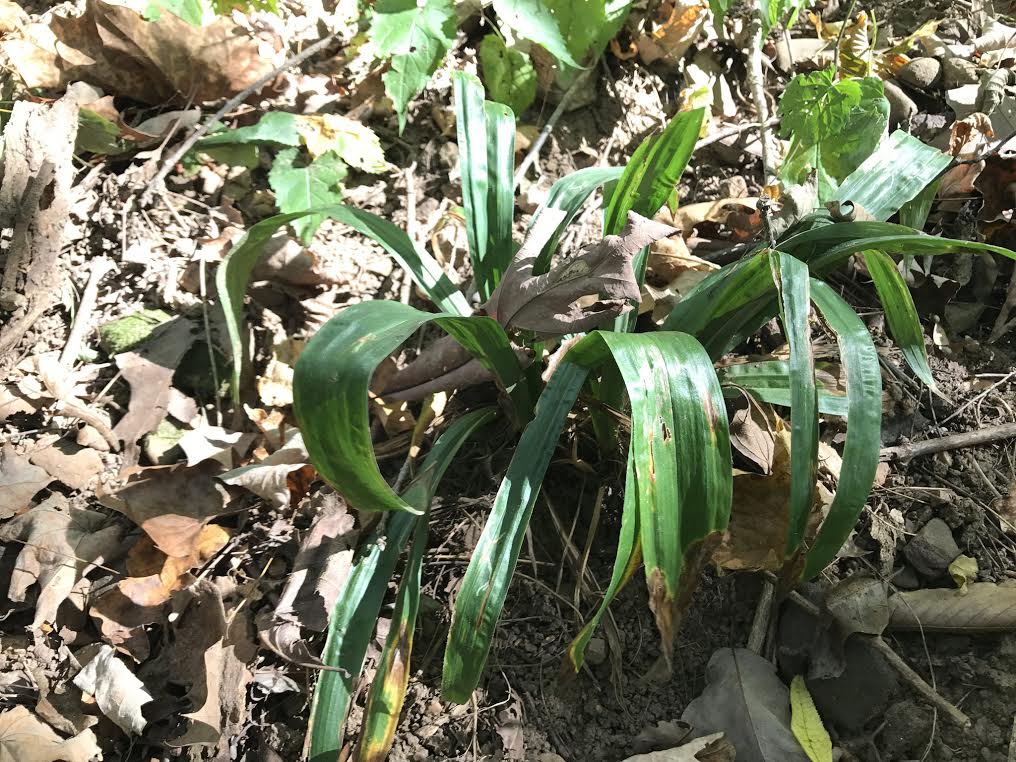