Well, not in Lexington, but they might as well be. A series of unexpected rock outcrops barely on the Rockbridge side of the line provides a case study in plant disjunction and unexpected botanical discovery. * 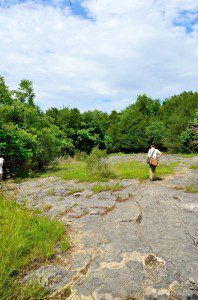 * disjunct – separated geographically, especially the population of a restricted area lying outside a main range


These bedrock exposures – some dozen and a half of them depending on how you count – were discovered recently by Charles Winder, botanist at Washington and Lee. As you might guess, Charles did take full advantage of the magic of Google Earth to locate many of the rocky openings, but to hear him tell it, most of it happened by bike.

What he happened upon while getting some fresh air is a series – a complex, we often say – of flattish limestone outcrops. That “flattish” part is important to botanists around here, mainly because flat limestone bedrock is a scarce commodity, mostly manifested as you approach Kentucky or Tennessee. Finding such places with much native vegetation is an even greater challenge.

These rocks are to various degrees vegetated but in few of them is the gray rock not the dominant visual feature. However, to the extent that grasses, sedges, and forbs occupy them, we will refer to them as glades; our main interest is in the plants, after all.

So, to the plants already. Two of them speak to the oddity of these glades: the showy, pink Widow’s Cross (Sedum pulchellum) and the appropriately named Small Skullcap (Scutellaria parvula), neither of which appears in the Flora of Virginia. Both taxa form extensive populations by making creative use of slight cracks in the rock as well as the slightly more hospitable habitats created by those drivers of change on the rock: mosses and lichens. 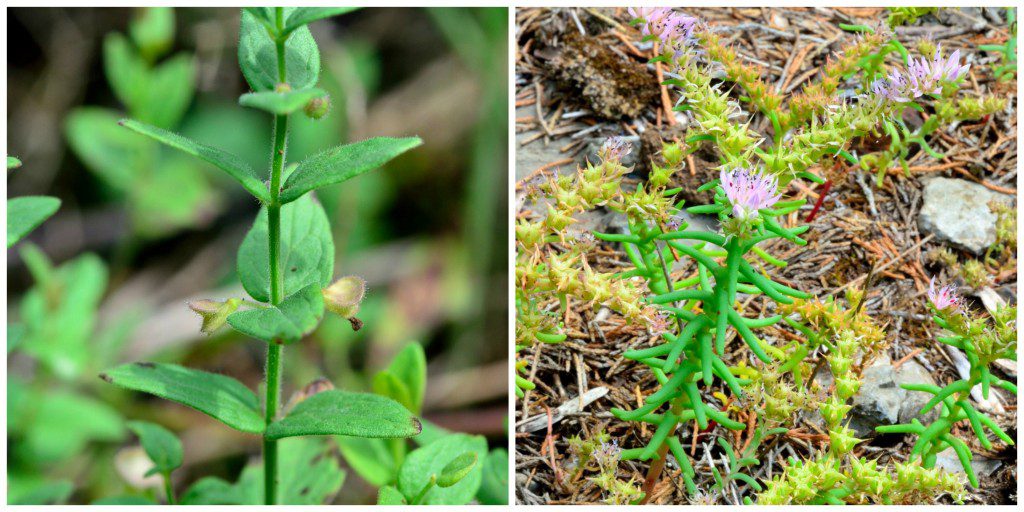 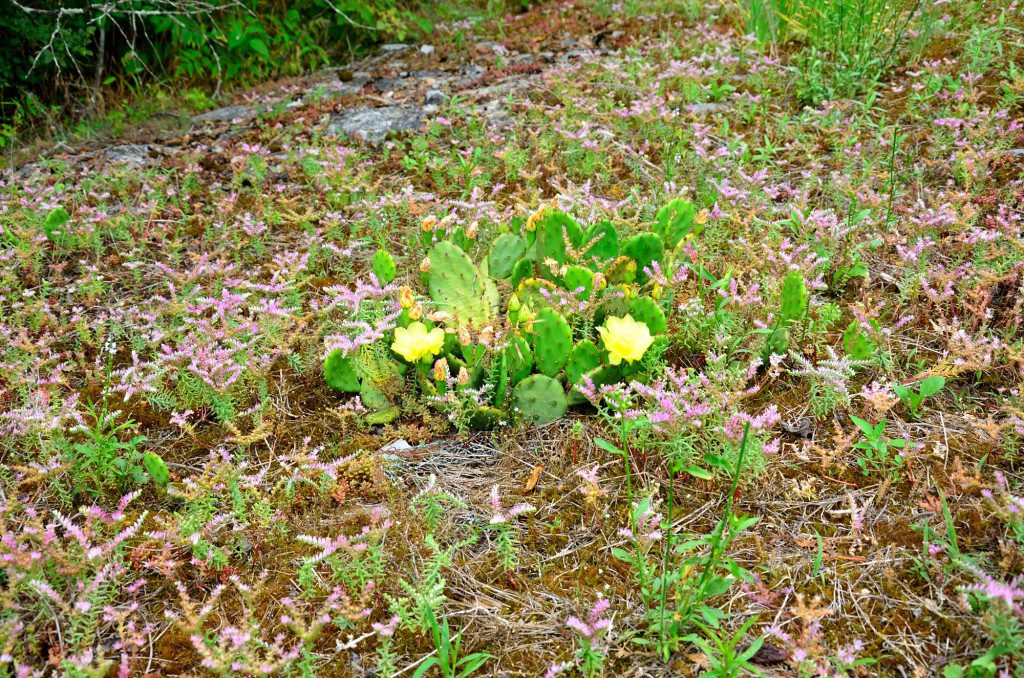 Widow’s Cross is quite unexpected here and has been questioned as a possible introduction; had it been found in Lee County, its proximity to populations in Tennessee would have given it a more suitable context. However, these populations occupy numerous outcrops spread over a several-kilometer area and the plants commingle with a complex of natives, some of them rare and environmentally specialized. Despite the presence of some non-native Sedum on a few rocks, it seems that Sedum pulchellum is one of our residents.

The Skullcap is a fun find, and one on many folks’ botanical radar for years. It is superficially similar to Leonard’s Scullcap (Scutellaria leonardii), a plant known from a southern subset of the Lexington glades, but differing in subtleties of leaf shape, glands, and pubescence. Curiously, no one glade contains both species.

All of these species need open habitats, and not just any old patch of sunlight will do; ‘open’ often equals degraded, weedy, eroded, or paved, after all. 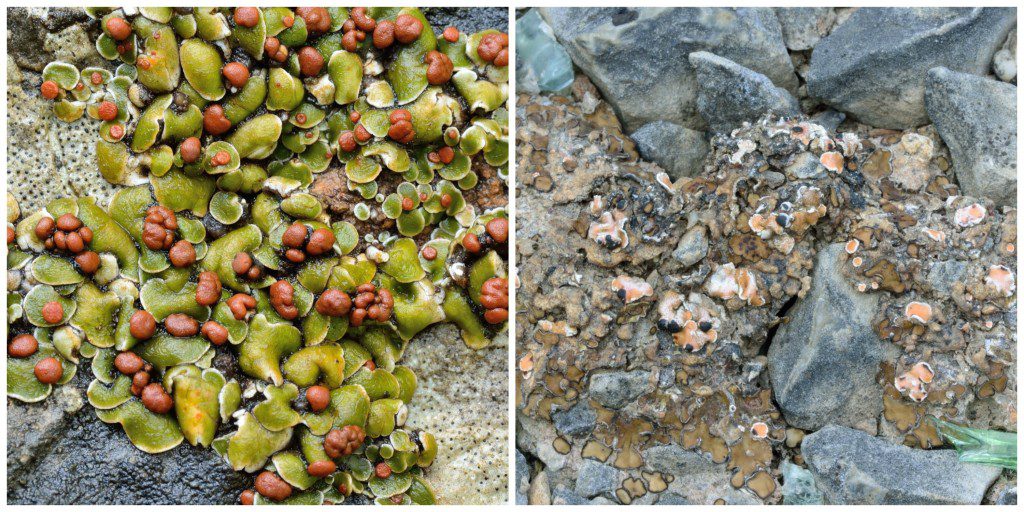 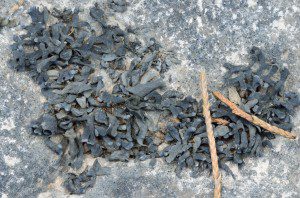 The abundance of flat limestone also makes for strange lichens and bryophytes, some of which have a decidedly western distribution. These standouts in terms of regional rarity, novelty, or curiosity include: Blushing Scale lichen (Psora decipiens), a species with almost no other eastern North American records; Bordered Scale lichen (Psora pseudorussellii ), only recently becoming known in Virginia and more of a westerner; a Stippleback or Leather lichen (Dermatocarpon dolomiticum) which has only been formally described in recent years; and a Jelly Strap lichen with a taxonomically appropriate name for those of us that struggle with identification (Thyrea confusa). This species seems to be affiliated with the central U.S. but, as the monumental Lichens of North America puts it, it remains “too poorly known to be mapped at this time”. Other lichens characterize these rocks, forming unusual patterns and crusts; along with the scattered pockets of mosses, they get by rather well where vascular plants barely get by. 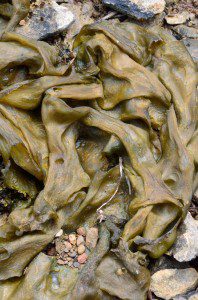 For the sheer wonder of it not much beats Nostoc commune, a colonial cyanobacterium famous for inhabiting limestone glades. It comprises quite a bit of the living matter on the rock in places, and deserves attention for its abstract qualities if for nothing else. Like resurrection fern, it rests when dry as ultra-thin, crispy veils of black-brown on the rock; and is reborn as these amazing 3-D colonies of gelatinous, rubbery blobs when a bit of weather gets its juices flowing

This is all situated in a part of the world worked over hard by axe, plow, livestock, and shovel. Other habitats such as these have certainly been obliterated. The inevitable weeds crowd the outcrop edges, and houses materialize when you least expect them.

To keep a healthy outlook, it is best to concentrate on the novelty and uniqueness of such places, not the general lack of them in our landscape. And you never know – they could be right at your back door.