Two primary characteristics of plants are a light-capturing pigment, chlorophyll, which gives most plants a green color, and the use of this pigment to capture light energy to carry out photosynthesis to produce energy-rich food from carbon dioxide and water. This kind of plant lifestyle is known as autotrophic or self-nourishing. Indian Pipe (Monotropa uniflora), a species of flowering plants that lack chlorophyll, is one you may have noticed growing in rich summer woodlands. It is a member of the Ericaceae (Heath family). This ghostly white species is saprophytic, which means it forms a symbiotic relationship with fungi to extract nutrients from dead plant material in the leaf litter or soil. 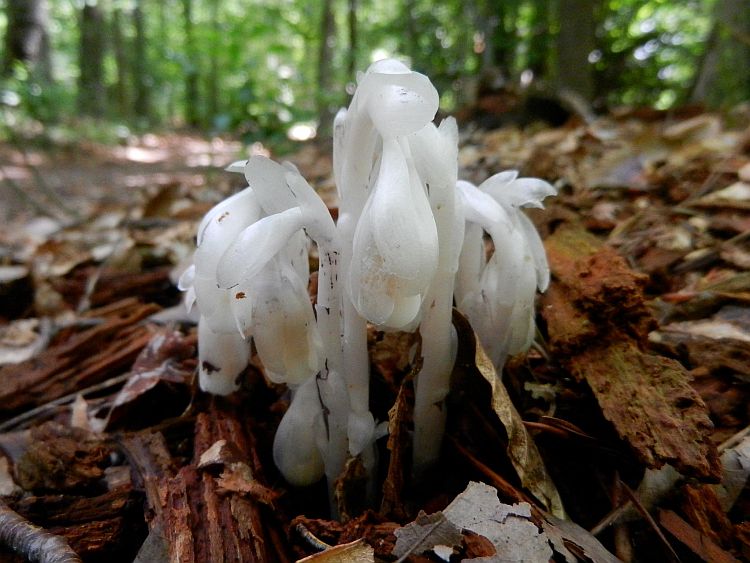 Another way flowering plant species obtain nutrients is to “steal” from a living host. This lifestyle, called parasitic, can be either holoparasitic, where species lack chlorophyll to carry out photosynthesis and depend totally on the host plant; or hemiparasitic, where a species has chlorophyll and is partially photosynthetic but still parasitizes a host plant for part of its nutrients. Three species of holoparasitic plants, members of the Orobanchaceae (Broomrape family), are discussed here:

In the Flora of Virginia and other modern treatments of Orobanchaceae, a significant number of hemiparasitic genera, formerly in the Scrophulariaceae (Figwort Family), are now included in the Orobanchaceae as well.

In the autumn, while walking in Beech woods, you may have observed Beechdrops (Epifagus virginiana), a parasite on Beech (Fagus grandiflora) tree roots, that blooms from September to October. Epifagus means “upon beech,” derived from “epi,” upon, and “fagus,” the genus of beech; virginiana refers to “Virginia.” Beechdrops ranges from New Brunswick west to Ontario and Missouri and south to the Gulf of Mexico. Beechdrops are an annual that forms thin, often purple-tinged, yellow-brown 12-inch or taller stems with scattered scales (reduced leaves). The upper flowers are so-called chasmogamous, or showy flowers, and are one inch long and often sterile. 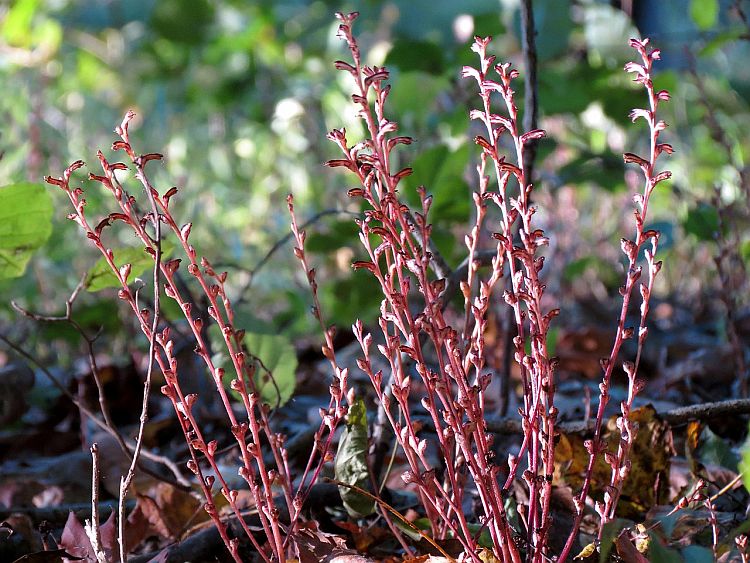 The calyx of these flowers is four to five toothed, the white and purple corolla is bell-shaped and bilaterally symmetrical, with two lips on top and three on the bottom, the stamens are four in number, and the ovary is superior. The lower, smaller flowers do not open. They are self-fertile and are called secret or cleistogomous flowers. Research points to possibly bumblebees or ants as pollinators of the chasmogamous flowers. These flowers may even develop underground. The fruits that form are capsules containing many small seeds. The young seedlings begin to grow into the tissue of the host roots. Special short roots called grappers form, and structures called haustoria develop from the roots. These haustoria “suck” nutrients from the roots of the host plant.

Squawroot or Bear corn, also known as Cancer root (Conopholis americana), a better known member of the Broomrape Family, is a perennial that blooms from May into June. Conopholis means “cone-scale,” derived from Greek for “conos,” for cone, and “pholos,” meaning scale; americana translates as “America.” Squawroot’s habitat is rich woodlands, ranging from Maine to Michigan and south to Tennessee and Florida. It forms a four- to six-inch tall brown, thick stem covered with brown scales that actually are reduced leaves. This cone-shaped structure arises from a thick underground tubercle. The tubercle also forms short roots with haustoria that invade host tissue. 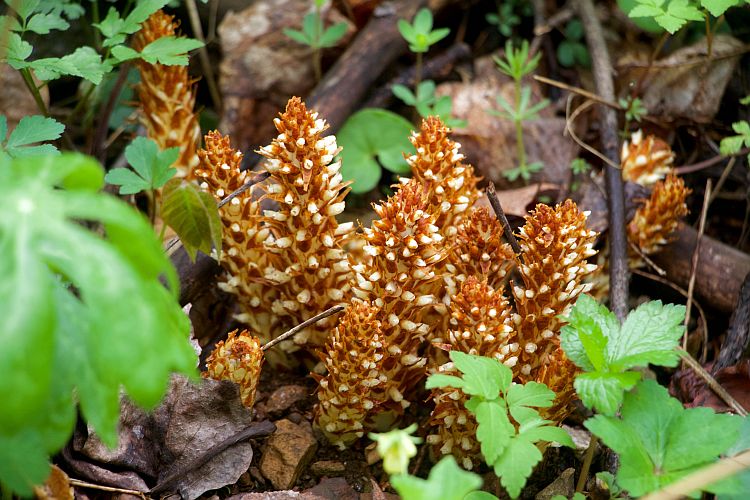 The roots of oak species are thought to be the most common host of Squawroot. The less than one-half inch long flowers located on the thick stem are pale yellow, with a toothed calyx, a corolla with two lips on top and three lips on the lower surface, four stamens, and a pistil with a superior ovary. Bee and fly species are possible insect pollinators, but the flowers may be self-pollinated (autogamy). The fruit is a capsule with many small seeds maturing while the capsule is still sticky, attracting animals to disperse the fruit and seeds. When the plant is in fruit, it resembles an ear of corn and is eaten by black bears and white-tailed deer.

A third member of this family that may be seen in our area is One-flowered cancer root (Orobanche uniflora), an annual that blooms from April into June. Orobanche derives from the Greek “orobos” for vetch, and “ankho” to strangle; uniflora means “one-flowered.” European species of this genus often parasitize vetches or other members of the pea family. The habitat of O. uniflora is rich woodlands; it is found in all of the continental states of the US and in most Canadian provinces. One-flowered cancer root forms an underground ten- to twelve-inch long stem that gives rise to several flower stalks—each with a single flower. Reduced roots originate from the underground stem and form short haustoria called “wart” haustoria. Root systems of various woodland plants are parasitized by this species.

In our area, I have often seen it on Eurybia divaricatus (formerly Aster divaricatus), the White Wood Aster. The one-inch long, bell-shaped flower has a toothed calyx, a white and violet corolla with two upper lips and three lower, four stamens, and a superior ovary. Even though this species’ flowers have nectar lines that would indicate insect pollination, the flowers may also be autogamous. The fruit of this species, like its cousin Squawroot, is also a capsule containing numerous small seeds. 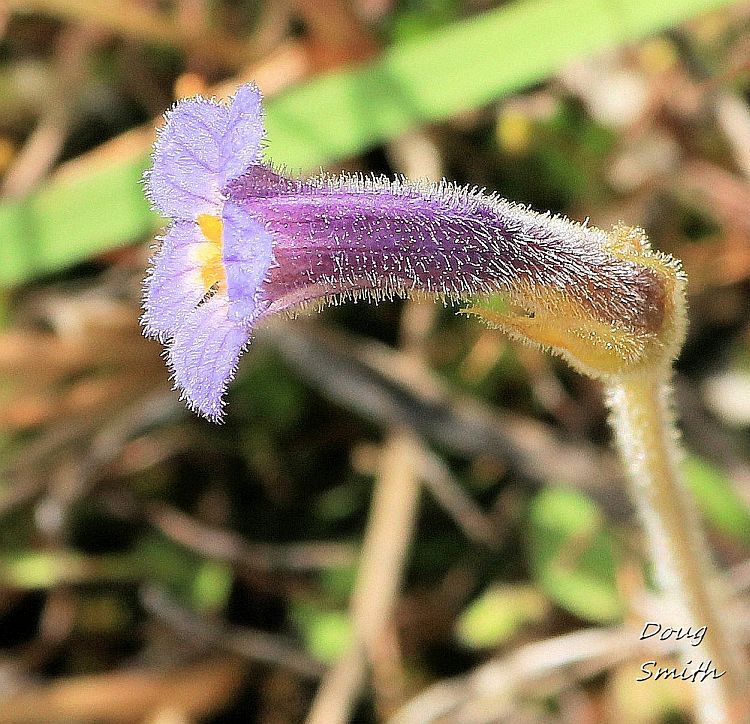 Few edible or medicinal uses of these species currently are used. All three species may be eaten as “survival” food, but are not sought out by wild foods enthusiasts. Traditional medicinal use of Beechdrops has included treating stomach problems, such as diarrhea and dysentery, as well as mouth and cold sores. Squawroot once was used by women to ease menstrual or afterbirth pain and as a uterine stimulant to induce miscarriage. Squawroot also was thought to have sedative and laxative properties and to make poultices for wounds. One-flowered cancer root is purported also to have laxative and sedative properties.

Members of this strange family are indeed unusual flowering plants. The stems and leaves lack chlorophyll, the leaves are usually reduced to scales, and the root system is much reduced with haustoria formed to invade host tissue. These species are dependent on invading the host plant for all nutrients and water. Even their seeds cannot germinate without the stimulation of fungal species associated with the root systems of the host plants. Although these species have little use to humans as food or medicine, they are worth finding to enjoy their eerie beauty and to contemplate their parasitic lifestyle.

Editor’s Note: This article first appeared in the November-December, 2020 Wild News, the newsletter of the Prince William Wildflower Society.