It’s a classic tale of being careful what you wish for. As a high school student in Germany I went hiking with my classmates in the early spring woods. As I unpacked lunch, friends gathered knoblauchskraut at the forest edge, and we then added the native herb to our sandwiches.  “Ah,” I thought. “If only we had this glorious herb in America.” Having spent my childhood in the Arizona desert I had never heard of garlic mustard.

My husband and I bought 10 acres on a pond in Northern Virginia, and as winter’s snow melted I noted the primary groundcover was . . . garlic mustard, which I had long since learned to hate. 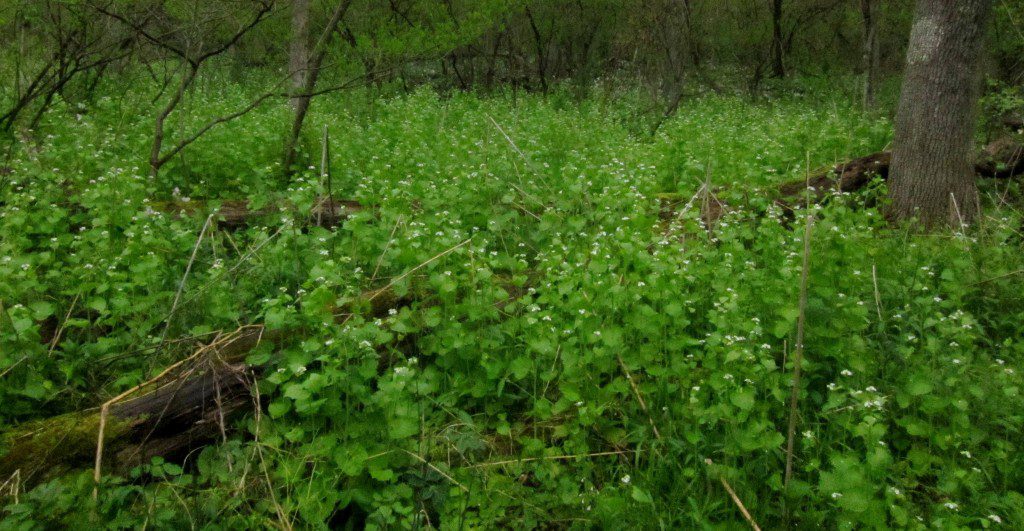 The first spring in our new home, my youngest daughter helped me fill 88 “Lawn and Leaf” garbage bags with garlic mustard pulled from our woods. At some point during the growth 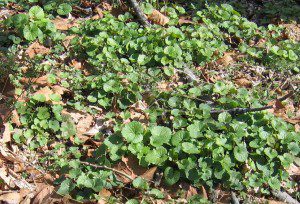 season I began to notice the following: plants pulled in their first, rosette year had significantly longer, thicker roots than did plants pulled during their second, bolt year. In fact, second-year plants already in fruit set had only the smallest of roots left, making them very easy to eradicate. In contrast, due to the extensive root on plants still in their rosette year, I frequently snapped leaf from taproot.

The following summer I took a field botany class at Blandy Experimental Farm, and for my final project I documented the increasing plant biodiversity in my woodlands. This was the early 2000s and the internet wasn’t yet what it has come to be, and I didn’t even realize the two events – removal of garlic mustard and the reemergence of native plants – were linked. In fact, because the class covered native wildflowers, it was only during off-topic reading that I learned garlic mustard was allelopathic, and had been largely responsible for the understory monoculture in my woods. Within one year of reducing the thick stands of garlic mustard, cutleaf toothwart, spring beauty, Virginia bluebell, Jack-in-the-pulpit, green dragon, twinleaf, and many other Virginia woodland natives began to emerge. 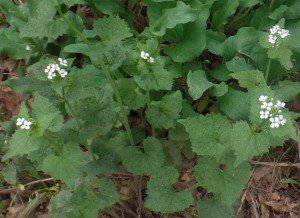 Over the next several years I continued my eradication vigil, and eventually each spring I would scantily fill one 13-gallon trash bag with my nasty harvest.

Not that I returned the land to Eden, mind you. Other, equally unwelcomed non-natives appeared, though never did they manage to create a monoculture.

This past spring I moved to a property on the banks of the Rappahannock River, and in my woods I found garlic mustard.

So you’re now on notice, Alliara petiolata: your days are numbered.