The Virginia shale country has offered up yet another major botanical surprise. In a corner of the state already renowned for its botanical oddities, the winding path leading to this discovery illustrates the value of field work, curiosity, and research in its most literal sense.

In 1936, while exploring shale barrens and woodlands in Douthat State Park, botanists Paul M. Patterson and Lena Artz came across a most unusual violet, one that seemed to take the dissected leaves of the well-known Birdsfoot (Viola pedata) to new extremes. These plants seemed a good match for the Prairie Violet (Viola pedatifida), a species mostly of midwestern prairies; they presented this most extraordinary find in Patterson’s mimeographed Violets of Virginia (1939). Additional populations were uncovered in Alleghany County by Robert B. Platt in 1946 and reported in Castanea, the journal of the Southern Appalachian Botanical Society (1950). The distant removal of these occurrences from the species’ main range and mismatched of habitats certainly merited attention but did not seem to cause too much of a stir in the botanical community.

Fast forwarding to the mid-60s, botanist Norman H. Russell dismissed these reports in his Violets (Viola) of Central and Eastern United States, declaring that the highly variable Wood Violet (Viola palmata) and its close kin were to blame for the misidentification. In the following years, it would seem that the Prairie Violet had been banished to its rightful mid-western home, at least in the minds of botanists.

Leaping again, this time to the 2000s, Virginia Tech botanist Tom Wieboldt enters the picture. Through his work on the Atlas of the Virginia Flora, reports of odd species such as this had to be tracked down and verified for inclusion, causing him to do a little digging in the literature (and later in the soil). With the 1939 Patterson mimeograph eventually in his hand, two things became clear:  1) Patterson seemed to be no slouch when it came to violets and 2) there was enough locality information to track these plants down and give them a second look.

Unlike the nebulous localities garnered from many older herbarium labels – sometimes a phrase like “Indian Territory” might be the collector’s only nod to geography – those concerning the Prairie Violet were fairly clear. Even better, the steep shale hills of Bath and Alleghany were not the sorts of places that invited development; the landscape had a good chance of being intact. Before long, plants matching the description of this lacy-leaved violet were again being eyed by a botanist and duly documented with both photographs and specimens. The initial conclusion by Tom and colleague Dr. Harvey Ballard (well-known Viola expert at Ohio University) was that, yes, Viola pedatifida does occur in Virginia.

Harvey’s work on the taxonomy, ecology, and genetics of violets is widely known and followed. With plenty of pedatifida experience and an understanding of how strange and unexpected the Virginia occurrences were, he decided to include the species in his itinerary during a general Viola research foray in Virginia, 2013.

Arriving at the first shale barren in Douthat, the usual first push upslope through the shale meant some huffing, puffing, and a search for traction. Spread out on the slope, Harvey was clearly excited at seeing such an unusual woodland and some of the regional specialties, particularly those endemic to the Mid-Atlantic shale barren region. Once separated, we began calling out to each other when we found the mystery Viola, happy that some were in flower, and many in fruit. Naturally, it took us a while to reconvene on the steep, eroding hillside. Once Harvey approached, I expected his usual wide-eyed, childlike enthusiasm over the abundance of good study subjects. I didn’t know what to make of his look, which seemed more serious, concerned, perhaps confused. 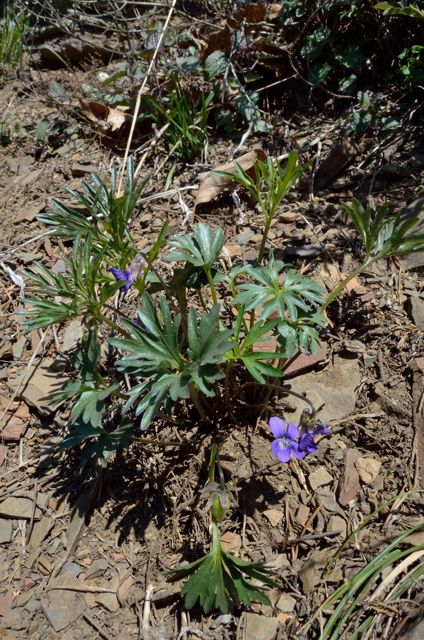 Remarking at how amazing this was, I of course agreed. This would be a perfect place for him to study Prairie Violets far away from home.

But no, he said, this plant is not just another fascinating example of a plant far out of place; this is probably a new shale barren endemic!

In the face of such a claim, skepticism was my main reaction. After all, how could he have already seen photos and specimens of these plants and called them something else? Was he just over-eager? I mostly held my tongue and left it to Harvey to make his case; he wasted no time in doing so. Soon, I was sent detailed tables and photos comparing the “new” violet to pedatifida and other morphological relatives in the genus. Emails flew. Spending more time in the field with him that season only bolstered my confidence in his claim. 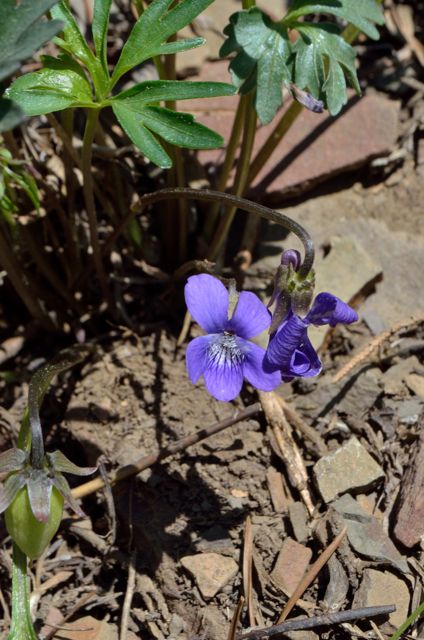 Close up view of bloom 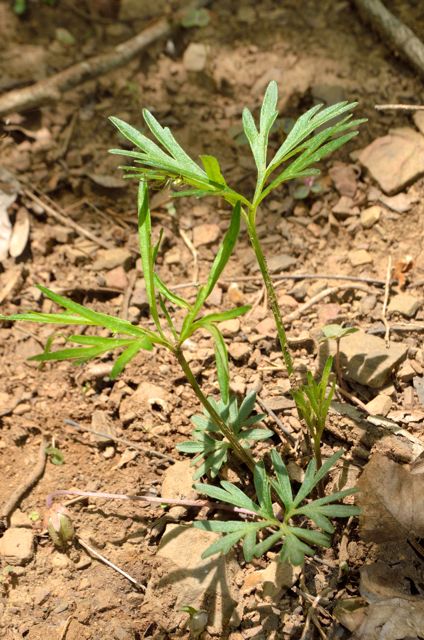 Our interest sparked by the possibility of a new shale endemic, we have uncovered a fair number of new populations, all in similar habitats but only within a tight geographic area. The fact that these sites lie within an area widely known for its plant endemism is obviously encouraging. For example, the world’s only populations of the Millboro Leatherflower (Clematis viticaulis) lie in close proximity to those of the violet. The taxonomic work, however, needs to be blind to all of this.

Harvey and his graduate student are now working on the taxonomic status, ecology, and genetics of this mystery violet as well as studying the ecology of more widespread Viola species in Virginia. Until their work is completed nothing is written in stone, but it does appear we have yet another reason to celebrate the uniqueness of our flora and the many botanical secrets lying in wait.

Editor’s note: Many thanks to Johnny for taking the time to share this experience with us here. The VNPS Fundraising effort this year will go directly to fund research at the the Natural Heritage Program, where budgets have been  slashed in significant ways.  If you wish to help in this effort, there is a Donate button on our Homepage, or just click here, and be sure to mention in the space provided that the donation is for the 2014 Fundraiser.