The genus Smilax is bound to catch your attention one way or another – your eye catches a distinctive green leaf; your nose detects a whiff of something slightly ‘off;’  your skin or clothes catch on sharp prickles as you walk down the trail. Those prickly Simlax  have common names that include the words Greenbrier or Catbrier. The “unarmed” vines, no thorns but smelly flowers, include the words Carrion Flower in their common name.  So they don’t sound so attractive. But in fact, these sturdy vines are hard-working, interesting, and valuable members of Virginia’s ecosystems. 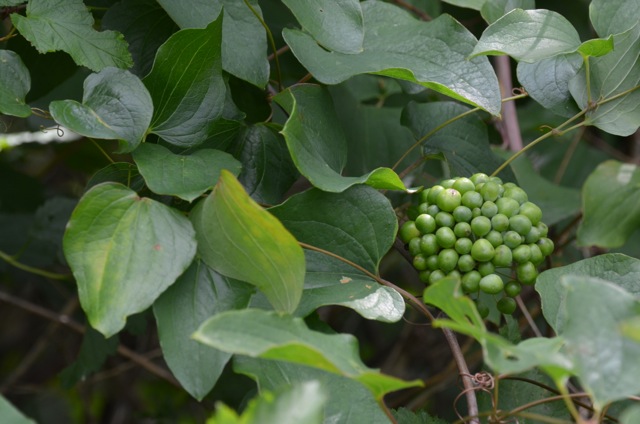 Smilax flowers consist of small green clusters on separate male and female plants. They are inconspicuous on the thorny species. But the Carrion flowers form large spheres that grow into showy orbs of shiny blue-black, pea-sized seeds. Both types are pollinated mostly by flies. The leaves are characterized by parallel venation, and the base of the leaf stalks remain attached to the stem after the leaf drops. The vines of the thorny species remain green all winter, and sometimes retain a few leaves as well. Smilax can sometimes form thick colonies and retard shrubs, but this is part of native plant’s co-evolution, as long as it is happening in a natural area. Like any other vine, it may need to be controlled in a limited or managed space. 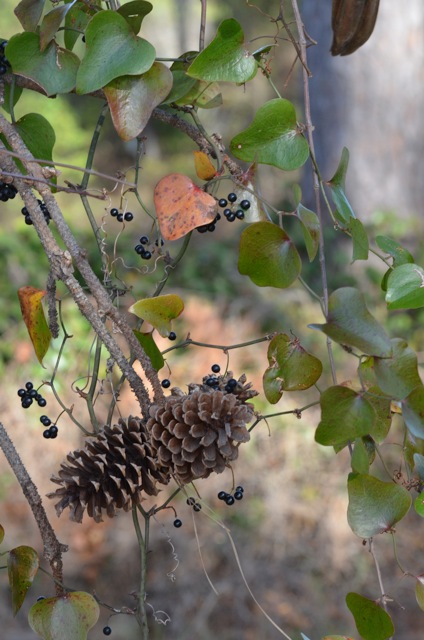 Smilax berries are one of the more  attractive features, both for people and wildlife.  Most of them are blue-black, but a few, like S. pumila, S. auriculata, and S. walterii , sport red fruit.

Although the Smilax species vary in lipid fat content of their berries,  they are all an important source of winter food for birds, including grouse, mimic thrushes, robins, and red-bellied woodpeckers among many others.  Black bears (Ursus americanus!) eat them, too, and occasionally foxes, squirrels and opossums.

The flowers are visited by a number of bees and flies, for both nectar and pollen, and the leaves are larval host for many species of caterpillar moths  including the Curve-lined owlet moth, (Phyprosopus callitrichoides).

White-tailed deer, rabbits, and beavers all feed on the woody stems, leaves, and shoots of Smilax. And of course all the Smilax species provide excellent protective cover.

Another thing that can catch your attention in regard to Smilax is that some of them are hard to tell apart. Some helpful ID characteristics have been provided here by John Hayden, our VNPS Conservation Chair, and Robert Wright, Environmental Scientist and member of the Pocohantas Chapter. 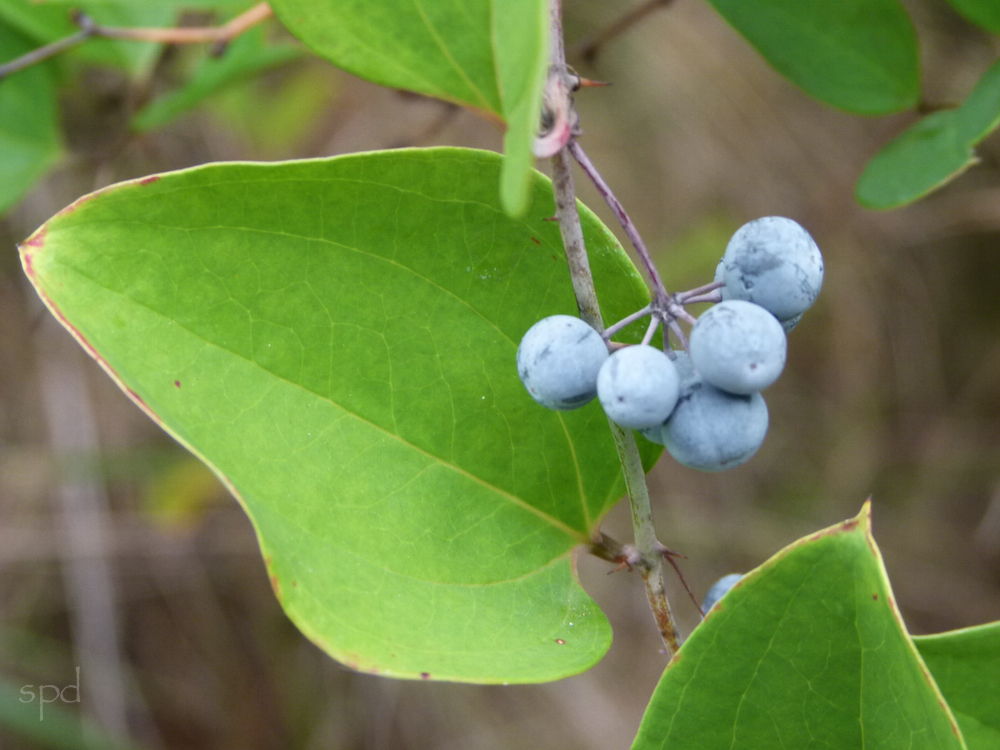 Smilax glauca, Whiteleaf Greenbrier, showing the powdery, waxy bloom that will wear off as berry matures.

This plant was photographed at Pleasure House Point, 118 acres of undeveloped land purchased by the City of Virginia Beach to preserve its coastal habitat. Adjacent to the Chesapeake Bay Foundation’s new headquarters in Virginia Beach, and a great place to visit. Although at first the berries on this Smilax seemed unusual, John explained:

“In addition to glaucous leaf undersurface, fruits of Smilax glauca can also be glaucous. The powdery-waxy bloom, however, does wear off, so only relatively young/fresh fruits of S. glauca will exhibit this characteristic.”

And furthermore, Robert added this:

“There is one surefire way to separate S. glauca from all other Smilax at any time of year: The base of S. glauca  main stem is like no other Smilax; it is extremely bristly with many short, terete, dense, needle to awl-like flexible prickles (almost brush-like)—not at all like the mainstem recurved, claw-like spines from which the Catbrier gets its moniker. The similar S. hispida has flattened spines that are usually sepia to black, and are stiffer, but can be brush like.

Another sure fire way to determine species is by microscopic study of the cell structure. Back in the 1960s, Wilbur Duncan (and some grad students) at U. of GA did a great deal of morphological and cellular research on Smilax, building on previous work from the 1940s-50s, and came up with lots of sound ways to discern Smilax on the basis of leaf cells. But lacking such a device in the field, there are many other ways to tell the plants apart, ways that aren’t in the books; such as testing initial fruit flavor and ‘aftertaste.’  Field biologists must rely on every scrap and detail they can to make positive IDs, often in less than ideal field conditions. So I started looking at the Smilax plants at the ‘natural philosophy’ level, back to the future so to speak. It was very fruitful.”

So, yes, smile. It may be smelly or have thorns, but it’s intriguing, beneficial, and native. It’s  Smilax. 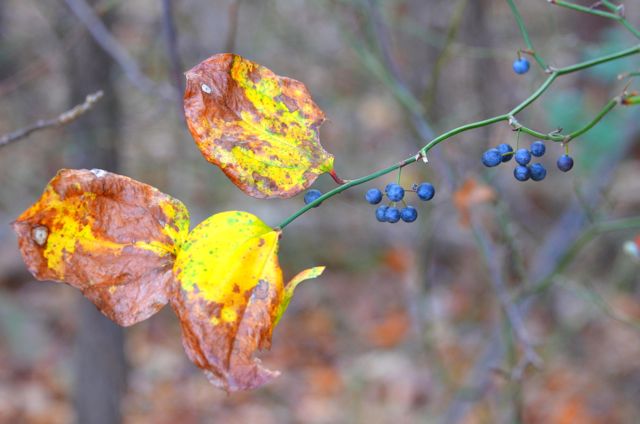