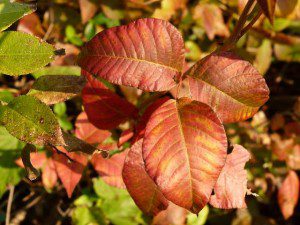 Poison ivy is a beautiful red color in fall.

Virginia is the pioneer state on this one, but we are pretty sure others will be following our lead by next year. California already has a Annual Poison Oak Show each fall, but we have a ways to go before we can catch up to that.

First relevant fact. Nothing gets more comments on our Facebook page than a post about poison ivy.

People hate it. With Passion.

Or . . . they love it. But here’s the second relevant fact; Toxicodendron radicans is a native plant with an important place in the ecology of our natural areas.

You don’t need to have it your garden. I don’t recommend it for your garden.  But don’t remove it, or disparage its place in our natural areas, either. A great many animals use it for a variety of purposes. The songbirds count on it as a reliable food source in winter when other things are scarce. Other animals eat the berries, too, and the leaves and twigs. Its blooms are a great nectar and pollen source for bees. It’s a protective sheltering spot. 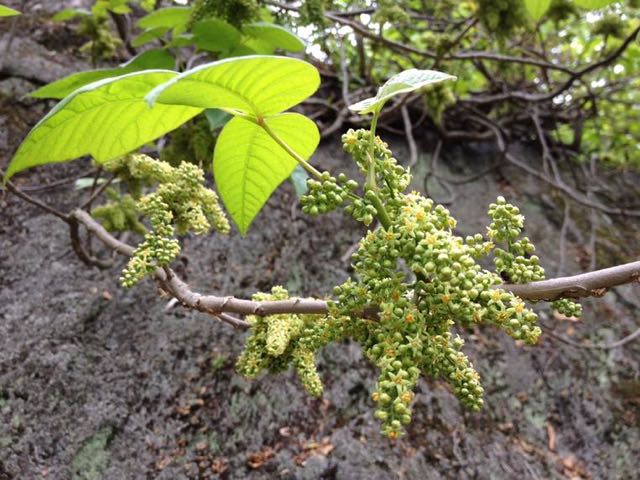 Blooming poison ivy sends out a sweet fragrance appreciated by people, and the blooms provide copious pollen and nectar for bees. ~Photo by Fritz Flohr Reynolds 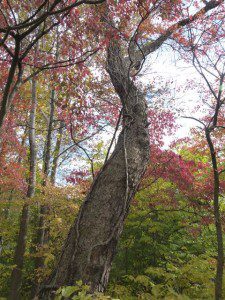 Those sturdy vines do not, repeat, do not, hurt our trees the way non-native invasive vines do. In a natural setting, the vine does not get too heavy for the tree, or shade out the sun, or injure the bark.

Now, I know, from comments on Facebook, that there ARE instances where poison ivy has “taken over” in the way that an invasive plant can do, crowding other native plants. But those places are all in spots where humans had already altered the landscape so radically that the natural processes of checks and balances could not function. Don’t blame the plant. 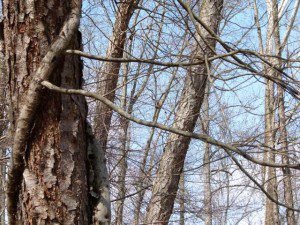 Poison ivy can form outreaching branches when it becomes mature. Thus it becomes ‘arborescent.’  We learned this on a walk recently with Rod Simmons, Natural Resources Specialist in Alexandria.  At the tips are the remains of last year’s flowering and fruiting. The wind was blowing and I was in the back of the group; I thought it sounded like he said it was called ‘poison ivy fluff,’ but this seems unlikely. Rod? 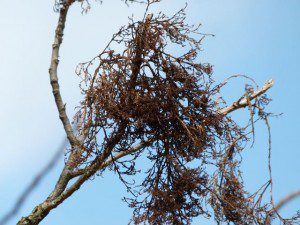 For your amusement, I leave you with some rhymes pertaining to the ‘do not touch’ relationship we humans have with poison ivy. We appreciate its virtues…from a distance.

Fingers of three, let it be.

Leaves of three, let it be.

Only a dope swings from a hairy rope.

Hairy vine, no friend of mine.

Of all these, the last seems the biggest stretch. After all, in spring many emerging leaves are red. And for most plants, including poison ivy, that phase does not last long.  Now admit it, they ARE pretty! And those hairy roots are not penetrating the bark to harm it the way Hedera helix, english ivy does. 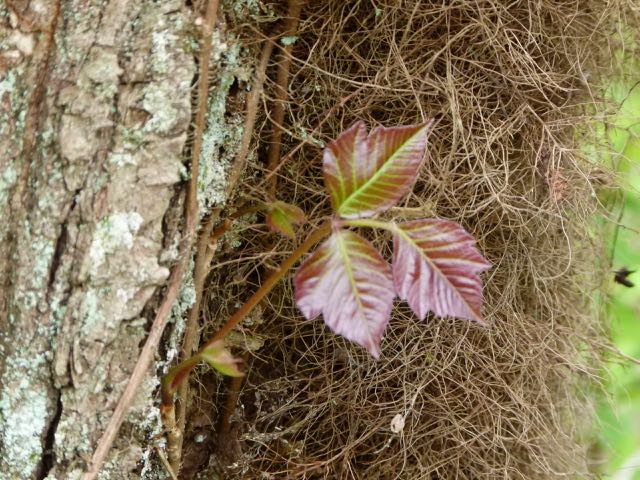 The very earliest leaves of poison ivy show shiny and red at first.