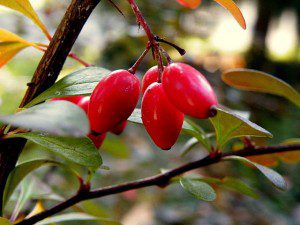 Japanese barberry, (Berberis thunbergi), arrives in the woods by birds eating the fruits in winter and pooping/planting them. It can grow in full shade and established woods. Nobody, (especially not deer), eats the leaves or the prickly twigs. It can root where branches touch the ground and where seeds are dropped in place to make eventually an extensive, dense cluster. Its leaves break down quickly and raise the nitrogen level in the soil, encouraging earthworms and discouraging native woods plants. It offers mice shelter from predators, encouraging them to congregate and share germs. Its dense foliage keeps the area underneath it moist so that ticks can be active almost all the time.

So that’s why I pull barberry at Fraser Preserve every January & February. 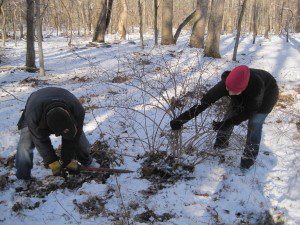 Potowmack chapter removes barberry at Fraser last year. A little snow is helpful, but you can’t pull barberry if the ground is frozen.

I’ve often said that we can work with snow on the ground. Snow actually insulates the ground and keeps it from freezing; it also increases contrast and helps you spot the small barberry sprouts. But we can’t work when the ground is frozen. Last year I had to cancel half the work sessions I’d scheduled because of frozen ground: you just can’t pull plants from frozen ground. The tops just break off and leave the crown of the plant behind, which leaves it alive and harder to pull the next time you try. Other years only one or two scheduled workdays have had to be cancelled: we really don’t get a lot of ground freezing around here, especially not in the woods with a good layer of leaf litter. The barberry at Fraser is not found in bare ground locations where the ground would freeze more readily.

Barberry is what Alan, (Alan Ford, Potowmack Chapter President), calls a “crown plant:” you kill it by removing the junction between the topgrowth and the roots. Often it’s easiest and causes less soil disturbance if you clip the roots and just remove the crown. It does not grow back from bits of root left in the ground. It does grow from seeds dropped under larger plants, so that it is very worthwhile to return to places where there were large plants or patches to pull sprouts until the seed bank is exhausted — I don’t have statistics on this, but most of them are gone after 3 years of sprout-pulling.

Read the Potowmack Chapter Newsletter, which includes information about helping to remove barberry this winter at Fraser: Potowmack News Jan-Mar, 2016