Lara Call Gastinger, lead illustrator of Flora of Virginia, an illustrated catalog of more than 3,000 plant species, will be giving a talk called “Illustrating the Flora of Virginia.”  The lecture is being held in conjunction “Clayton & Catesby: Botanical Virginia,” an exhibit at Jamestown Settlement running from December 5, 2015 to February 28, 2016. The lecture begins at 4:30 p.m. in Jamestown Settlement’s Robins Foundation Theater and is free with museum admission. On Thursday, January 14, Ms. Gastinger will also give a workshop“Learning to Use Pen to Illustrate the Flora of Virginia.” 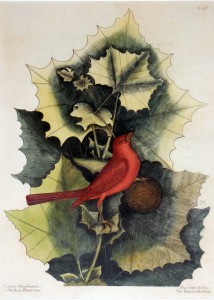 The beauty and variety of Virginia plant life is showcased in a three-month exhibit opening December 5 at Jamestown Settlement. “Clayton & Catesby: Botanical Virginia” explores documentation of native plants by naturalist Mark Catesby and botanist John Clayton in the 18th century and the Flora of Virginia Project in the 21st century.