Our partners at Virginia Working Landscapes are conducting important surveys this summer, and Celia Vuocolo, their Plant and Pollinator Survey Coordinator is making a special call to readers of this blog for their help. In her post, Celia will tell you about the reasons for the research being done, and what it takes to become a participant. Here is an excellent opportunity to make a significant contribution to the shape of our ecological future, and to grow in your own knowledge and experience as well. Celia begins with a bit of background on the VWL’s raison d’ etre, and then lays out the details for how, what, and when for the time commitment for survey participants. Read on! 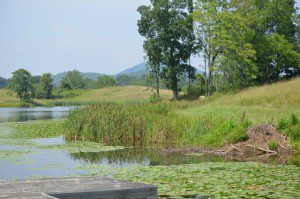 Although Virginia was mostly forested in pre-colonial times, it also contained beautiful native grasslands. These grasslands were not as expansive as the Great Plains, but were home to a suite of native plants – including warm season grasses (WSG), and the pollinators, birds, and other species that depended on them. In the past 200 years our agricultural tradition has changed the landscape from nearly continuous forest to a mosaic of forests, grasslands, pasture and croplands. Although these practices likely benefited some grassland species by opening up the landscape, much of these native grasslands have since been lost through historic conversion to Eurasian cool season grasses (CSG; for livestock pasture use), intensive land management, and more recently, invasion by non-native plant species.

Accordingly, many of the native plants, pollinators, and birds that depend on native warm season grasses have declined over the last half century. As is the case across most of the eastern U.S., farmlands and associated grasslands in Virginia have been disappearing over the last 50 years – lost to forest succession and development. Today, about half of the Commonwealth is forested; about 30-40% is grassland, pasture, and croplands, with the remainder being exurban or urban development. As the quality and quantity of grasslands decline, much of the biodiversity that supports and regulates our agricultural economy is lost.

More than 20 years of research has confirmed what farmers have long known: that a richer, healthier, more diverse landscape is more productive and generates higher quality output. In other words, biodiversity and the benefits of nature that come from it are essential for our individual and shared economic welfare. To that end, conservation biologists have become increasingly interested in sustaining biodiversity on private working landscapes. In Virginia, the overwhelming majority of working lands are held in private hands – more than 90% of Virginia is privately owned. Therefore, private landowners are both the keepers of their own economic well-being and the stewards of the public interest -the shared future of Virginia.

Virginia Working Landscapes (VWL) was formed in 2010 as a network of partners, convened by the Smithsonian Conservation Biology Institute (SCBI), to study and promote the sustainable use of Virginia’s landscapes for native biodiversity through

It began in response to a grass-roots demand from local landowners and citizens for information from the SCBI on best practices for conserving biodiversity on predominantly agricultural landscapes. At the program’s inception in 2010, grasslands were selected as the first focus of study because they were the least well known among the working landscape types (e.g. forests, wetlands, streams and riparian zones) in need of conservation research. SCBI and VWL partners then began a long-term study on important indicator species groups (plants, pollinators, and birds) to examine the relationship among pasture and grassland management practices and the diversity of these indicators, particularly, native warm season grasses. This study was designed to inform the development of adaptive best practices for sustainable land management. Smithsonian scientists and interns, George Mason University graduate students, and a network of trained citizen scientists have just completed the fifth year of the VWL Grassland Biodiversity Survey. 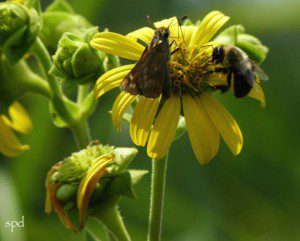 VWL is gearing up to start its 2015 survey season, and the program is in need of citizen scientists to assist in grassland plant and pollinator surveys. Some knowledge of plant identification is required, but you need not be an expert! The grassland plant survey season is comprised of two survey periods in early and late summer. The early period is from June 1-July 1, and the late period is from July 27th to September 1. Citizen scientists are required to attend a training session, which is being held at SCBI on April 25th, from
9am- 12pm. Citizen Scientists choose a partner and two sites for the summer, and survey each site once. Surveys take roughly 2-8 hours to complete, depending on the site and volunteers. Citizen scientists are responsible for inputting their findings into an excel spreadsheet at the end of the season.

This year’s pollinator surveys are set up as two separate projects, and volunteers are encouraged to sign up for both, but it is not required. A general pollinator survey will be conducted from
June 1- July 15. Blue vane traps will be set out on participating properties and collected every 2 weeks. Volunteers will be trained on how to clean and pin specimens, which will be sent out to be identified.

The second project is new to VWL this year, and will focus on studying population genetics and parasite infestation rates of rare and common bumble bee species. This project was borne out of the exciting discovery of a Rusty-patched Bumble Bee (Bombus affinis) last year at Sky Meadows State Park, one of VWL’s survey sites. The Rusty-patched Bumble Bee has not been seen in the mid-Atlantic since 2006, and is in decline across much of its range. This project will focus on collecting data on the Rusty-patched Bumble Bee and the American Bumble Bee (also in decline), along with a few other common bumble bee species. Volunteers will be trained to identify 11 species of bumble bee in the field, and how to capture and handle them. Volunteers will also be trained on collecting a tarsis  (for DNA analysis) and a fecal swab (for parasite analysis). Parasites, such as Nosema bombi, have been identified as a major cause in the decline of several bumble bee species.

Interested folks do not need to have any prior experience identifying bumble bees, but will need to attend two training sessions. The first is on May 9, from 9am-12pm. Volunteers interested in the general pollinator surveys will also need to attend this training.  The second required training for the Bumble Bee Project will be held on June 20, from 10am-2pm. Field collection methodology will be practiced at this time, and T’ai Roulston, a local bumble bee expert and curator of the Blandy Arboretum who is heading up this project, will be on hand to assist volunteer training.

If you are interested in, or have questions about either the plant or pollinator surveys please contact Celia Vuocolo, MSc. Candidate and Plant and Pollinator Survey Coordinator for VWL at VuocoloC@si.edu or 540-635-0038.